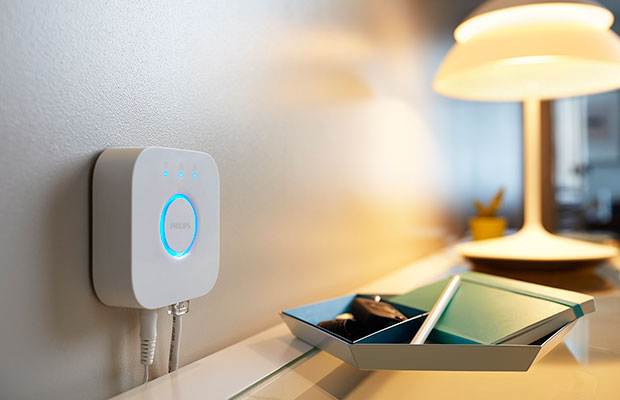 Philips on Monday unveiled Hue Bridge 2.0., which integrates the company’s smart home products and iOS’s HomeKit, giving users the ability to dictate to smart things from a Siri-enabled smartphone.

Replacing its round predecessor, the square Hue Bridge 2.0 is compatible with Philips’ legacy smart lights and controls. The hub will support new smart products from Philips for the foreseeable future.

It’s a mutually beneficial relationship: HomeKit can reach Hue lamps and lights, while homes already kitted out with Philips’ smart lighting gain the ability to automate their Internet of Things devices via iOS.

The Hue Bridge 2.0 supports connections to up to 50 smart things and is compatible with more than 450 apps.

Consumers can pick up the Hue Bridge 2.0 by itself for US$59, or they can purchase the hub in a $199 starter kit, which includes three Hue lights.

With Siri and its connection to HomeKit, users can activate or deactivate custom lighting schemes. For example, users can direct Siri to turn on lights along the path to a bathroom or go full power with the lighting in a home office.

With the help of the Hue app, users also can call on Siri to control their lighting remotely. The lights can be linked to the Web, newsfeeds and email inboxes.

In the Way of IoT

Philips is one party in a growing list of IoT and smart home players. Despite the efforts of Philips and the likes of Google and Apple, the market for smart things is far from mature.

Among the biggest barriers to the smart home movement are “ease of use and compelling value,” said Charles King, principal analyst for Pund-IT.

“The first one is fairly straightforward, but the second can be harder to find,” he told TechNewsWorld. “Suffice it to say that there are lots of solutions out there that developers considered smart, which were, in retrospect, pretty dumb.”

Another issue is reliability and the perception thereof, said Matt Swatsky, director of product management at Lutron Electronics.

“The things have to work,” he told TechNewsWorld. “You don’t want to have to reboot your lighting. So we think those three things are super important.”

There’s also the hurt from the hype.

“The other thing standing in the way of smart home tech,” said King, “is gun-shyness among consumers who have been burned numerous times by next-big-thing gizmos that turned out to be total duds.”