Pinning Down the Matter/Antimatter Particle Just Got Easier 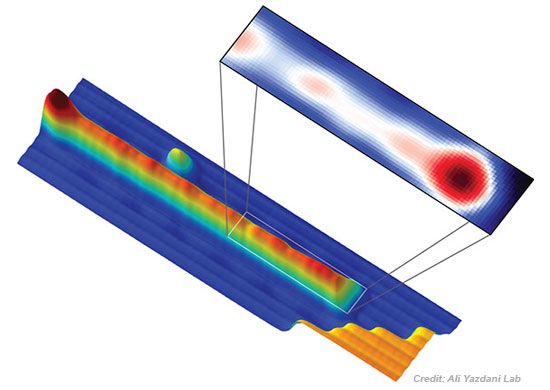 “Theorists have proposed that Majorana can emerge at the edge of some superconductors as quasi-particles, and manipulating them can be used to test their properties as well as building interesting quantum systems that could be useful,” Yazdani told TechNewsWorld.

That could further help advance quantum computing, as the Majorana fermion can be used as a qubit, or quantum bit.

Normal qubits retain data in a state of quantum superposition, where they’re simultaneously both a one and a zero, but they lose that capability relatively easily, because they interact too freely with their environment. Majorana fermions don’t.

Yazdani’s team is not the first to have spotted Majorana. Researchers at Stanford University and Delft University last year separately claimed to have observed one.

Italian physicist Ettore Majorana hypothesized the existence of this body in 1937, but searches for it were fruitless until physicist Alexei Kitaev predicted in 2000 that under the correct conditions, a Majorana fermion would appear at each end of a superconducting wire.

In particle physics, fermions include all quarks and leptons, composite particles such as baryons, and many atoms and nuclei that have half-integer spins and obey the Pauli exclusion principle, which states that only one fermion can occupy a particular quantum state at any given time.

Only the Majorana fermion is both matter and antimatter.

Only uncharged particles can have a Majorana mass; all the elementary fermions of the Standard Model have gauge charges and therefore cannot have fundamental Majorana masses.

The Role of Superconductivity

Superconductivity enables a material to carry electricity without any resistance.

Kitaev posited that inducing some types of superconductivity would cause the formation of Majoranas, and that under certain conditions, a Majorana fermion would appear at each end of a superconducting wire.

More than one type of Majorana fermion exists. For example, some scientists posit that when an atomic nucleus decays such that two neutrons convert to two protons and two electrons — a process known as “neutrinoless double-beta decay” — the neutrinos are their own antiparticles, or Majorana particles.

The Majorana Collaboration was set up to search for neutrinoless double-beta decay.

That’s different from what Yazdani is doing, Clara Cuestra, a participant in the collaboration, told TechNewsWorld. “We’re trying to prove that neutrinos are Majorana particles.”

Yazdani’s team deposited pure iron atoms onto an ultrapure crystal of lead to create a wire one atom wide and about three atoms thick. They placed this under a scanning tunneling microscope they built and cooled everything to -272 degrees Celsius.

The two-story-tall microscope is supported by a 40-ton concrete floor that floats on air pistons. The whole setup is enclosed in an acoustic room that keeps out sound, and then in another room.

“With the microscope, we add and remove excitations from the system. The signature of Majorana is an excitation that cost zero energy, and that’s what we detected here at the edge of the wire as predicted,” he explained.

The experiment took two years. It’s easily reproduced because it uses readily available materials like iron and lead. The magnetic field is present only where needed.

Other approaches require more exotic materials, and because magnetic fields kill off superconductivity, they have required expensive and elaborate methods to stimulate the appearance of Majoranas.

Further, Yazdani’s approach is not restricted to the narrow range of conditions that apply to others.

“Using different elements, you tune the strength and property of magnetism, while chilling the sample lets superconductivity appear,” Yazdani said. His approach “has some important advantages and is simpler to fabricate for experimental tests.”