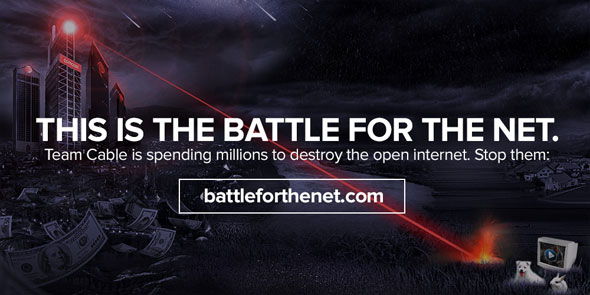 United States lawmakers were getting an estimated 1,000 calls a minute from constituents concerned about Net neutrality by noon Pacific Time on Internet Slowdown Day, an online demonstration held on Wed., Sept. 10.

Father of the Internet Tim Berners-Lee, Craig Newmark of Craigslist, Tom Morello of the band Rage Against the Machine, Creative Commons and Union Square Ventures are among the thousands who tweeted their support.

Google sent an email supporting Net neutrality to the 2 million people on its activism list, according to Demand Progress.

“Just under 10,000 websites used our official code from battleforthenet.com to run their action as part of the slowdown,” Evan Greer, campaign director of Fight for the Future, told TechNewsWorld, “but many other websites chose to participate in their own way, creating their own actions, so the actual number is probably significantly higher.”

Net neutrality advocates contend that ISPs should treat all content equally, essentially charging the same rates for access to the Internet at one speed.

They’re opposed to the United States Federal Communications Commission’s proposed rules that could allow providers to offer faster service for a premium.

ISPs, led by Comcast and Verizon, argue they should be able to charge more for prioritized traffic.

Netflix has felt compelled to pay a premium to Comcast and other service providers in order to ensure its streaming video quality, which has galled it considerably.

Common Carriage and Its Implications

Calls to regulate ISPs under Title II of the Telecommunications Act of 1934, which would treat them as common carriers, further complicate things.

Several politicians have endorsed this approach, saying it would spur competition and preserve an open Internet.

Carriers and some analysts have disagreed. The FCC’s 2002 decision to classify cable operators as “information service providers” under Title 1 of the Communications Act led to an explosion of cable broadband in the U.S., together with huge improvements in broadcast speed and quality, they’ve pointed out.

Classifying ISPs under Title II would allow the government to regulate pricing and delivery of services, and that would stifle innovation, the carriers have argued.

Those arguments do not resonate with many consumers, who have seen cable rates go up while service has deteriorated.

The Need for Money

In contrast, the lightest 50 percent of users accounted for only 7 percent of total monthly traffic.

Bandwidth guzzlers consume streaming video and audio content — the largest traffic category on the Net. In North America, Netflix accounts for 34.2 percent of downstream traffic, while YouTube is the largest guzzler of bandwidth worldwide.

“It makes sense to charge those that use more capacity more, so people can better control what they spend and more dollars are focused on building out higher network performance,” Rob Enderle, principal analyst at the Enderle Group, told TechNewsWorld.

Will the Protest Work?

The Net neutrality movement “has been very successful in making the issue accessible and meaningful to a lot of people,” Jan Dawson, chief analyst at Jackdaw Research, told TechNewsWorld.

FCC chairman Tom Wheeler “has been taken aback by the strength of the response to his initial proposals and has begun to modify his position,” Dawson continued. “I’d be very surprised if he still supported so-called fast lanes.”