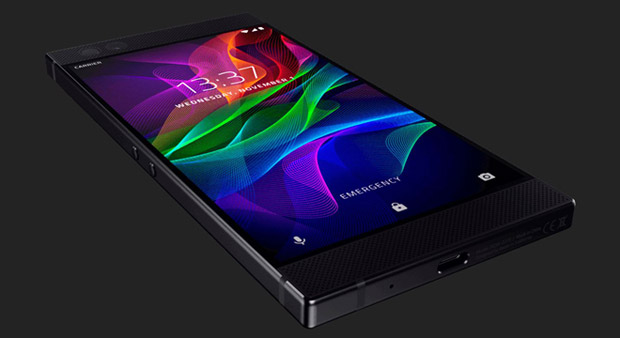 Razer on Wednesday unveiled its Razer Phone, a handset that clearly targets gamers. It boasts the world’s first 120 Hz Ultramotion display, which has the potential to deliver fast refresh rates and provide the smoothest graphics available on a mobile smartphone.

“It’s common knowledge that I’m obsessed with my smartphones. I play a ton of games on them, and they’re my go-to for streaming content,” said Razer CEO Min-Liang Tan.

“We have wanted to make a phone with gaming-level tech for years, and the Razer Phone delivers in every way we imagined,” he said.

Powered by Qualcomm’s Snapdragon 835 mobile platform, the Razer Phone features 8 GB of RAM. Its thermal design reduces throttling to maximize the handset’s power and performance. It comes loaded with Google’s Android Nougat but will support Android Oreo when the new OS comes out in the spring of next year. It also comes with Nova Launcher Prime with Google Assistant integration. It is selfie-ready, with dual rear 12-MB cameras.

As gamers are its target market, the Razer Phone further offers a 5.72-inch, Quad HD IGZO LCD display, as well as a front-firing Dolby Atmos technology-powered speaker with dual dedicated amplifiers. It has a THX-certified USB-C adapter with a 24-bit digital audio converter for use with audiophile-grade headphones.

The Razer Phone gets enough juice from its 4,000 mAh battery to last all day, while still providing crystal clear graphics and cinematic level audio, the company said. Further, it can enable Qualcomm Quick Charge 4+ for rapid charging so users can get back in the action.

The Razer Phone, which features the company’s iconic triple-headed snake logo, is now available for pre-order at a recommended retail price of US$699.99.

Razer partnered with multiple gaming companies, including Tencent and Square Enix, to develop content that will take advantage of what the hardware has to offer.

Among the announced titles for the Razer Phone are Final Fantasy XV Pocket Edition from Square Enix, Gear.Club from Eden Games, Tekken from Bandai Namco, and World of Tanks Blitz from Wargaming Group Limited.

“Razer is aiming to tap into the trend of more core game experiences on mobile and has built a product which will appeal to a small segment of gamers who like the idea of a phone with a display with a high-refresh rate, a bigger battery, and active cooling that allows it to be used for longer periods of time,” said Piers Harding-Rolls, head of games research at IHS Markit.

“However, I think the audience for a high-end gaming phone is niche — certainly when compared to other smartphones,” he told TechNewsWorld.

“The Razer Phone is a good try at optimizing a smartphone for gaming,” said Steve Blum, principal analyst at Tellus Venture Associates.

“It would have no particular appeal to nongamers, although it wouldn’t necessarily turn them off either,” he told TechNewsWorld. “It’s first and foremost a phone. Razer took a standard Android phone with a standard high-end processor, and tweaked it with a better screen and better audio processing.”

Given the size of the market — not to mention the fact that most smartphones already support many popular casual games — it’s questionable whether hardcore gamers will pay a premium for the Razer Phone.

“It’s an optimization exercise, not a new product,” explained Blum.

“It would have been really interesting if Razer had done something radical, like developing a mobile-specific graphics chip, but they’re not in that league,” he noted.

A sensible proxy for the Razer Phone’s sales potential is gaming tablets’ share of total tablet sales, a market that Razer itself has dabbled in, suggested Harding-Rolls.

“Other players in that sector include Nvidia, with its Shield tablet,” he said.

None of those gaming-specific products have sold in great numbers, and many eventually were discontinued.

“It will be interesting to see if Samsung or Huawei or another big consumer electronics company wants to go hard after the gaming sector — they’ll be watching Razer carefully,” said Blum.

In the meantime, Razer will need to pull out all stops to be successful.

“Razer is entering a highly competitive market, where deep pockets are needed and where profits are often hard to come by,” said Harding-Rolls. “Overall, I think Razer is undertaking a significant commercial challenge to make an impact with this device.”