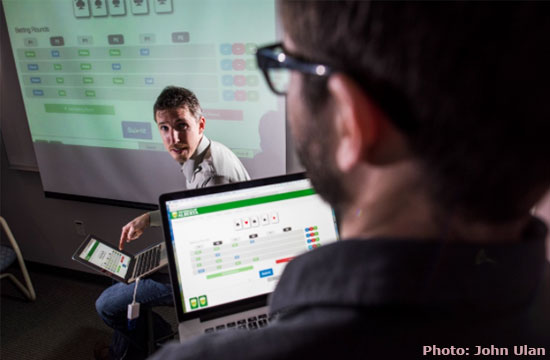 A computer program dubbed “Cepheus” has solved the game of poker, researchers at the University of Alberta announced. The Computer Poker Research Group, which created Cepheus, claims it not only can play heads-up limit Texas hold’em poker, but also beat human opponents.

Games such as poker and chess have been used as test beds by researchers developing new concepts in artificial intelligence. Past successes in this field include IBM’s Deep Blue, which defeated world champion Garry Kasparov in chess, and IBM’s Watson, which beat top-ranking Jeopardy! champions.

Poker presents special challenges to artificial intelligence researchers because the players — human or computer — don’t have full knowledge of past events and can’t see the cards held by their opponents.

Cards on the Table

The CPRG determined that any game could be solved if, over the course of a lifetime, it could be played with 95 percent confidence. To test Cepheus with poker, the computer was trained for two months while utilizing more than 4,000 CPUs, each of which considered more than 6 billions hands of poker. That amounted to more poker than has been played by the entire human race. From each hand, Cepheus was able to improve its play and refine its choices to get closer to finding the best possible solution.

Beyond Breaking the Bank

In developing Cepheus, the CPRG’s goal was not to best all human players and win the World Series of Poker. This technology is just one way to make a computer actually “think” when it comes to other imperfect information situations, including those beyond games.

“The technology could also be applied to a variety of processes or scenarios where only imperfect information is available, including deciding optimal treatments after medical diagnoses, measuring the likelihood of success of investments, and developing effective political and military strategies,” King told TechNewsWorld.

“We’re interested in seeing this research used for other problems,” said Neil Burch, a Ph.D. student at the University of Alberta and a coauthor of the study.

“One of the examples we noted is in medical diagnoses — such as how the program can be used to devise robust strategies for testing,” Burch told TechNewsWorld. “In this way, you could treat the disease as your opponent.”

“We love to see the techniques finally make it out to the real world,” he noted. “Games are where we start, and we try to push that out into the world.”

The next step for Cepheus likely will involve more hands of poker, but with a twist. Instead of the heads-up limit version of the game, the computer will have to take on the more popular no limit version.

“There is still research left to do,” Burch added. “No limit hold’em is a bigger game, and that presents an interesting problem for the computer, as we also add more players as that will add more computation problems.

Cepheus thus far has proved its prowess with cards, but what it does next will be limited by today’s computational capabilities.

“How advanced a computer do you need, just to play advanced poker? In this case, 4,000 CPUs were required to play unbeatable poker. Taking this into consideration, I don’t see much impact on gaming AI any time soon,” he told TechNewsWorld.

“Essentially, this allows the computer to learn as it goes,” Stice told TechNewsWorld.

“In this case of an unbeatable poker program, the computer would have to learn every possible move in every possible given situation, then draw on its database to know what the one possible best move it needs to make to win,” Stice noted.

“If it’s wrong and loses, then it will know not to make that move in that exact situation again,” he explained. “To do this in real-time while playing the game takes a significant amount of computational power that probably didn’t exist a decade ago. Today, programs like this are becoming possible.”