Robotic Suit Flexes Muscles on Earth and in Space

This story was originally published on Oct. 16, 2012, and is brought to you today as part of our Best of ECT News series.

NASA and IHMC (Florida Institute for Human and Machine Cognition) have jointly developed a new robotic exoskeleton, dubbed the “XI,” that could help astronauts in space stay in better physical shape, while also helping humans on Earth walk.

The 57-pound wearable device is in essence a robot that fits over a human body to either assist or inhibit movement in leg joints. For astronauts, the inhibit mode would be used in space as an exercise machine to supply resistance against leg movement and help combat muscle atrophy. 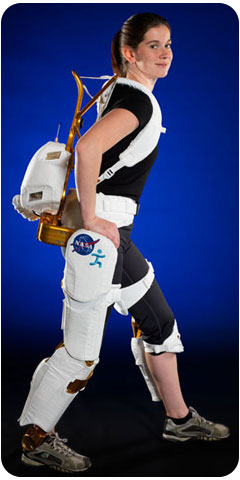 On Earth, the very same technology could be used in reverse as an assistive walking device for rehabilitation, gait modification, and even for offloading large amounts of weight from the user.

Most impressive of all, it could allow people who have suffered spinal injuries to walk again.

Astronauts in zero gravity need to exercise to keep from losing muscle mass, but exercise equipment can be large and bulky. The X1 offers a notable advantage in that it is just 57 pounds and can be worn, thus freeing up space.

“While devices like treadmills and the Advanced Resistive Exercise Device are already helping astronauts combat the negative effects of long-duration spaceflight, X1 has a few unique differences,” said Dan Huot, spokesperson for NASA at the Johnson Space Center in Houston.

“It is very lightweight and relatively small compared to current exercise devices,” he pointed out, “which would be very important on future long-duration exploration missions.”

The device has 10 degrees of freedom, or joints — and features four motorized joints at the hips and knees, as well as six passive joints that allow for additional movement including sidestepping, turning and even flexing a foot. All this could be helpful in providing exercise options for astronauts.

The X1 is designed to help astronauts battle the effects on the body resulting from long durations spent in microgravity, Huot told TechNewsWorld. “The device could potentially be used for astronaut exercise to improve crew health, as studies have shown that without proper countermeasures, astronauts undergo losses in bone density and muscle atrophy.”

NASA has noted other uses for the X1 — some that may seem long-term indeed. These include its possibility as a robotic power boost that could help astronauts work in hostile environments.

“X1 could also provide astronauts with a way to consistently exercise while having the ability to perform different tasks,” Huot added. “It could also serve future planetary explorers with a robotic power boost during any surface operations, expanding the ability of individual astronauts to complete large tasks.”

The technology could be developed with fail-safe measures built in.

“From a technological standpoint there could easily be circuits that cross-check each other, so there are redundant systems to ensure that it won’t break down,” said Derin Sherman, associate professor of physics at Cornell College. “In the long term, that isn’t as much of a problem.”

The functionality of the X1 is also notable in that it can be used as an assistance device back on Earth, where it could help those who have difficulty walking. With the X1’s unique dual functionality, it could help pave the way for more compact exoskeleton designs.

“All the potential users of exoskeletons fall into two groups,” said Jacob Rosen, Ph.D., director of the Bionics Lab in the Department of Computer Engineering at UCSC.

For the latter group, the exoskeleton becomes a walking wheelchair, Rosen told TechNewsWorld.

What makes this possible is the availability of lighter yet stronger materials to create the exoskeleton — but what remains an issue is fueling the machine.

“The biggest problem that we were looking at is very mundane, as it is the power source,” said Sherman. “It is the most mundane thing you can think of. Power seems to be the problem. In comic books you can dispense what you need from some unexplained energy source. It is all well and good to develop a suit, but how do you power it?”

Improvements in battery technology could make this less of an issue.

“This is a matter of energy density,” said Rosen. “This comes down to how much energy you can encapsulate into the device given its weight. Batteries have come a long way recently with their ability to store energy. This has allowed them to become mobile devices that are not tethered.”

Cutting the cord could allow wearers of exoskeletons to walk. The experience might not be quite like that of Iron Man, who can take flight and fight super villains, but for individuals otherwise confined to a wheelchair, it might come close.