Samsung vs. Apple: Why Samsung Wins a Pyrrhic Victory

Last week was defined largely by two interesting stories. One had Apple bringing some manufacturingback to the U.S.(some interesting thoughts on this here),and the other revolved around the outcome of the latest trialbetween Apple and Samsung.

It shows you how hard it is to read a judge, though. I thought Judge Lucy Koh would likely raise the award from US$1.05 billion, but she signaled instead that she wanted to reduceit.

Samsung and Apple appear to be in a dance to the death. Though I’m a big fan of competition, Idon’t see this battle doing anything but hurting both firms and the buyers of their technology. And let’s notforget the investors and employees of both firms — they are suffering as well. In short, I think the entireecosystem the surrounds both firms would like this to end ASAP.

I’ll go into the latest developments in this battle and close with my product of the week: Nike + Kinect training is agame parents will like because it will get them and their kids off the couch.

Apple vs. Samsung: Why It Is Ugly

Apple has every right to be upset. Samsung is executing on a strategy very similar to the one Apple used to displace Sony at the top of the TV stack. Here’s how it works: First partner, then emulate, theneffectively steal the market from the company targeted.

I was meeting with the Sony managers whenthis was happening and they were beside themselves with concern about what Samsung wasdoing to their company.

Steve Jobs was a bit more combative — and Samsung, looking at the trial disclosures, was far moreaggressive in its emulation (read copying) effort. As a result, Steve Jobs — and by proxy, all of Apple –feels deeply violated.

What Samsung did was clearly unethical to my eye was, but whether it was actually illegal has varied from country to country.

In the end, you have a company that is better backed by its government going up against an iconicU.S. company where the government can’t even balance its checkbook — let alone provide any meaningfulbackup whatsoever — and Apple is on the wrong side of that equation. These long fights in the courtsrarely work out for either company. Consider the following, for instance…

Intel and AMD fought in court for more than a decade. While AMD generally won, Intel was never crippled.

Currently both firms are facing an onslaught by ARM vendors, and it’s arguable that theirfocus on each other helped hand the tablet and smartphone markets to Nvidia and Qualcomm.

Another iconic battle was between Microsoft and Netscape, with an offended Netscape providingtestimony that Microsoft was doing really treating it badly.

Netscape even got the U.S. governmentinvolved in a massive attack on Microsoft, which was effective.

A few years later, Microsoft is underan antitrust cloud, Netscape is gone, and Google has effectively taken the place of both companies.

These are called Pyrrhic victories –that is, victories that are more costly than defeat. These kinds of “to the death” fights generally end with one vendor exiting the market and the other almost terminally crippled.

In short, the paid of the fight far exceeds the reward of the potential victory, and bothcompanies would have been far better off had they found a way to compromise without fighting to thedeath.

It comes down to resources. Over the long haul, a company backed by a powerful government is goingto survive a battle like this longer than a company — no matter how powerful — thatdoesn’t have the same backing.

I think Apple will win most of the battles — particularly thosein the U.S. — but I believe Samsung will eventually outlast it. It’s not just that Samsung is backed by the South Korean government; Samsung has a far more diverse product base, and it is far stronger than Apple everywhere but the U.S., where it is approaching Apple’s strength.

In short, in a fight to the death, the nod goes to Samsung as the eventualsurvivor — much like the cases of Microsoft and Intel. However, I expect it will survive as a crippled company, and the result will be that someother firm will be able to rise up and take its place.

LG comes to mind, because it has thepotential — should it ramp to fill Samsung’s gap — to get similar government support.

Wrapping Up: Looking Ahead

In watching the two companies, it appears clear that Samsung is able to compartmentalize this fightbetter than Apple is. I think this is likely because it isn’t personal to Samsung.

Apple should be moreinterested in settlement, though, because the odds seem to favor Samsung surviving Apple. However,quitting a fight like this is nearly impossible, because both sides tend to focus on the battle and not reallyconsider the chance that both firms are ultimately on a losing path.

Each company is powerfulenough to at least cripple the other. In the end, the firm that survives may find itself mortallywounded in a less than forgiving market.

On the positive side, this battle should do wonders for LG, Nokia, RIM and even Microsoft, particularly ifGoogle becomes collateral damage (Apple is pissed at both Samsung and Google).

So these companiesare aren’t rooting for either side to win — they just love watching the fight and hope it never ends.

Kinect is a revolutionary product. What makes it revolutionary is that the computer truly cansee you. When I say “see,” I mean both recognize who you are and make judgments about whatyou are doing.

It is so revolutionary, it is being designed into the next generation of robots to let thembetter interact with humans. 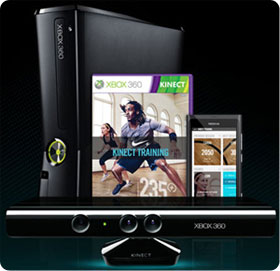 One of the obvious uses for this technology on an Xbox is for exercise,and the first implementation was with Dance Central. This game, which became a personal guiltypleasure until my niece Karen kicked my butt (don’t tell her) not only was — it got your heart rate up,and it really did burn calories.

Well,Nike + Kinect Trainingtakes this concept much farther — it focuses directly on exercise. Bymonitoring you, it can see how hard you are working and factor that into the exercise routine.

It starts bymaking an assessment, then allows you to set goals. From there, Nike + Kinect takes you to personalroutines that won’t under- or over-challenge you. In short, much like a personal trainer, it can motivateyou to work harder and better achieve your exercise goals.

It has provisions that allow you to exercisewith friends who are remote, and it maintains a benchmark on your progress — both best practices for maintaining an exercising routine.

I think this is truly the first real step in creating a true affordable virtual trainer, and because folks likeme really need to work out more, and because our lives — both quality and length — will depend on that, Nike + Kinect Training is my product of the week.