Shining Some Light on Sunspots 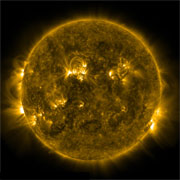 Right now, if you look at the sky at sunrise or sunset when the sun’s light is dim, you might be able to see Sunspot AR1476, which is now wending its way across the face of Sol, with your naked eye. 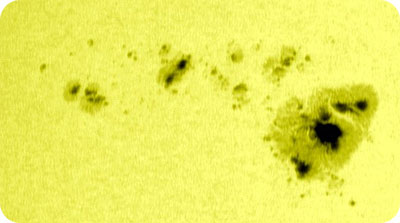 This shows the biggest and most complex sun spot visible as of May 9, according to NASA. It has produced 7 M-class flares so far but has not produced any mass ejections that could cause geomagnetic storms near Earth, the agency said.

Eyeballing the sun might hurt your eyes, of course, so it’s better to avoid looking directly at it.

At present, that’s about the only damage we can expect from Sunspot AR1476.

“There was a disturbance that hit the Earth yesterday but it didn’t look strong enough to do any harm,” Wendell Horton, a professor emeritus at the Living With a Star Program, told TechNewsWorld.

In a CME, the sun blasts a billion tons of particles into space at a speed of millions of miles per hour. A sunspot is an area on the sun’s surface that contains constantly shifting strong magnetic fields. A solar flare ejects clouds if ions, electrons and atoms into space.

When CMEs and solar flares occur together, they can cause a geomagnetic storm, solar radiation or radio blackouts. Guhathakurta said.

A geomagnetic storm could cause problems in the power grid or knock it out altogether, as has happened before if the magnetic fields of the solar particles in the storm carry with the Earth’s magnetic field, Guhathakurta pointed out.

“You must have the right orientation or nothing will happen,” Guhathakurta explained. “On March 7 and 8 we had a moderate solar storm and not much happened on Earth because the orientation of the magnetic field of this CME didn’t connect with Earth’s magnetic fields, but many of our satellites observing other planets were affected.”

Solar radiations and radio blackouts may occur, but “the effects can often be very subtle” and so aren’t readily noticed by members of the general public, Guhathakurta stated.

The sunspot currently trekking across Sol’s face has unleashed several M-class flares and a few C-class flares, the latest an M5-class flare on Wednesday morning.

Solar flares are classified as A, B, C, M or X in ascending order, according to the peak flux in watts per square meter of 100 to 800 picometer X-rays near earth. A picometer is one trillionth of a meter.