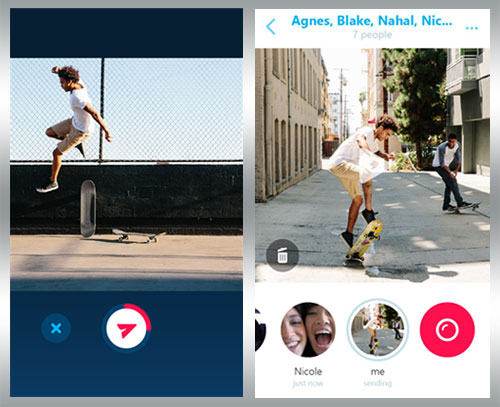 Microsoft on Tuesday released Skype Qik, a new mobile chat app that features short, self-destructing video messages that automatically self-destruct in two weeks — or sooner if set to do so.

Although associated with the Skype brand, Skype need not be installed on a mobile to use Qik (pronounced “quick”), which runs on Android, iOS and Windows phones and is available for free from the Google Play, the iTunes App Store and the Windows Phone Store.

With Skype Qik, Microsoft aims to capture some of the audience for lightweight communication apps such as SnapChat, WhatsApp and WeChat.

Skype Qik is designed to be mobile, lightweight and create an experience that is as spontaneous as messaging and as intimate as calling, Dan Chastney and Piero Sierra said in a blog post.

You can send a Qik video, which can be as long as 42 seconds, to anyone with a mobile phone number. If they have Skype Qik installed on their phone, the app will notify them when a new message arrives. If they don’t have the app, they’ll receive an SMS message alerting them of the message and containing a link for downloading Skype Qik.

If a Skype Qik contact becomes a pest, their messages can be blocked in the Windows and Android versions of the program — iOS will get that feature later.

The app allows for the creation of Qik Fliks in the Android and iOS versions of the app — Windows will get the feature later. They are 5-second GIF-style videos — sort of video emoticons — that can be used to rapidly reply to a message when you don’t have time to craft a video answer to it.

Qik Fliks is one of several features that separate Qik from other chat apps. Another is that you can jump among groups of contacts while messaging within the app. You also can mix on-the-fly videos shot with a phone’s front and back cameras.

Introducing a communication app wedded to video can be binding as well as beneficial, noted Jan Dawson, chief analyst with Jackdaw Research.

“The video focus helps it stand out a little against the plethora of other messaging apps out there, but it’s also limiting,” he told TechNewsWorld.

“There are so many settings where video doesn’t work well for either the sender or recipient, whether for privacy reasons, ambient noise or otherwise,” Dawson pointed out. “Skype and Microsoft would probably have been better served by creating a more fully fledged messaging app.”

“This seems like a ‘me too’ product,” said independent mobile device analyst Michael Morgan.

“I don’t see a clear vision for this. It doesn’t even have a clear tie-in to Skype, except for the same name and that it uses video chat,” he told TechNewsWorld.

“Microsoft is trying to make Skype more interesting because Skype has lost some of its luster,” suggested Jim McGregor, founder and principal analyst at Tirias Research.

“Microsoft is typically behind the curve of everyone else. They’re trying to get back in the game by making their product more interesting, but this is another case of being a little too late to the ballgame,” he told TechNewsWorld.

“Skype is a great application,” added McGregor, “but when you look at the capabilities of WeChat and WhatsApp, it’s really hard to go to Skype when you have one of those applications open all the time.”

Qik was originally an independent app maker. It was purchased by Skype for US$150 million in early 2011, just two months before Microsoft bought Skype for $8.5 billion. Microsoft reportedly has said that none of the original Qik code is in Skype Qik.