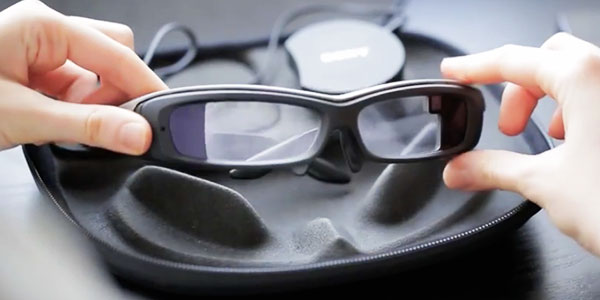 Sony on Tuesday announced that its SmartEyeglass Developer Edition SED-E1 will be available generally next month in the United States, the UK, Germany and Japan. The smart glasses — Sony’s first — also will be released in March to business customers in France, Italy, Spain, Belgium, the Netherlands and Sweden.

Sony’s SmartEyeglass, priced at US$840, resembles a regular pair of eyeglasses with a sporty black frame design. It features a transparent 8-bit display screen with 85 percent transmittance in thelenses, which allows the wearer to read emails and other notifications that can be pushed from a compatible Android 4.4 device.

Sony’s introduction of SmartEyeglass follows similar efforts to bring computerized eyewear to market — notably Google’s Glass project. Unlike Glass, Sony’s SmartEyeglass is tethered to a separate controller that can be clipped to a lapel or pocketed when not in use. The controller houses the device’s battery, speaker, microphone and touch sensors.

The SmartEyeglass weighs approx. 2.7 ounces without the controller. It features a built-in 3-megapixel camera, accelerometer, gyroscope, electronic compass and brightness sensor. It supports wireless LAN and offers Bluetooth compatibility with Android devices. The battery provides around 150 minutes of continuous use.

“There is a time and a place for smart eyeglasses,” said Josh Crandall, principal analyst at Netpop Research.

“This is particularly true in professional roles, when hands are necessary for working, and reference information is required to complete the task,” he told TechNewsWorld.

Sony may not have solved the chief problems inhibiting acceptance of the smart glass concept, however.

“Smart glasses have several issues, among them form factor — too bulkystill; social acceptance — people in the same room thinkthey’re being spied on; and applications,” noted Roger Kay, principalanalyst at Endpoint Technologies Associates.

“What can the general user do with them?” he wondered.

When not using them for specific tasks, wearing camera-enabled glasses amounts to “a social faux pas,” cautioned Crandall.

“Even if an owner isn’t using the camera, people in public will tend to move away, suspicious of what’s being recorded,” he pointed out.

“Sony would be wise to learn from the market reception of Google Glass and tailor the launch campaign from a consumer-focused gadget to a business-focused tool,” Crandall added.

Sony’s introduction of SmartEyeglass comes on the heels of last month’s announcement that Google was scaling back on commercial sales of Glass, reportedly to redesign its technology.

The absence of competition from Glass could place Sony in a good short-term position — butonly if consumers are ready to embrace the idea.

“No one has shown that there is a market for this type of eyewear peripheral,” maintained Kay.

“It’s just possible that Sony can sell them into the Japanese market, which is known for novelty-seeking and price inelasticity,” Kay suggested. “Still, that might not be enough to support such a product.”

Google has yet to unveil what it will do next with its Glass, and that could mean trouble ahead for Sony.

Even the current iteration of Google Glass is more elegant than Sony’s Smart Eyeglass, observed Kay, and though Sony’s $840 price point is lower, “you can get two computers for that amount. I’m glad I’m not the product manager of SmartEyeglass.”