Sony’s PlayStation TV Could Be a Busy Little Gadget 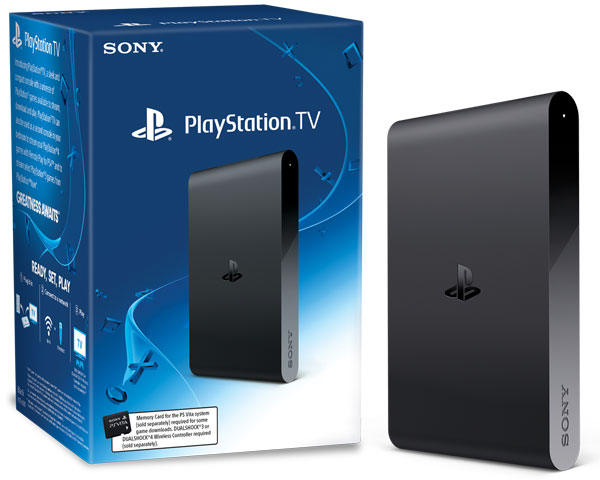 Sony Computer Entertainment on Monday confirmed that nearly 700 games will be available for its PlayStation TV system when it launches in the United States and Canada on Oct. 14. They will include popular and classic franchises such as Killzone: Mercenary, Final Fantasy, Twisted Metal and Metal Gear Solid.

Known as the “PlayStation Vita TV” or “PS Vita TV” in Japan and other Asian markets, the PS TV is actually a microconsole — a non-portable variant of the PlayStation Vita handheld device. It arrived last November in Japan and will debut next month in North America, making its way to Europe a month later.

The PlayStation TV console will be available as a standalone system for US$99.99 or as bundle with a Dualshock 3 wireless controller, 8-GB memory card, and a copy of The LEGO Movie video game for $139.99.

Sony also announced a limited edition bundle that will be available through Walmart, which will include the items in the above bundle as well as a copy of Sly Cooper: Thieves in Time, also for $139.99.

The main draw for gamers to the PS TV is that it allows for streaming of games from a PlayStation device to a second screen in another room. This creates a whole-house PlayStation ecosystem in which gamers can use PS TV to stream, download and play without needing to physically move the main console.

The PS TV is about the size of current-generation media streamers. It includes a basic set of ports including HDMI for high-definition connection to a TV; Ethernet for the streaming of content; and USB for charging of a controller or for plugging in storage devices. In addition to the Ethernet option for wired connectivity, the PS TV supports WiFi.

Gamers can use the system to play select PS Vita titles, which either can be downloaded to the PS TV or inserted directly using a PS Vita card; as well as many older PS One, PSP and PS3 games. The PS TV also will provide remote play for the current PS4 titles.

About the only drawback noted in early reviews is that the PS TV system provides a 720p video output, which isn’t on par with the 1080p resolution of the PS4. However, the resolution is still reasonable, considering that most users are likely to connect the device to smaller screens than that of the living room TV.

“For $99 with a wide selection of content, this device could be a boon for the PlayStation Plus service, as well as Sony’s aspirations to be a major content provider in the home,” video game analyst George Chronis of DFC Dossier told TechNewsWorld.

“This is the same consumer category that Android consoles such as the Ouya have been seeking to corral,” he pointed out, “but the quality and breadth of PlayStation Plus content is so much richer, there really isn’t a contest at this price point.”

While the PS TV easily can stream content, it is not without issues, observed Chronis.

“The existing Dualshock 3 controller cannot manage all of the input handled by some Vita titles, and video resolution output is a little gimped,” he said.

“Cohabitating with a PS3 or PS4 will add additional options and features — yet we do not see the PS TV as a console-dependent play. The unit has the potential to be a crossover product that can appeal to mainstream consumers if Sony targets them, but if the PS TV is advertised as a gamer add-on accessory, we doubt the product will reach its potential.”

While Sony now is touting the game functionality with its expanded ecosystem, it certainly has bigger plans for the PS TV.

“It appears as if Sony is following a very deliberate strategy forward, as Sony looks to potentially own not only the console market, but also to be a key player in the broader entertainment delivery ecosystem,” said Susan Schreiner, analyst at C4 Trends. “Based on Sony’s announcements at E3 2014, it began signaling a shift from a siloed strategy to greater cross-division collaborations between its media, movies, gaming and TV groups.

“More recently, it touted the PlayStation and its Interactive Entertainment Group as being a profitable ‘bright light’ in its challenging landscape,” Schreiner told TechNewsWorld. “The foundation has been laid with the popularity of the PlayStation, and now we’re beginning to see Sony roll out other components as it works to become the central entertainment hub in the home for a wide array of entertainment offerings, including streaming.”

At this year’s Electronic Entertainment Expo (E3), Sony hinted that the PS TV could be used in the future to deliver movies and TV content. The PS TV may just be the first step in a much bigger Sony/PlayStation ecosystem.

“Sony is in discussions with a wide range of content partners regarding TV streaming,” noted Schreiner.

“Viacom is a confirmed partner, with plans to offer MTV and Nickelodeon content. As part of this broader strategy that includes streaming of TV content and gaming, indications are that Sony is looking to target a broad array of devices that also include non-Sony TVs — and we perceive that this move opens the door to these content services being available on other more successful non-Sony devices, like phones and tablets,” she explained.

“The device is a layup for Sony,” P.J. McNealy, video game industry consultant for Digital World Research, told TechNewsWorld. “It’s a natural fit between their knowledge of how to build consumer electronics devices and how they fit into the living room.”