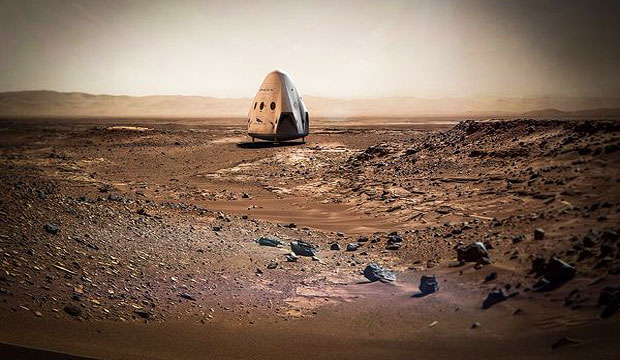 SpaceX last week announced plans to launch a mission for Mars in 2018, with help from the United States National Aeronautics and Space Administration.

The Red Dragon, a variant of the SpaceX Dragon 2 spacecraft, will make the unmanned journey. The Falcon Heavy 9 space launch vehicle will send it on its way.

The mission will gain data for NASA as part of its agreement with SpaceX.

Dragon 2 is designed to be able to land anywhere in the solar system. Red Dragon Mars mission is the first test flight.

SpaceX CEO Elon Musk is expected to disclose detailed plans for the Mars Colonial Transporter and associated architecture at the International Astronautical Conference, to be held this summer in Guadalupe, Mexico.

However, he disclosed some preliminary information last week.

The Red Dragons will use eight SuperDraco thrusters on each Dragon 2.

Tests for the Falcon 9 Heavy are next. The first launch of the Falcon Heavy is scheduled for later this year, SpaceX said.

The vehicle’s launch has been delayed repeatedly. It was initially slated for 2013. SpaceX rescheduled it for the end of 2015, but work on the rocket was deprioritized following the June explosion of a Falcon 9 carrying a Dragon cargo spacecraft, which occurred two minutes after blastoff.

The launch was moved to the April-May 2016 timeframe but then pushed back again. It now is scheduled for no earlier than November. The plan is to launch it from the Kennedy Space Center’s Launch Complex 39A, where Apollo 11 was launched in July 1969.

It is possible for SpaceX to be ready to launch by 2018, because the Falcon 9 Heavy “simply uses three Falcon first stages strapped together, and the Falcon 9 first stage is very reliable,” said Mike Jude, program manager at Stratecast/Frost & Sullivan.

“Ideally, they ought to do at least one launch to test the dynamics and total system, but they could literally use the Mars shot as the shakeout of the system,” he told TechNewsWorld.

Where NASA Comes In

SpaceX will fund the mission, but NASA will offer some technical support, such as use of the Deep Space Network for communications.

There’s an existing no-funds-exchanged collaboration between the two.

“This collaboration could provide valuable entry, descent and landing data to NASA for our journey to Mars, while providing support to American industry,” NASA spokesperson Tabatha Thompson told TechNewsWorld.

NASA plans to send humans to Mars in the 2030s.

NASA is “probably acing itself out of the manned space business,” observed Frost’s Jude.

“As the private companies develop really impressive manned space capabilities, it’s still trying to design an Apollo capsule knockoff,” he pointed out. “By the time they get it flying, Musk’s private astronauts will be collecting rocks on the surface of Mars.”

The Red Dragon can land on Mars, but it can’t lift off again because “the delta v requirements are substantial,” Jude explained. “There needs to be a Mars ascent vehicle.”

Manned missions to Mars will require living space and supplies, so “the implication is that there will need to be some sort of transfer spaceship that stays in orbit when it gets to Mars,” he observed.

Radiation is likely to be a problem, and lightweight radiation shielding will need to be developed, Jude said. There are also other, less critical problems to solve, but “in most cases the basic science is known, so solutions can be developed.”