Step Aside, Tablets – the Ultrabooks Are Coming

The industry joke on the early MacBook Airs was that even though they had decent Intel processors, they stepped down in performance in order to keep from burning up. What was kind of funny was that Lenovo, which had a similar product in market with a slower processor but running at full speed (so it was actually faster), got dinged — and Apple didn’t. However, most folks I knew who had one of these early Airs quickly tired of their slow speed and blazing hot bottoms, and moved to other products — mostly MacBook Pros.

Apple worked with Intel, and the MacBook Air improved dramatically. The current product is actually more than acceptable, and I’ve noticed that a lot of early iPad users have switched their iPads out for MacBook Airs. However, Intel is now delivering a similar product to all its other partners, and the first Ultrabooks are entering the market as I write this. Steve Jobs wasn’t pleased, largely because these Ultrabooks may be better alternatives for many than either the iPad or the MacBook Air.

I’ll share my thoughts on Ultrabooks as a strong alternative to MacBook Airs and iPads this week. I’ll close with my product of the week, the first Ultrabook I’ve had a chance to try: the Asus Zenbook UX21E-DH71.

It is funny to go back and watch this 2003 video from All Things Digital, which has Steve Jobs basically saying that tablets are for stupid people. Given that he then later came out with the iPad, it kind of builds on that PT Barnum reputation he had, connecting the dots to Barnum’s famous saying, referring to rubes: “There is sucker born every minute.” Ironically, he never actually said that, but the backstory is fascinating.

The funny thing is that most of the folks I actually see using iPads for real work are either using the wireless keyboard or the screen keyboard, suggesting that Jobs was right and that a product with a better keyboard would actually be more popular. In short, if folks weren’t overwhelmed by the wonder of a new and different product, they might be happier with a MacBook Air. In fact, many of the folks I know who started trying to use iPads for work magically seem to have MacBooks now. This suggests the iPad was more of a Trojan horse than it was an end product — at least based on this unscientific sample.

The iPad is now most often used in front of the TV or in bed where folks are consuming content but not creating content. And we already know that buyers really aren’t fans of having to carry two large devices, which is why I think many seem to have been switching to MacBook Airs instead.

In short, with two exceptions, the Ultrabook class (and the MacBook Air is in it), is a better choice than any tablet, in my opinion, and the Windows version is a great alternative to the Apple version for those who prefer Windows (we are still the silent majority, after all).

The two exceptions are battery life (at least, with the first product I’ve tested) and one-handed use. While I expect these Ultrabooks to close the battery life gap quickly — even before the end of the year given coming products — the one-handed use difference is more difficult to overcome. A tablet is just better if you are standing and doing things with it than any laptop form factor can be without a swivel touchscreen. No known Ultrabook has that (and if it did it likely would be too heavy to be an Ultrabook).

On the other hand, both in bed and on the couch, you have a surface to set the product on — and if you’ve ever tried to watch a movie on a tablet you are holding, you’ll quickly find it gets heavy after an hour or so and that the optional keyboard base is a must have. Once you add the keyboard to the iPad, the Ultrabook is a better (thinner, more integrated) alternative.

This will either make or break the Ultrabooks next year, because the new Metro interface loves touch and, right now, Ultrabooks are too light to use touch well. What happens is either the screen pushes back or the laptop tilts, and that is likely why you haven’t yet seen an Ultrabook showcasing this feature, even though it would be an ideal product to test Windows 8 on.

Apple has hinted it eventually will be bringing the iOS interface to the Mac, which is likely one of the reasons Metro is being taken from the Windows Phone to the PC next year; but both vendors will have this same problem to solve in hardware. The one that gets it right first will have a seriously interesting product that fully blends the best of tablets and laptops into a single device.

Wrapping Up: Ultrabooks, Oh My

The funny thing is that these are the first products to come to market, and like any new form factor they will go through significant improvements over the next 24 months. As they are, though, they are likely the signature products that define both the MacOS and the current Windows 7 products and provide the best cutting-edge hardware to showcase the improvements in both the software and the related hardware.

They are also the coolest of the current crop of notebooks — and given we are just getting into the holiday buying season, they couldn’t be better timed.

This is the first Ultrabook I’ve had to test, and it is one impressive product. The UX21E-DH71 version of the Zenbook sports an Intel i7 Processor, a 128 GB SSD drive, 5-plus hours of battery life, a 2.4 lbs. carry weight, a 6-oz. charger, and an 11.6-inch screen.

It costs US$1,199 before any discounts, making it very close to the MacBook Air but running Windows. It is carved from a single block of aluminum, and I think it actually is more attractive (at least looking top down given the spiral brushing) than the Air. 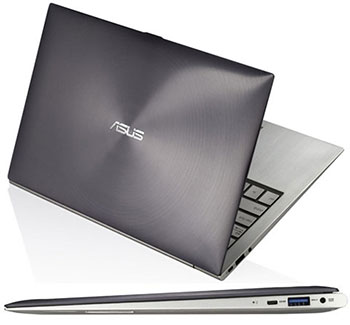 It trades out the unique Thunderbolt port for a mini-HDMI port, which, given the lack of Thunderbolt accessories, is more usable today but not as advanced. I’d actually prefer a full-sized HDMI port, but you pay a penalty for being ultra slim.

As you would expect with an i7 SSD-based notebook, this product is impressively fast for any notebook, let alone one that is ultralight and ultraslim. Will this cause MacBook Air users to flock back to Windows? No, but it is good enough to keep people from switching from Windows to Mac if it was the Air or iPad prompting that switch. Since this is the purpose of the Ultrabook class — a defensive hedge against Apple — it appears to do that job well.

It is getting me to rethink what I use as a backpack, because I’ve noticed that with this product, I can’t really tell if I have it in my bag or left it behind — suggesting I need a much lighter backpack or that it is time for some housecleaning.

Finally, this is actually part of an impressive line from Asus that pretty much matches the MacBook Air line of products, an impressive accomplishment for a Tier 1 OEM let alone a Tier 2. If I were buying this, though, I think I’d prefer the 13.3-inch version, because it adds 2 hours of battery life and a bigger keyboard.

However, I know my wife would like this purse sized 11.6-inch product much better, and that is the way a good line should be — i.e., nicely targeted. This is the coolest laptop I’ve had so far this quarter — and as a result, the Asus Zenbook is my product of the week.