Steve Ballmer last week presented an interesting plan to kill Android — or at least compete with it. What’s ironic is that Ballmer’s tenure at Microsoft wasn’t short of good ideas — it was short on execution. In contrast, Satya Nadella has shown strength in execution but (so far) hasn’t come up with anything that represents the kind of risks that Ballmer was willing to take.

It kind of makes me wonder what would happen if the two men partnered for Microsoft’s future, and it also reminds me why it’s generally a bad idea for ex-CEOs to comment on what their old firm should be doing.

I’ll share some thoughts on that and then close with my product of the week: a Microsoft Surface-like product from Lenovo that is one of the most attractive PCs ever created.

Two efforts exemplify the contrast between Steve Ballmer’s tolerance of risk and weakness at execution: Zune and the Yahoo acquisition attempt. Even though the latter was unsuccessful, it resulted in one of the biggest valuation drops in Microsoft’s history. However, Zune — Microsoft’s attempt to take out the iPod — was a good idea. It was the execution that clearly left a lot to be desired. You see, I was involved with Zune from the start, and the Microsoft team rightly analyzed where the iPod was weak.

Apple’s technology didn’t support subscription music. Nor did it support video. The hardware, while attractive, was fragile — particularly for a device that people used for outside events like running and biking. Finally, one of the big industry problems was users sharing music illegally, even on the iPod.

So the spec was to create a product that supported subscription music and video, and house it in hardware that was nearly indestructible. Subscription legally supports music sharing, and the plan even included being able to migrate iPod playlists to Zune.

Zune had all of those capabilities, but Microsoft didn’t roll out a video service. Further, it killed the effort to migrate the iPod playlist (for fear Apple would sue them). It decided to market music sharing in a way that worked only between people who owned Zunes. Finally, the initial Zune was butt ugly.

Microsoft then fixed all the problems — but killed the marketing budget for the product. Oh, and Steve Jobs argued that subscription music was stupid and his voice prevailed — that is, until Apple eventually supported it with streaming.

So, the idea for Zune actually had merit, but Microsoft’s execution ensured that it was unsuccessful. Instead of being Steve Ballmer’s greatest success, it likely turned out to be his greatest failure.

Ballmer’s current idea is to support Android apps on Windows — or basically, to steal the Android ecosystem. For those who truly understand the Android’s origins, that’s a very ironic prospect. (Even Steve Jobs likely would applaud this idea, as long as it was Microsoft and not Apple doing it).

While it was not the case with Apple, Google was pretty loose with Microsoft’s patents in the creation of Android. That means Microsoft likely could copy major components of the platform legally, and prevent Google from successfully taking action against it.

In fact, it may be possible just to copy Android and rebrand it. If Windows Phones suddenly could run most Android apps, the result potentially could be more secure than Android, while just as compatible. It would do a better job of integrating the Windows PC and phone experience than Android would, which would be an advantage.

However, this tactic would entail a lot of the same risks that were apparent with OS/2 running against Windows.

OS/2, initially developed by IBM and Microsoft, supported Windows Apps and was supposed to be the follow-on to Windows. However, Microsoft and IBM got divorced, and even though IBM even gave OS/2 away for free — it was stuffed into cereal boxes at one point — users preferred Windows, and OS/2 died in market.

The OS/2 platform had a number of critical problems. It was sold by IBM, and the firm wasn’t trusted by other PC makers. IBM was undergoing a recovery and was far weaker than it needed to be. Also, OS/2’s performance requirements were well ahead of hardware at the time, so even though it was far more robust than Windows, it was far slower. Finally, when Windows moved from 16-bit to 32-bit apps, OS/2 didn’t. It lost the app support, which Microsoft owned, and the product died.

How Ballmer’s Plan Could Work

Applying the lessons from Zune and OS/2, here’s the list of required milestones for Ballmer’s plan to succeed:

There’s a good example of how a similar strategy once worked. When Microsoft Office moved against Lotus 1-2-3, that was basically what Microsoft did. It took the Lotus scripts intact, created a better solution, and out-marketed Lotus. The end result was that Lotus’ once-dominant product failed, and Microsoft Office is still dominant.

However, that was a much younger Microsoft — one that was willing to take big risks — and its leaders were expert at the related strategy, which was called “extend, expand, extinguish.”

Wrapping Up: The New Old Microsoft

Now I doubt Microsoft will do this, but I do think it would have done it in the 1980s. Granted, it then was a very different, much more risk-taking company than it is now. As the Zune demonstrated, doing something like this half-assed could be disastrous — much like it was for IBM and OS/2.

Still, Google is even more vulnerable to an attack like this than Lotus was, and Microsoft created the strategy (embrace, extend, extinguish) that Google partially executed when pitting Android against iOS in the first place.

For Microsoft to take Google out with that same strategy would be incredibly poetic — one for the history books. I think it fascinating that a young Bill Gates and Steve Ballmer would have done it in a New York minute, but that the current Microsoft wouldn’t touch this strategy with someone else’s 10-foot pole. But holy crap, what if it did?

One of my favorite products this year is the Surface Pro 4. Microsoft went the extra yard to create a really impressive offering. Well, Lenovo has come up with an alternative that far fewer may see, but many of those who do may like it better.

The Lenovo MIIX 700 is as much a design statement as anything else. That’s due largely to the kickstand, which is based on a derivative of Lenovo’s watchband hinge. It makes it more robust, and it just looks really cool. 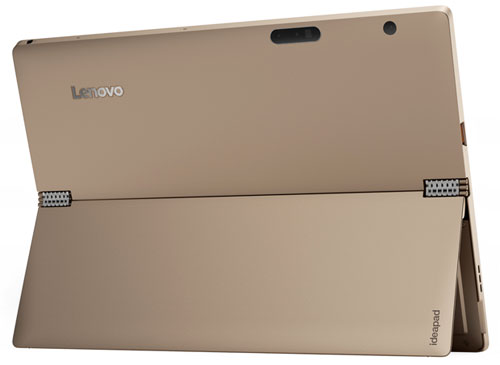 Products in this class are as much about making a personal statement as they are about what is inside the offering, and I’m a big fan of exclusivity. In other words, I personally like to have a product that stands out from the pack.

That’s one of the reasons you’ll never see me with an Apple product. Although the brand once seemed to target those who thought different, it now it is so common and generic — and the users so religious — that it feels more like a cult of pod people.

The Lenovo MIIX 700 is as much about having a piece of desktop art as it is about having a tablet/laptop convertible. It’s about making a statement that it matters what you are seen with, and that you value appearance as much as you value function.

From the back, the MIIX 700 is just amazing to look at with its sharp lines and the innovative hinge. It even has the latest addition of the Intel 3D Real Sense camera.

Every once in a while, a firm creates a product that lets you stand back and realize it is drop-dead gorgeous. The new Ford GT is like that, the Jaguar F-Type is like that, and the Lenovo MIIX 700 is like that — so it is my product of the week.