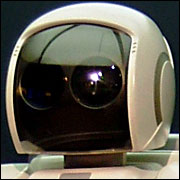 People feel uncomfortable when they see robots tortured, according to a new study from researchers at the University of Duisburg Essen in Germany. While the results may explain why some robots are popular characters in science fiction, they also have implications for robotics as more machines interact with humans in a wider range of situations. 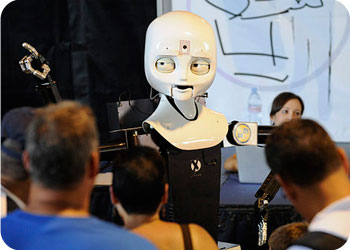 The researchers, led by Astrid Rosenthal von der Putten, showed videos of a small dinosaur-shaped robot either being treated affectionately or abused. Measuring the level of the subjects’ physical states immediately afterwards, along with asking questions about their emotional state, showed that subjects experienced more negative feelings while watching the robot being abused.

In a second study, conducted in collaboration with the Erwin L. Hahn Institute for Magnetic Resonance Imaging in Essen, the researchers looked into how people react to interactions between humans — and between humans and robots.

Long-term studies show that some people tend to form bonds with robots, while others don’t. The researchers wanted to find out whether there’s a common basis for emotional reactions towards humans and robots.

“When we know that on a neural basis people react similarly to robots and fellow humans, we might be either more careful in employing robots, or might exploit this in areas where the interactions with robots are mandatory,” such as when the robots are used in rehabilitation, Rosenthal von der Putten told TechNewsWorld.

The study “is part of the general goal of acceptance of robots on different levels,” said Philip Solis, a research director at ABI Research. It will be beneficial for most people, including those who “completely understand how every aspect of a robot works and know it is just programming.”

Robots are already being used in therapy, and the Japanese are planning to use anthropomorphic machines extensively to take over mundane chores in housing and building construction, operating industrial vehicles, personal care services, and building and home management.

The market for consumer robotics will exceed US$66 billion by 2025, according to the Japan Robot Association.

People can form strong bonds with robots. According to published reports, some U.S. troops in Iraq and Afghanistan care enough about their bomb detector robots to risk their own lives in protecting them from enemy fire.

Meanwhile, robots are increasingly saving humans from repetitive tasks. One such robot is Baxter, which its maker, Rethink Robotics, claims will revolutionize manufacturing.

The Impact of the Study

“By understanding how people see and react to robots, robots can be better designed to achieve the desired goal [they are made for],” Solis told TechNewsWorld. This “could apply to how well patients work with rehabilitation robots, and it could impact how efficiently humans work alongside robots in the workplace.”

People will work better alongside robots that can adapt their speed to the requirements of the job, change their pattern and suggest breaks. Robots could also provide feedback by making noises, he said.

Research into robots that learn from and interact with people in a lifelike, intelligent and sociable way has been under way for some time. Robots that resemble humans in terms of speech, emotion and facial cues are more easily accepted by people, Solis noted.

“Robots will eventually work with people in the operating room in a hospital, or in an automobile shop with mechanics, or eventually in the home helping with chores,” he added. “The timing for this type of research is appropriate.”