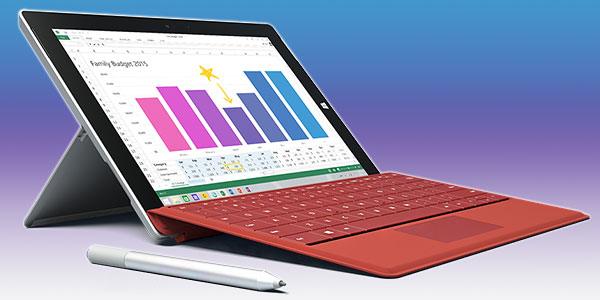 Microsoft on Tuesday raised the curtain on its new Surface 3 tablet, targeting users who want a robust Windows tablet at an iPad price.

Up to now, those looking for a full-featured Windows tablet had to spend US$799 for a Surface Pro 3, but some customers will find their needs can be met with the new $499 Surface 3.

“It allows Microsoft to continue to market and promote all of the innovations of the Surface Pro 3 and have a go-to product for those who aspire to get a Pro model, but it’s not in their budget,” he told TechNewsWorld.

“They’re giving a pricing and feature alternative to people who like the notion of a two-in-one computer and who got sticker shock at the Surface Pro’s $799 initial price without a keyboard,” added Patrick Moorhead, founder and principal analyst with Moor Insights and Strategy.

The Surface Pro is a premium device with lots of bells and whistles, he noted.

“The Surface 3 has fewer bells and whistles,” Moorhead told TechNewsWorld, “but Microsoft made some pretty good tradeoffs.”

Like its Pro brother, Surface 3 has an Intel processor — the quad core Atom x7 — which allows it to run 64-bit Windows 8.1, not the RT version found on its predecessor, the Surface 2. Moreover, the tablet can be upgraded to Windows 10 for free when it’s released later this year.

“It really benefits from Intel’s Atom x7 processor, which delivers the best combination of performance and energy efficiency Intel has achieved in the Atom line,” said Charles King, principal analyst at Pund-IT.

“It’s the best and most compelling Microsoft Surface product that’s ever hit the market,” he told TechNewsWorld.

In addition to being able to run all programs that run on Windows, the Surface 3 supports input from a stylus. Although acquiring a Surface Pen — offered in silver, blue, red and black — requires another outlay of cash, Microsoft is including two free programs that make good use of pen input: Drawboard PDF, which allows PDFs to be marked up with margin notes and such; and StaffPad, which permits music composition on the tablet.

Wireless connection via LTE is another Surface 3 option.

The Surface 3’s display is smaller that of the Pro — 10.8 inches versus 12 inches — although it has the same 3:2 viewing ratio.

The unit is relatively light at 1.37 pounds, but a tad thick — 8.7 millimeters — compared to consumer tablets in the market.

Microsoft rates the battery life of the new tablet at 10 hours. Charging can be performed via a mini USB port — the same kind of port many smartphones use for charging.

The device also has a full-size USB 3.0 port, mini display port and microSD card reader, as well as a front-facing 3.5 megapixel camera and an 8-MP rear-facing one. Both cameras can shoot 1080p video.

Also packaged with Surface 3 is a free one-year subscription to Microsoft Office 365 Personal, along with access for one year to one terabyte of space on OneDrive, Microsoft’s cloud storage service.

Microsoft has been marketing its tablets as alternatives to laptop computers. That message appears to be resonating with a different audience than the one most consumer tablets attract.

“Surface customers are very different in some ways,” said Rhoda Alexander, director of tablets and monitors at IHS Technology.

“You’re looking at a customer very comfortable with the Windows system,” she told TechNewsWorld. “They’re focused on a blend of consumption activity and creation activity, with an emphasis on working in traditional Windows applications.”

“It’s an overlap of consumers who want a tablet for personal uses but also have a business purpose in mind,” he told TechNewsWorld. “It’s less a business organization-based purchase or procurement, and more something small-office/home-office type of people would purchase.”

As for Microsoft’s claim that the Surface can replace a laptop, that may not be entirely true, even for tablet enthusiasts.