Tech-Hungry ‘Crazy Ants’? Not So Fast 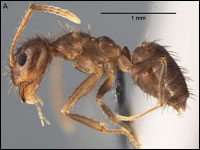 To read some reports in the tech press lately, one might think there’s an electronics-hungry menace from South America on a march of conquest through the Southeastern United States and Texas, leaving a trail of destroyed smartphones and other precious devices in its wake.

It’s known as the “crazy ant,” and recent reports of its arrival derive from an article published in April by a team of University of Texas at Austin researchers in the journal Biological Invasions.

Known to scientists as Nylanderia fulva, the crazy ant drives out other types of ant, including the notoriously troublesome red imported fire ant. It’s also difficult to kill with pesticides because the ants don’t typically consume them.

Crazy ants did cause nearly US$150 million in damage to electrical equipment in Texas in one year, according to one ABC News report.

They do not, however, eat electronics.

No Cause for Panic

Indeed, “there has been some exaggeration of the dangers,” University of Texas spokesperson Daniel Oppenheimer told TechNewsWorld.

“We’re not sure how it got into the news … that the ants go after phones and computers,” Oppenheimer added. “That certainly didn’t come from our researcher.”

Commonly known as the Raspberry crazy ant or tawny crazy ant, the insects are a part of theParatrechina family, whose members are called “crazy” because they move in random, nonlinear fashion.

Though some reports claim they eat everything from iPods to cattle, in reality the ants feed on small insects and vertebrates and forage on plants for sweet materials such as their sap.

Crazy ants don’t sting the way fire ants do, so it’s not likely that their diet would include large animals. As for electronics, it’s true crazy ants sometimes infest it, but they definitely don’t eat it.

In fact, several varieties of ants are unaccountably attracted to electrical equipment. That can sometimes lead to trouble because, when they’re killed by touching live electrical equipment, their bodies release pheromones that attract their nest-mates, and the resulting crush overwhelms the circuits.

Still, the problem is far from universal, even in the areas said to be hardest-hit.

Texas-based Stream Data Centers, which specializes in developing data centers for corporate users, “has not dealt with any ant issues in their data centers,” company spokesperson Jessica Nunez told TechNewsWorld.

There’s no doubt crazy ants are troublesome, particularly because of their tendency to drive out or reduce the numbers of other forms of ant life. The most striking effect of their invasion is that they displace the fire ant — a change that could affect Texas’s biodiversity and ecosystems, which have evolved to accommodate fire ants.Still, “some success [in controlling tawny crazy ants] has been seen using insecticidal baits combined with insecticidal spray,” Neil Tsutsui, an associate professor at the University of California at Berkeley who studies ants, told TechNewsWorld.

Businesses and home owners can remove potential nesting sites such as leaf litter and fallen wood from around structures as a preventive measure, Tsutsui said. Further, since tawny crazy ants prefer moist habitats, reducing irrigation and getting rid of standing water will help.

Tawny crazy ants were first sighted in Texas back in 2002, and their spread has been relatively slow to date. With care, their spread may be slowed by years or decades, the University of Texas researchers note, thus giving scientists time to develop better control methods.