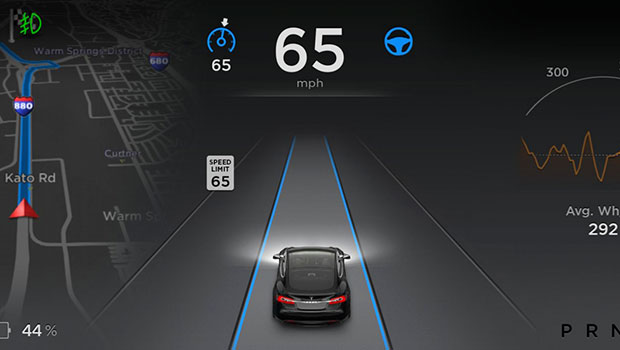 The system is not designed to do the driving just yet, but it could help relieve drivers in the most tedious and thus potentially dangerous aspects of road travel.

The autopilot system is available in Tesla Model S vehicles. The hardware included in those models since last year allows for the gradual introduction of self-driving technology, including forward radar, a forward-looking camera, 12 long-range ultrasonic sensors situated to sense 16 feet around the vehicle in all directions at all speeds, and a high-precision, digitally controlled electric-assist braking system, according to Tesla.

The autopilot technology can search for parking spaces and aid in parallel parking. On the road, it can help the driver change lanes when activated by a simple tap on the turn signal.

This could be a significant leap forward from the semiautonomous systems used in vehicles by Audi, Mercedes-Benz and Volvo. Those systems can maintain a vehicle’s position in the lane as well as its distance behind another automobile.

Tesla did not respond to our request for further information.

Tesla’s system relies on four feedback modules — camera, radar, ultrasonics and GPS — that tie into a network that provides real-time data feedback to help the fleet of Tesla vehicles learn and improve.

This technology is a step toward greater automation but isn’t a driverless vehicle. Drivers will still need to maintain control.

Level 1 — or function-specific automation — involves one or more specific control functions, such as electronic stability and precharged brakes, that allow the vehicle to automatically assist the driver to regain control or stop faster than would be possible by acting alone, according to the National Highway Traffic Safety Administration.

Tesla’s system builds on this, but doesn’t take the vehicle to Level 2, combined function automation.

“The most notable feature is the lane change, something other automakers don’t have right now,” Brinley told TechNewsWorld.

The technology is designed to handle real-world road conditions and is thus a valid step toward an autonomous vehicle, but Tesla isn’t alone in developing this technology.

Tesla CEO Elon Musk has been a big proponent of autonomous vehicles and suggested that one day it might be “illegal to drive a car,” added McGregor.

The fact that cars could do the driving in the future might make the roads safer, but that would require more of those cars on the road.

“There are only 60,000 Model S vehicles that are equipped with this system, and that’s worldwide,” said IHS Automotive’s Brinley.

“It certainly has the potential to be safer as it can read for blind spots better than a human driver, but by itself it won’t cause a massive decrease in accidents,” she added.

What could slow development is fear of what would happen when something does go wrong.

“It will take time because of the safety concerns,” said McGregor.

“They need to be even safer and see more than a human can,” he added. “No one in the industry wants to be the first to deal with a lawsuit due to an autonomous vehicle killing someone. Eventually they will be a reality, and they will significantly increase the safety of everyone.”

Tesla’s latest technology may not seem significant, but that’s part of the point. As with any major technology, it will arrive via small advances, so don’t look for a self-driving car to take the roads all of a sudden.

“All of these things — including driver assist — are building on themselves, and it is incremental,” suggested Brinley.

“Evolutionary steps are necessary because it isn’t just the technology advances that will get us to the driverless car,” she said. “If you suddenly flipped the switch, it would be a more difficult transition for the driver, so it needs to come in stages like this.”