The Best Windows 8 Laptop in the Market: The MacBook Pro Retina Edition

When testing a new operating system from Microsoft, finding the right hardware is often the biggest problem. Many of the negative reviews of Windows 8, including my own, are tied to the hardware that just wasn’t designed for it.

I was at Microsoft’s TechEd last week, and after hearing presenters drill down in detail on the specs for what an ideal Windows 8 laptop should be, I experiences an aha moment. It came with the announcement of the new MacBook Pro Retina, which fit the specs for a non-touch Windows 8 laptop almost perfectly. The “almost” part is it doesn’t ship with Windows — but it is closer than any other laptop in the market.

Most of the existing laptops in the market suck with Windows 8, with or without touchscreens. This is because Windows 8 really pushes three things: It pushes touch (of course), it pushes graphics performance, and it pushes resolution.

Most existing laptops don’t even have multitouch-touchpads on them, and those that do often make them too small or put a border around them so you can’t use the edges effectively. Windows 8 uses the edges and corners to bring up critical menus and aggressively uses gestures, so you need a large, multitouch touchpad that is set flush into the wrist rest. Otherwise, you’ll just get annoyed and frustrated when things don’t work right.

As a side note, this problem is particularly true of touchscreens. You need one very close in performance to the iPad and other top phones that use gestures heavily. Most Windows Tablet solutions were built to hit a price point and simply aren’t sensitive enough to work reliably. (I’ll get to this more in the product of the week section — this is a teaser.)

Windows 8 is the first version of Windows truly designed to scale with the screen size and resolution. It should be as accurate on a 10-inch display as it is on a 200-inch display — assuming we could find and afford one — and anticipates both great size and great resolutions.

This means, unlike what used to happen with Windows on high-resolution displays in the past — bad or tiny fonts and images — this version will get better the higher the resolution, so the greater, the better.

I looked at all of the laptops in the market, and when the display requirement is added in, only the new MacBook Pro with Retina Display checks all of the boxes.

What really drove this home was that one of the Microsoft executives briefing me last week was running Windows on a MacBook Pro on top of Boot Camp, and he loved it. Think about it: The MacBook Pro has a large multitouch touchpad that is mounted flush to the wrist rest; that’s one check. It has an Nvidia GeForce GT 650 GPU based on Nvidia’s new top-of-the-line Kepler technology; that’s another check. Finally, it has — and this is what makes it truly stand out — a Retina Display that is the highest-resolution display on a notebook in its class; that’s the third check.

Now, you do have to run the new OS on Boot Camp, so you’ll likely take a bit of a performance hit if you were to go this route, but the MacBook Pro Retina, on spec, likely represents the gold standard for a non-touchscreen notebook computer.

Wrapping Up: What Does This Mean?

It means that Apple and Microsoft are largely on the same page when it comes to the hardware that people want. Microsoft is being more aggressive with regard to UI design, but you could argue that this is because it didn’t make the big change Apple did a decade ago.

Neither company likes to make big changes. But faced with what has become an iPad tsunami, Microsoft figured out it had a better step up, and Windows 8 is the result. In the end, although both firms clearly aren’t in agreement on software, on hardware — at least laptop hardware — they are in lockstep.

This suggests that come the Windows 8 launch, we are likely to be up to our ears in products that look like and have a similar spec sheet to the MacBook Pro Retina edition. Hey — if you have to look like something, this attractive product is an excellent choice. You know, I’m warming to Tim Cook. He is no Steve Jobs, but so far, he’s doing OK, and he sure as hell is a lot nicer.

The Samsung Series 7 Slate (700T1A) was the showcase product at TechEd, and it really drove home why current Windows tablets suck and showcased the limitations Microsoft is targeting with the iPad.

Currently, this tablet sells with Windows 7, and at around US$1,400, it prices out similar to two well-equipped iPads. Generally, the reason many of the existing Windows tablets suck is the OEMs tried to shave off costs and then ended up with expensive crap.

While the iPad is around 10 inches, this Samsung approaches 12 inches, and size does make a huge difference if you want to use a tablet to create rather than just consume. You’ll quickly find, like you probably did when you bought a larger monitor, that two inches can make a huge difference (that’s what SHE said).

Most of the existing tablets were built on the iPad spec and focused on consumption, but Windows’ strength is that it is a full-featured OS and can do creation just fine. 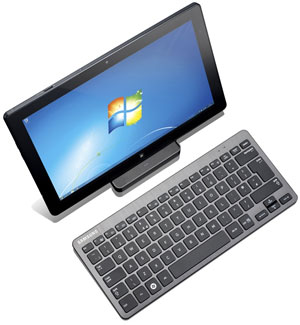 You see, most of the complaints about the iPad seem to come from folks who want it to be a laptop so they can more easily leave their laptop at home, but the iPad actually has less performance than a netbook, and we know how netbooks ended up.

The iPad wins where the netbook doesn’t because it doesn’t officially try to be a notebook and fall short — it tries to be an entertainment device and does that fine.

A lot of people want more, though. In fact, I heard from three large company IT managers who raved about this tablet running Windows 8 and plan to deploy it instead of iPad or Google tablets because their users want to work, not just play. (Actually, that may not be entirely true, it is likely the folks these people work for that are driving that requirement).

With a wireless keyboard, this thing kicks the iPad’s butt on productivity — given the price difference, it’s better, huh? — and with the right keyboard, this will easily replace both an iPad and a notebook computer, especially after the Windows 8 app store finally exits beta.

At 1.87 pounds, this tablet is one of the lightest Windows tablets in the market. The lightest Ultrabook I’ve tested weighed around 2.5 pounds, and the current iPad is only .43 pounds lighter at 1.44 pounds. That is less than a half pound more than the iPad for full notebook capability. Pretty impressive.

It has a high-performance capacitive screen that provides cellphone-like gesture capability and a reasonably high 400 nit display (most laptops are 350, but I’d prefer 500 or more) with a 1,366 by 768 resolution, which is still way lower than the Apple Retina Display.

It has full port out — USB, HDMI, Micro SD — and it is one of the first products to sport WiDi (HD video streaming to TV technology). It has a 128 GB SD drive, and it supports a stylus you can use to draw or sign things. It even ships with an attractive wireless keyboard (.65 pounds) for that full laptop experience while writing.

The only thing I didn’t like was it uses Intel’s HD graphics, which significantly underperforms the Nvidia GPU used in the MacBook Pro. Some sacrifices were made for the tablet form factor and weight limit, but otherwise, this is an amazing look into what Windows 8 tablets will have at the end of the year. As a result, the Samsung Series 7 Slate (700T1A) is my product of the week.