Last week, we looked back at the largely untold (or under told) stories of 2014. This week, let’s look ahead to some of the stories that are coming in 2015.

I’ll close with my product of the year, which even surprised me.

In 2015, we will begin to talk about the implementation of a number of technologies we saw previewed in 2014 and that will be introduced at CES next week. One of the biggest is resonance charging, which allows you to put a device in the vicinity of a charger and have it charge wirelessly. This will show up first for cellphones and tablets, and then later for laptops.

Mu-MIMO, which was announced this year, provides networking performance in line with gigabit switches. We’ll move to 10 gigabit products in 2015, showcasing how incredibly fast this technology is advancing.

We’ll also move to shared WiFi hotspots more aggressively, so you can automatically connect to a WiFi network in a house or business that is part of the same network you already subscribe to. Oh, and while 4G has been talked up a lot this year, next year we’ll start hearing more and more about 5G. Just as 4G made 3G look like crap, 5G will do the same to 4G. 5G is going to make a mess of WiFi and Bluetooth as well, because we are the tech market, and we like to mess with your heads.

Another Nail in Passwords’ Coffin

We’ll see biometrics move much more broadly. Already in a number of phones (mostly Apple), it will move aggressively into tablets and PCs. We should see a shift from fingerprint scanners to facial recognition as the way to get into our accounts.

As I noted last week, I don’t think the Sony saga is over. Once someone is successfully blackmailed, the blackmailer is encouraged to come back, and it is likely other studios, government organizations and businesses now will be targeted to blackmail them into behavior that favors Korea or any country or group that copies its behavior.

Sony just showcased the extreme and powerful benefits to doing this and now this behavior will likely spread like wildfire. I expect the escalation will result in the release of emails and other internal documents that highlight just how badly some folks in power behave.

I also expect a lot of executives will be virtually unemployable when all the dust settles. There is even a possibility that the damage to the Sony brand will be unrecoverable, because its behavior likely will be showcased as the cause for the resulting mess. This is another reason Sony likely should have separated the content business from the rest of the company some time ago.

A lot of the coverage of the scandal surrounding the failure of the Apple supplier to create the screens for the iPhone 6 seemed to revolve around implications the company was incompetent. In 2015, we’ll likely better understand why sapphire just doesn’t work as well as hardened glass.

Phones flex, but crystal doesn’t, making it totally unacceptable for phones. However, we will see this battle recur over and over again in the coming year.

Robots are advancing at an amazing/alarming rate. From robots used to drive cars to robots for manufacturing lines to robots flying armed aircraft, we will see a lot of amazing stories in 2015. Amazon replaced a large number of full time workers with robots in 2014, and it and other firms likely will accelerate this in 2015. I think we’ll be surprised at how capable these machines will become and just what jobs are at risk.

On the other hand, we’ll likely see far safer workplaces, safer roads, and safer skies as a result of this — at least initially — until Skynet goes live and they take over the world.

While Google has effectively killed Google Glass, due to really bad husbanding, it did effectively launch this class of hardware. There is now a massive amount of pressure to put cameras on police officers, and because head-mounted devices see what the officer sees, they likely will emerge as far better for both the officer and the citizen than those mounted on a shirt or car.

There have been huge successes in trials for doctors, technicians, assembly workers, and other professions in which it’s beneficial to share what is being done with remote folks who can help, as well as see manuals while keeping hands free.

We’ve been rolling analytics platforms into the market and into companies and government agencies aggressively in 2014. Most of this stuff hasn’t properly vetted the data going in. Nor have the efforts ensured that the executives who need the answers know how to use these systems.

I think that is going to result in stories about the massive amount of waste and bad decisions that resulted from these systems being implemented improperly and incompletely.

This product has been far better than anything I’ve seen from Microsoft in years in terms of addressing the problems that kept people from buying or appreciating Windows 8. It works far more like Windows 7 and Windows XP did, but better. Though it still works better than those products did with touch, it doesn’t require it.

I think we’ll be surprised how popular this platform will be, especially in business, which seems to have a love affair with it. This could be the closest thing Microsoft has to a Windows 95 moment since, well, Windows 95.

Google in the Headlines

Google, for good or bad, increasingly will be a news magnet. It is the company most of us are afraid of when it comes to someone developing a hostile AI. It is being forced out of some European countries, and the EU is talking about breaking it up.

This year, it brought out products (Google Glass) that got users beat up, and it doesn’t seem to be learning from any of this. So I expect Google will be in the news a lot in 2015.

From consumer services like Nextdoor (which currently is doing a good job of protecting people from package theft) to business services like Ombud (which connects purchasing agents to make sure vendors aren’t taking advantage of them), this idea of creating a specific social network designed to focus on a clearly defined need is proving to be very valuable.

I’ve been suggesting that the magic Steve Jobs created at Apple could be recreated with a charismatic executive who has a love for products. Lenovo is the only company giving this theory a shot, and the only firm that has been able to get the idea of a celebrity executive partnership to work.

Kutcher is personally husbanding Lenovo’s next generation of tablets to market, and they are stunning. Lenovo’s Yoga offerings already represent some of the best in their product class — but to break out, you need magic and Kutcher apparently plans to bring it.

This should all come together next week, and we’ll then know whether you really can recreate some of the old Steve Jobs Apple magic at another company.

I should point out that the only reason this seems to be working is that Kutcher studied to be an engineer (so he talks the language), does have a passion for hardware (isn’t just a paid shill), and has a chip on his shoulder because he was criticized for playing Steve Jobs in the movie so he has something to prove.

All of this will work into the stories of 2015. By the way, this is the Yoga version he had the biggest impact on.

Speaking of Apple, the wearable space still doesn’t have a defined reason for being, and products are all over the map. The only vendor that has demonstrated it can pull the market together on an idea in recent years is Apple, and the Apple Watch should at least drive some focus into the market.

In addition, this will be the true test of Tim Cook, because this will be the first high-profile new segment product that will be launched under his leadership. Regardless, it undoubtedly will pull a lot of interest.

We’ll start to move to the 2016 elections, and the level of technology that will be available to those running has massively advanced over the last two years. The Obama campaigns showcased the advantages of getting this right.

In addition, we’ll likely have several ex-tech Tech CEOs either running or involved in key campaigns.

The tech behind the primaries (there will be no presidential incumbent running) should provide an interesting set of new reasons for those both winning and losing.

Wrapping Up: Oh My

2015 will be an amazing year, and the amount of turmoil we will see likely will make 2014 look tame by comparison. Scandals, robots, elections, and the emergence of a variety of new technologies should define this space.

2016 will showcase big risks for solar and Tesla — if, as I expect, most of the electric subsidies are repealed — and some interesting drama over U.S. healthcare if the Affordable Health Care Act is repealed (which still looks likely).

So, as crazy as 2015 will be, 2016 is likely to be even crazier. Fortunately, I’m kind of into crazy, making this a decade I may enjoy too much.

Product of the year: eFun Nextbook

I went back over all of the products I covered this last year — from the Microsoft Surface Pro 3, which really redefined what you could do with a tablet, to the Chilipad, which helps save my marriage every night, and the FLIR infrared camera that saved me a ton of money locating a problem with my plumbing. I even thought about the iPhone 6+ as a segment changer. However, I think a hybrid Windows 8 notebook that costs under US$180 is a true game changer, so the eFun Nextbook stood out. 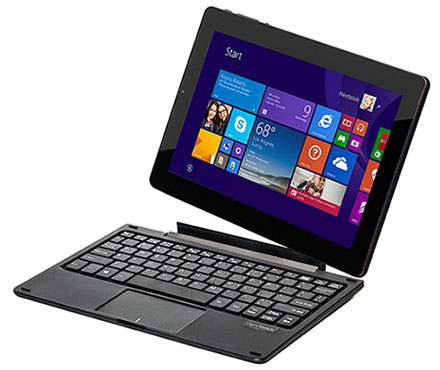 Typically, products in this class that run full Windows 8, not Windows RT, hit price points above $750 — and often are nearly twice that. This is at a price point below where netbooks played and Chromebooks play, and both of those products are crippled — at least when compared to a fully featured product. The Nextbook even has an impressive seven hours of battery life and four processor cores.

I think this is going to break open products in this price range and both fuel a stronger response by Microsoft against the Google Chromebook and put a massive amount of pressure on the PC segment to reduce prices to never-seen-before lows.

So, because of its potential to be disruptive, the eFun Nextbook, which is on sale in Walmart for under $180 this holiday season, is my product of the year. eFun plans to have even more disruptive products in market next year, and I doubt it will be alone.