The Rise of Drone Racing, Part 1 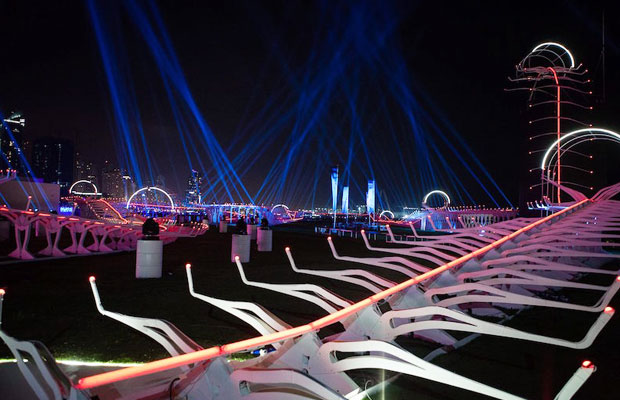 Tearing through open spaces and timing each turn to burst out of them, a seeming continuum of drones weaves through a set of obstacles lap after lap, until the stutter of a pilot’s joystick breaks the cadence of this competitive concert and destroys the illusion.

It’s the drama — anticipating and reacting to those human moments — that has propelled drone racing from an underground scene in Australia four or five years ago to vying for a place in the sports mainstream today.

Drone racing is more than a group of pilots pushing their cinematographic drones from point A to B. It’s that simple at its core — and from a distance — but the sport of drone racing is deeper and much more difficult.

With its gymkhana-like courses drawing an increasing amount of attention in recent years, drone racing is getting its shot at popularity.

The International Drone Racing Association inked a landmark deal with ESPN last month, and the sport has been enjoying a marked uptick in high-level cups, with payouts to winners regularly amounting to hundreds of thousands of dollars.

Racing drones are different from their cinematic counterparts, which have cameras on their bellies and automatic stabilizers. Competition drones have manual controls and front-mounted cameras, positioned to give pilots the optimal view for weaving through courses at speeds of up to 80 mph.

Marrying human and machine in drone racing are first-person-view headsets, which are linked remotely to the pilot’s drone. It’s a view that invokes in pilots the feeling of flying.

Unhindered by automatic stabilizers, racing drones are much more nimble and, in turn, are exponentially more difficult to fly than the common consumer quadcopter.

It’s the rewarding rush of the races, along with the demand for dexterity and the social scene that attracted Mackenna “McFly” McClure to the sport.

“I raced motorcycles for a bit but the chances of getting hurt started to wear on me, and I moved away from it for a couple years,” he told TechNewsWorld.

So McClure took up drone racing last year and now ranks in the top 25 of more than 270 ranked IDRA pilots.

Drone racing is “the only thing that I have found that gives you that same rush doing 70 to 90 mph a few feet off the ground, but if you crash you just pull the goggles off and go pick up the pieces,” McClure said.

“The most rewarding out of all is all the incredible people I have met along the way in the last year,” he added.

Some drone-racing hurdles are as brightly lit as the neon rings Drone Racing League pilots push their quadcopters through.

Other hurdles are more subtle, like IDRA’s off-road style course. However, the hurdles to drone racing apply to all participants equally.

One of the biggest challenges for the sport has been attracting spectators. Watching the pilot’s feed can provoke a sense of motion sickness, because spectators have to keep up with the action instead of controlling it.

Also, pilots currently rely on analog signals patched into their drones’ cameras. That view can be grainy and pilots sometimes have to contend with a “break up in the video while racing,” according to McClure.

“Spectators want and need to have a great view for them to be interested in watching. Otherwise, you kinda get turned off by the view unless you’re the one actually flying the drone,” said McClure. “The videos you see online are all captured through HD cameras, and that’s not the video we see while flying yet!”

There’s also the issue of the visual impact the drones make on spectators, remarked Charles King, principal analyst at Pund-IT.

Other than military-class drones, most of them are “just too small to make much of a visual impression,” he pointed out.

“So you could describe the sport today as being akin to what radio-controlled model cars are to NASCAR,” King told TechNewsWorld. “Racing larger drones would be more exciting visually and also offer onboard real estate for sponsor logos but would likely increase risks for live race audience members.”

Despite putting together a recipe of rules and regulations that have piqued the interest of venture capitalists, marketers and a major broadcaster, drone racing will have to tinker with its ingredients to hold the foothold it has established.

Leagues have to strike the perfect balance between challenging competitors and making it fun to watch, noted Rob Enderle, principal analyst at the Enderle Group.

Robot combat has struggled to sustain support on a national level, despite its being made “fun to compete in,” he pointed out.

“I expect we’ll eventually end up with something more like roller derby was than a more typical race where you have teams of very different drones with very different skills providing a wide variety of action,” Enderle told TechNewsWorld. “You could actually use Quidditch as a model for a very different kind of competition, which is what I expect robot fighting to evolve into: goals and contact.”

“With drones and robots you don’t need any of this, and once the architects of the competitions realize these constraints no longer apply — but still treat the drones and their operators as stars — we’ll see a far more interesting and sustainable set of sports emerge,” he said.

Despite the gauntlet of challenges, drone racing has a relatively low barrier to entry, which makes it fertile ground for grassroots efforts. Those efforts, which already have put the sport on the precipice of the mainstream, could inspire second or third attempts if this first effort should fail.

The relatively low barrier to entry is one of the most intriguing things about the sport, noted Patrick Moorhead, principal analyst at Moor Insights & Strategy.

“You can have drone racing in a parking lot and don’t need millions of dollars like car racing,” he told TechNewsWorld. “Also, it leverages a video-game like approach to UI, which has shown to be very, very popular with e-sports.”

Those interested in getting into the sport should start with an inexpensive kit and work from there, advised drone pilot McClure.

“Crashing is absolutely going to happen. We all crash, and it’s part of the sport,” he said.

Most importantly, pilots of all skill levels need to be smart and know their surroundings before flying, McClure emphasized. It’s important to find a place away from people, and if any should turn up, either move or wait for them to pass.

“The only way to have the sport and hobby show in a good light is to be as safe and responsible as possible,” he said, “and most of all — have fun!”

The Rise of Drone Racing, Part 2