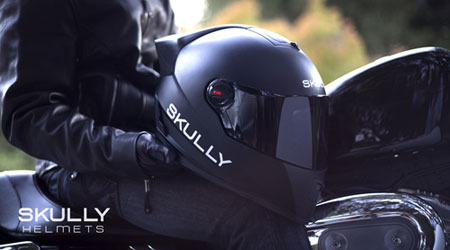 When you're more aware of what is around you, when you can listen to your tunes and use GPS so you don't get lost and can stay in touch more easily, your stress level goes down. Without this stuff, you're trying to ride while you juggle a phone or GPS system, worry about what you're missing when your phone vibrates on your waist, and could get surprised by something coming up fast behind you.

Skully had its coming-out party last week, and while the name unfortunately sounds like the nickname for any number of comic book villains — from Skeletor to the Red Skull — it is actually a firm that makes a pretty incredible high-technology motorcycle helmet, with technology similar to Google Glass.

Motorcycles have lagged cars in technology for some time, but because it is often cheaper to implement things like electric motors in bikes, and because the need is actually higher, I think Skully’s AR-1 represents the first big step in making motorcycle riding both safer and more fun. Those are two words you typically don’t see together when talking about any motorsport.

I’ll close with my product of the week: a new supertablet from Nvidia called the “Shield.”

The Skully helmet is actually a pretty impressive piece of equipment. It allows motorcycle riders to interact with technology while keeping their hands on the handlebars and eyes on the road. With the proliferation of smartphones and the lack of adequate enforcement of smartphone laws in cars, there are far too many car drivers who aren’t watching what they are doing.

Two drivers engrossed in their phone conversations recently almost hit me — and I was driving a big black FX35 crossover. They just changed lanes as if I weren’t even there. In a truck, I’d survive if I weren’t paying attention. On a bike, I’d be dead.

Still, bike riders want to listen to their tunes and get calls while they’re driving, and they have to use GPS systems as much as the rest of us. If they get distracted, though, and aren’t aggressively watching out for idiots paying more attention to their phones while driving then on what’s around them, there is a good chance they either won’t survive without a crippling injury — or at all.

The Skully AR-1 is equipped with a full rear-view camera and navigation system, much like a car, and a heads-up display that gives you information while allowing you to keep your eyes on the road. It funnels calls and music into the helmet, and with current-generation assistants like Siri and Cortana (Microsoft’s better digital assistant) it is kind of like having Iron Man’s Jarvis at your electronic beck and call. 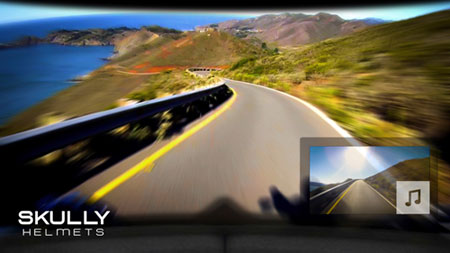 It has an LCD visor that can be lightened or darkened on command, which actually increases the Iron Man-like experience.

Your eyes remain focused on threats emerging before and behind you, your technology is at your beck and call, and you’d only need a few missiles and repulsor rays, which actually would be quite useful on a bike, to complete the Iron Man-on-a-bike experience. It’s wicked cool, but it also is far safer — and for folks who ride, or have loved ones they want to see remain whole and alive, I think this technology is a must-have.

That said, I can see a number of ways to improve the AR-1 over time.

Camera technology is advancing rather impressively. For instance, I’ve installed an FLIR Pathfinder military grade infrared camera on my project car — both because that’s what the car had in one of the James Bond movies and because it can better see problems at night at a distance — like an animal or pedestrian in your path.

When your car hits a deer, it can be ugly. If you hit one on a bike, it can be deadly — and bikes are far more vulnerable to things you can’t see than cars are. I can imagine a future split display for night driving with an additional infrared camera facing forward for night use to identify problems in front of the bike.

One recent improvement in rear-view cameras is the ability to direct it electronically. Kenwood just started selling a new rear-view camera, the CMOS-320 — I have two now — that can electronically, not mechanically, change views on demand. It can go from straight back, to zoom, to blind-spot view (both directions) to looking down, which could be useful if you should want to see if what you’ve strapped behind you is still there, something I’ve actually wanted to do on a couple of occasions. Implemented properly, this new tech would nicely enhance the helmet’s capabilities.

Sound technology has come a long way in the last few decades. Back in 1982, I bought a set of military grade headphones. They had side microphones and amplifiers built in that both amplified the surrounding natural sounds and blocked the ear-damaging reports of a gun.

On any bike, it’s often a sound that warns you of a threat before you can see it — whether it’s an unusual engine or tire sound, or someone approaching from an angle you can’t see. Current generations of these headphones add music and communications to the experience, and I can see this capability being built into future helmets that would actively blank the annoying and ear-damaging noises and let in the world around you while still allowing you to hear your music.

For instruments and cars, there is a product called “Maestro,” made by Idatalink — which apparently still doesn’t work with any of my cars — that will pull information off the car and display it graphically for you. That includes information like g-force, engine heat, tire pressure, parking sensors, air conditioner controls, etc.

Many current-generation motorcycles also output a lot of information, some of which is captured by gauges and some not. An addition like Maestro could put the critical information on the screen that you need to both assure you won’t break down and, if you are a “spirited driver” allow you to push the bike a bit harder while leaving your eyes on the road.

Finally a small air bag system to protect your neck better in a crash. There is actually a system in the market today, Hit-Air, that is built into clothing — but the neck brace could be enhanced by integrating the feature into the helmet as well. Neck injuries resulting in paralysis are more common than you might realize in motorcycle crashes, and an integrated clothing/helmet solution could go a long way toward making riding far safer. A company in Spain has one on the market today.

I started out by saying that the Skully AR-1 Helmet is not only safer but also more fun — and I’ve left the more fun part till the end. When you are more aware of what is around you, when you can listen to your tunes and use GPS so you don’t get lost and can stay in touch more easily, your stress level goes down and you can enjoy your ride more.

Without this stuff, you are trying to ride while you juggle a phone or GPS system, worry about what you’re missing when your phone vibrates on your waist, and could get surprised by what you don’t see coming up fast behind you. (Bikes aren’t the only things that go fast on the twisties in the hills).

That peace of mind means you simply can enjoy your ride more — focus on the rhythm gliding poetically through corners and blasting down straights, knowing you are both connected and in control while listening to your favorite tune. That is how you combine safe and fun into something amazing — and really, is there a guy who doesn’t want a helmet like Iron Man’s?

If you followed Apple’s financial report, you saw that it did surprisingly well on PCs and smartphones but not so well on tablets. While iPod-like devices seem to be gaining renewed interest, Apple’s lack of focus on iPods isn’t doing it any favors there, either.

It isn’t just Apple — tablets are pretty soft in general, and Microsoft’s numbers indicate PCs suddenly may be where it’s at. The whole “PC is dead” thing just may have backfired. One tablet that is stepping out from the iPad-clone pack, though, is Nvidia’s Shield Tablet.

With an optional custom game controller and the ability to stream high-end games from the cloud or your PC, plus a K1 advanced graphics engine and a very clean design, this product seems well suited for folks like me, who like to game on their tablets and still have battery life left to do other things.

At US$299 for 16 GB, it is priced a bit above other tablets in its class, but if you want something tuned for gaming, drawing and entertainment, this could be the product for you.

You can preorder but not buy it yet, and because I like products that think a bit out of the box, the Nvidia Shield Tablet is my product of the week.