I was watching “The Daily Show” the other night and Jon Stewart walked through the failures of the Obama administration, concluding that anyone who did this badly couldn’t be reelected if not for the Democrats’ secret weapon. He then showed Mitt Romney as that secret weapon, along with a number of troubling clips that made a powerful point about the impressive number of mistakes Romney is making. It’s so bad it reminded Stewart of the book Flowers for Algernon.

I was coincidentally working on a series of articles on reputation management and reviewing a number of cases, many of which involved politicians, in which the Internet — and specifically, Google — was used to do massive damage by spreading false information or changing rankings, and I remembered the close scary relationship Eric Schmidt has with President Obama.

The working theory is that Schmidt was trading favors in advance of Apple’s anticipated legal win that might lock Google’s Android platform out of the U.S. market unless Obama were to use his trade override authority.

Romney is no fan of Google, suggesting that even if Obama didn’t ask for Google’s help, it might clandestinely provide it in order to prevent a likely catastrophe, given the Samsung judgment.

In any case, Google has massive control over what we see on the Web and virtually all news services pull from this source. We likely should be anticipating a time when a company like Google could control elections and move to prevent it before we become the United States of Google.

I’ll explore that this week and close with my product of the week: the service that I was researching, which is specifically designed to prevent the kind of thing I’m alleging Google may be doing to the Romney campaign from happening to you.

The fact that Google manipulates search results is a matter of record. Advertisers can pay to ensure their pages rank higher than competitors. This kind of manipulation by third parties used to be far more prevalent a few years back. It was how reputation protection firms used to operate, I recently found out. Because so many people were manipulating the results, Google made some changes that now make it nearly impossible for anyone to engage in this practice — anyone but Google, that is.

Any manipulation would have to be a bit subtle. You’d want to push reporters looking for stories to generally positive ones on the candidate you were supporting and negative ones on the one you didn’t support.

This line of thinking admittedly relies on some assumptions; one I’m making right off the top is that a very successful president will likely have a higher percentage of positive vs. negative comments. But even for a successful president, I’d assume that negative comments would tend to be more pronounced than positive ones, because a president’s decisions touch so many people, and we tend to write more prolifically if we are pissed off.

A challenger who’s not holding office just won’t have the opportunity to touch as many people negatively — directly or through proxies — and thus wouldn’t be in a position to piss off as many folks. You’d think this would be a problem, even for a strong incumbent.

Obama, as Stewart pointed out in his own piece, isn’t that strong. In fact, most of the high-profile metrics — economy, unemployment, etc. — are well below where they typically would need to be for reelection. Even foreign affairs, where he is typically strong, is suffering due to the death of a diplomat who apparently was negligently underprotected.

So, even with Romney’s gaffes — and he has made a few — you’d expect Obama’s first page results to display a more negative trend. Not being an office holder, Romney can’t really be blamed for any of the pronounced national problems.

My test was to bring up two Web pages in Google — one on Romney and one on Obama — to compare tone.

The reason there is a shorter list for Obama is that news on Romney starts with item two after the official Romney site, followed by a couple of items on Romney before a list of mostly negative comments and anti-Republican sources.

The Obama news comes after “We have a choice” – Barack Obama, Images of the guy, Whitehouse.org (OK, there has to be one natural advantage of being in office), and his biography (positive).

In fact, from the first page results, you’d conclude that the president must have been the best damn president we’ve ever had. Even under news, Romney is primarily pounded by the YouTube video of his ill-conceived 47 percent remark (YouTube is owned by Google), while Obama’s news focuses on his being ahead in the polls. There’s also the NFL ref controversy, with comments from both candidates, and there is a piece about Romney pointing out weaknesses in Obama’s performance. Other than the Romney comments, which clearly look biased, I didn’t see anything on the economy, foreign relations, unemployment — or even Joe Biden, who traditionally has foot-in-mouth disease.

So, flipping to page two, we see mostly negative comments on Romney on poll results, his 47 percent comments, and his campaign reset. For Obama, it must have been one hell of a San Francisco trip, because it is mostly that, followed by comments on Obama’s “new economic patriotism” and his improving poll results.

There’s nothing negative about anything connected to the administration, and that one 47 percent comment would appear to be the most important thing happening in the world.

I started this thinking I was going to have a little fun, and I’m ending it having an “oh crap!” moment.

Wrapping Up: The United States of Google

Based on this simple test and my belief that there is a quid-pro-quo agreement either in place or implied between Google and the administration, I think there is a high probability that Google is influencing search results to favor Obama.

We know that there are about 47 percent of the people who will vote Democratic regardless, and about the same percentage who will vote Republican. It is the 6 percent in the middle who are struggling, and I think it likely that Google is manipulating its information to favor that 6 percent.

Now you might wonder why I didn’t test against Bing, which is because Google believes Microsoft pulls from its search results suggesting that even if they were the same, Google would likely be the cause.

I later went back and did the Bing check just for jollies, and it was different. While the Obama results were very similar; the Romney results were far more positive. You should try this yourself. WTF!

So, whether you agree with me or not, I think there should be a set of controls making sure this can’t happen. I doubt any of us, particularly those working at Apple, wants to live in the United States of Google. Apple has proven it can beat Google, but even Apple can’t beat the U.S.

I think the idea of Google deciding a U.S. presidential election is not only unfair — it’s frightening.

What really got me started on this was a letter from a guy who was being smeared all across the Web by a couple of criminals he’d caught stealing from him. He asked for my help, and I suggested a number of reputation firms that had good reputations but that I’d never used. In exchange I asked him to share which one he picked and what the results were.

A few days later he wrote me saying the attacks had stopped, and he was actually getting more Web business as a result of his US$2,500 expense. So I contacted the firm myself and found it was a blend of traditional private investigation and Web expertise, and it was partnered with the leading law firm on reputation protection. 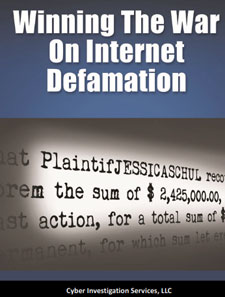 It actually has a free book called Winning the War on Internet Defamation that is worth reading if only for the stories.

One is about a top woman executive who was blackmailed by old personal pictures. The attacker wanted both to have sex with her and get $10K the morning after, or he would destroy her career with the photos.

The company’s name is Cyber Investigation Services. If you are ever in this kind of nasty trouble — or know someone who it — these folks may be able to get you out of it.

Google and law enforcement aren’t much help, and at some point you’ll likely have a pissed off coworker, ex-spouse, ex-employee, or crazy stalker out to destroy your reputation or career. When that happens, remember this post. Because Cyber Investigation Services helped the guy I sent them, its services are my product of the week.