Those Crazy People Running the US Government and News Corp. Need New Jobs

This last week was filled with events that made me wonder how many of our leaders had sent their brains to wacky land. On the political front, the U.S. president, our president, threatened financial default and elderly folks on fixed social security incomes in order to get the U.S. credit limit raised. Threatening old defenseless folks always works so very well, and the collapse of the U.S. credit rating would do wonders (he says sarcastically) for the U.S. recovery.

On the right, folks were walking out of meetings and taking the equally brilliant tactic of not actually negotiating. But this was all topped by News Corp., which got caught hacking into the phone of a murdered child and was accused of doing the same to 911 victims. Then, instead of holding the folks who did it accountable, the company used Bizarro decision making to retain the top executive responsible while firing the rest of the company. Seriously, they really did that — it’s not a joke. Which, and this should have been obvious, only made things worse.

Some of what is coming outdefines “twisted.”

I’m going to look at the crazy folks who are running things this week. I’ll close with my product of the week — a US$1,000 computer keyboard that suggests what the PC could have been but unfortunately isn’t. (My wonderful wife got me one for an anniversary present).

If the U.S. were a company in financial trouble, and any entity that is spending far more than it takes in is in financial trouble, we would fire the board and the CEO or shut it down. Seriously, this is how we do things in the commercial world. To net this out, we have a country that is deadlocked and divided. On one side, we have folks focused largely on preserving entitlements — and on the other, folks who are trying to preserve wealth. Neither side is focused on the core problem, which is that the country isn’t bringing in enough money — and I don’t mean taxes.

Only a country would look at fixing a revenue problem by effectively charging the employees increased fees. That’s what income taxes are. It would be like a firm deciding to take money out of your paycheck. We could call it a continued employment benefit to address a problem that really has to do with the company not selling enough products and giving too much away to other companies for free. It would take Andy Grove, Steve Jobs, or Larry Ellison about 30 seconds to come up with workable solutions.

So let’s take a series of billion and trillion dollar costs we could cut with relatively little pain.

For instance, the War on Drugs. It costs billions ($23B so far this year); it is largely about as effective as prohibition was (marijuana is one of California’s biggest and most profitable businesses — that isn’t taxed); and it is killing kids who try really stupid ways to get around it. Make drugs like alcohol: tax them, regulate them, assure their quality, and turn a money hole into a source of income (folks are going to use them anyway). The whole concept of the “War on Drugs” sounds like something a creature who had never met a human would come up with. It doesn’t work. It can’t.

And as for nation building ($787B Iraq, $433B Afghanistan, $1.2T total), not only do we suck at it — we also can’t afford to do it. We don’t even need to get to the “should we or shouldn’t we” part. Like any company or family, if you don’t have the money to do something, you don’t do it — well anyway, you shouldn’t do it in the first place. We seem to have this idea we should pay others to let us do the police job. Trust me — that isn’t any way to run a business.

Medicare/Obama-care/entitlements. The issue of whether we need them or not is laughable given what a great healthcare program Congress has voted for itself. Our core problem is that our medical costs are several times what they are in other countries; we have both the worst coverage and the second-highest cost. If you had this kind of a program in any company, a smart HR manager would have fixed it years ago.

Finally, we could just eliminate the massive problems of graft and inefficiencies in government services. In effect, bring in a team of turnaround managers, give them the authority to actually act, and let them focus on making government more efficient.

In the end, though, what’s really not working is government — and if this were a company, we’d start by cleaning house at the top in order to actually get things done. Elections are coming; I’m getting on the “throw the bums out” train.

A World Without News Corp.

One of the advantages in aggregating a large chunk of the conservative media under one company is that it can be coordinated and the power multiplied. However, we are now seeing the disadvantage — and that is that if the parent gets into trouble, as is often the case when too much power is aggregated, the entire structure can collapse, shifting the balance of power in the other direction. In short, this last week was a great week for MSNBC (and for “The Daily Show.” This is both funny and sad).

The allegations of wrongdoing are now spreading to other News Corp. properties and have been connected to U.S. 911 victims. It seems that it is only a matter of time before U.S. news companies are accused of these cellphone hacking crimes. Recall, these are connected to a practice called “pretexting,” which became visible during one of the HP scandals. At the time, it was identified not only as common, but also, in many cases, legal (turns out It wasn’t).

Murdoch’s “burn the bridges” approach to the problem was ill-advised. What he should have done was punish those who had used the cellphone hacking practice inappropriately and then ban the practice.

By shutting down the entire paper but retaining the head of it, he gave the impression of a massive attempt at a cover-up, and the result was a feeding frenzy, with tons of now-fired employees who will likely share that hacking into cellphones wasn’t the only questionable thing being done.

Containment may be impossible at this point, and that places the following publications and properties in the U.S. at some risk: Fox News, The Weekly Standard, Barron’s, the New York Post, The Wall Street Journal and The Times. Entertainment properties are probably safe but could experience turmoil if News Corp. is broken up (now possible).

As I was finishing this up, a Murdoch interview showed up in the WSJ indicating he was very pleased with how all of this was handled — yet another mistake, given the broadening probe.

News Corp. is instituting an investigation, though — like I suggested — and one would hope it might rethink the closing of the News of the World, given the majority of folks there who lost their jobs did nothing wrong, and the closing didn’t have the intended result. Bad decisions can be reversed.

We often talk about running the government like it was a company. I think the politicians should remember that history does suggest if they can’t get work done they will be replaced — and as many of the revolutions now going on suggest, that isn’t always done very nicely.

In the end, the problem won’t be fixed unless the government focuses on making the U.S. more profitable; taxing the rich or taking away services just won’t get the job done.

The lesson from News Corp. is don’t commit crimes to get news, and when caught misbehaving, punish the folks who made the mistake. Blowing up the company in an attempt to protect the executives doesn’t work. Oh, and just because you make a bad decision doesn’t mean you can’t reverse it and do the right thing. You listening, Netflix?

I look at the Datamancer products as things from an alternative world. They are what would have resulted had we continued down a Victorian age of individual craftsmanship and away from assembly line, mechanized production.

My wife bought me an Aviator (here is the line on eBay) for our anniversary, and now I want the matching monitor. Using the keyboard allows me to imagine life as it might have been: different, perhaps less harried, more elegant, and a lot more magical. Where having a rocket belt or a ray gun seems just over the horizon. 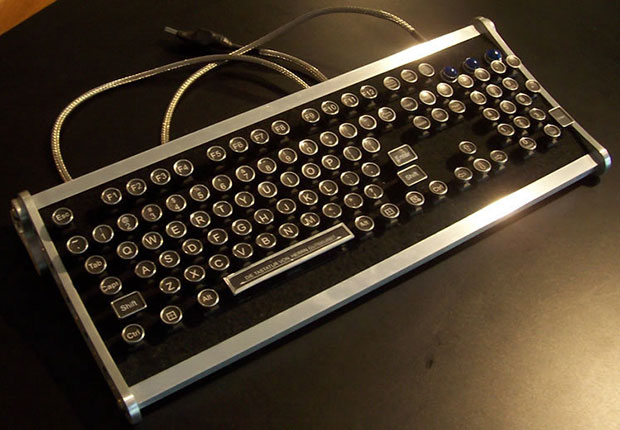 ‘The Aviator’ Keyboard by Datamancer

This has become my dream keyboard, and by this I mean it helps me dream. It is functional art. I think we could all use a moment of magic from time to time, and because the Datamancer keyboard brings such a moment to me — and especially because it is the best thing my wife has ever given me since she said “yes” — the Datamancer Aviator Keyboard is my product of the week.