To Your Health: Intel Inside Your Headphones 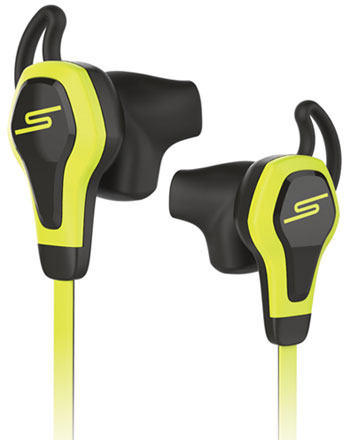 Intel on Friday announced it is working with rapper Curtis “50 Cent” Jackson’s SMS Audio to develop earbuds that will monitor users’ heart rates.

The SMS Audio BioSport In-Ear Headphones will have an earhook and will be powered by the user’s smartphone.

They will be sweat- and water-resistant.

The earbuds will be available from SMS Audio in Q4; pricing has not yet been announced.

“This is a pretty unique product when compared to other earphones today, in terms of biometrics — but also [because] no battery is required,” Intel spokesperson Bill Calder told TechNewsWorld.

More About the Earbuds

The SMS Audio BioSport In-Ear Headphones will be compatible with fitness app RunKeeper for iPhone and Android smartphones. Other fitness apps will be supported in the future.

Communications are hard-wired instead of going through Bluetooth, because a wired earbud does not need to be charged or paired or require a power source.

The earbuds have infrared optical sensors that monitor the pulsing of the skin within the user’s ear. They were so designed because the inside of the ear is static, and additional motion sensors are not required.

The earbuds have an accelerometer that corrects for motions such as users shaking their heads.

Raw data captured by the earbud sensors are transmitted to the user’s smartphone for analysis and processing.

The earbuds are designed to work with any smartphone.

Intel designed the layout and circuitry, handled the system integration, and developed the firmware, while SMS provided input on the earbuds’ sound and their acoustic chambers. It also selected the final design.

Sports wearables “are one of the main target markets for connected devices,” Brian Blau, a research director at Gartner, told TechNewsWorld.

However, the SMS Audio BioSport’s digital tracking of users’ body performance “probably narrows the demographic for its appeal.”

Intel Wants to Be on Your Body

The wearables market is Intel’s target this year, CEO Brian Krzanich said at CES 2014 in January.

In fact, he had a prototype of the SMS Audio BioSport In-Ear Headphones brought on stage during his speech.

Intel plans to push wearable devices powered by Edison, a 22nm dual-core System on a Chip (SoC) that is basically a Pentium-class PC in an SD-card form factor.

“We believe wearables to be an important growth area, and we are working on multiple fronts to intersect it,” Intel’s Calder said.

The earbuds constitute “the first of our products to hit the market with a partner,” he continued.

“This is kind of a ho-hum announcement in my opinion,” Danielle Levitas, a group vice president of research at IDC.

“There is so much more Intel can do with their technology and related acquisitions; it’s just the beginning for them,” she told TechNewsWorld.

“This looks like a fun and useful device, but how it does will depend on the branding, the marketing budgets, and how well it works,” Gartner’s Blau suggested. “We haven’t seen these types of devices taking off in huge numbers, partly because people are waiting to see what Apple will do.”

Intel and SMS Audio may face an uphill climb: More than half of consumers in the United States who own a modern activity tracker don’t use it any more, and one third of U.S. consumers who own one stopped using it within six months of getting it, Endeavor Partners found.

That could be because “not everyone wants [to track biometrics] without feedback telling the user what’s optimal for them,” IDC’s Levitas said.

Still, both the headphones and earbuds market and the fitness-device market are crowded, and the Intel-SMS Audio partnership will have to take on LG, which already has a similar product on the market — although it uses Bluetooth connectivity, Levitas pointed out.

While the earbuds will help promote Intel’s brand into more consumer segments and into devices other than PCs, the chip maker’s brand does not do much for the earbuds, in Levitas’ view.

The 50 Cent branding may not be that effective either.

Hip hop and music artists are good for selling devices, but “this isn’t Beats, and working out is the key attribute for this particular offering,” Levitas said.

“I find it difficult to equate rappers with sports,” remarked Gartner’s Blau.