Toshiba on Monday announced what it claims are the world’s first LCD TVs that render three-dimensional (3D) images without the need for glasses. 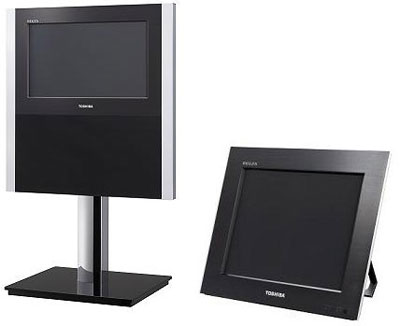 The new Glasses-less 3D Regza GL1 series was unveiled at the Combined Exhibition of Advanced Technologies (Ceatec) in Tokyo.

They use technology similar to that employed in the Nintendo 3DS hand-held game console. The larger of the two uses the Cell processor, which is also used in the PlayStation 3, to process images.

They will be released in Japan by the end of the year.

However, viewers must sit within a specific zone in order to get the 3D effect.

Given this technological limitation, and the poor overall state of the global economy, will the new TVs be in demand? And will they replace 2D TVs?

Peering at the Glasses-less Regzas

They use an integral imaging system and a perpendicular lenticular sheet to display smooth images. Toshiba’s image processing technology creates nine parallax images from the original content and renders them in 3D. Both have high-definition LED backlit LCD panels created for 3D capability without glasses.

“Tests on this approach have had surprisingly good results,” said Rob Enderle, principal analyst at the Enderle Group.

The integral imaging system reproduces the design and tracks of beams of light by sampling light at several angles, then combining them into one smooth, continuous display, Toshiba said.

A lenticular sheet consists of an array of lenses that transmits images in a horizontal plane. The sheet is semi-circular in profile.

The 20GL1 set integrates the Cell Regza Engine, which is based on the Cell Broadband engine, to deliver superior multimedia processing. The Cell Broadband Engine was jointly developed by IBM, Sony Group and Toshiba for the Sony PlayStation 3. It has a central processing unit based on IBM’s Power Architecture technology.

That helps improve the image.

“There’s quite a lot of post-processing of the image to ensure it looks sharp and shadow free,” Enderle told TechNewsWorld. “The Cell engine carries the bulk of the load and contributes quite a bit to the quality of the 3D image Toshiba’s 3D TV sets will offer.”

Toshiba’s 20GL1 uses an LED backlit LCD panel, which positions 1,440 LEDs directly under the LCD panel. The LCD panel has about 829 million pixels — about four times the number in a full high-definition panel. Each pixel supports RGB display in a layout designed for 3D imaging, through replicating image data from each pixel nine times. The lenticular sheet controls the direction in which the replicated image data is transmitted.

Gotta Be in the Zone

One of the major drawbacks of Toshiba’s glassless 3D technology is that viewers must sit in a specific zone in order to get the 3D effect. There is a viewing zone that can be seen as 3D; however, outside of this zone, images may not be seen in 3D, in whole or in part, according to the company.

“The 3D technology always consists of a trade-off between viewing angles and convenience,” Carl Howe, director of anywhere consumer research at the Yankee Group, told TechNewsWorld. “Glasses allow viewers to sit wherever they want, because they can control the images your eyes see. If you don’t use glasses, the TV has to control which images go to which eye, which of necessity restricts the viewing angle,” he added.

“This technology works by angling two different images to each eye from the screen, which is why you need to be sitting right in front of the set,” Enderle said. “However, the image falls apart as you add people who are sitting off-center to the set,” he remarked.

“One of the reasons why these Toshiba sets are small is that you need an optimal seating position,” Pietro Macchiarella, a research analyst at Parks Associates, pointed out. “Toshiba’s probably targeting an audience of one or two viewers at a time.”

However, the move’s probably a good marketing tactic because Macchiarella is “a bit skeptical about the short-term feasibility of glass-free 3D TVs with larger screens.”

The future success of 3D TVs — ones the require viewers to don specs or otherwise — is still a topic of much speculation.

“I think 3D TV risks becoming the Quadraphonic Sound of the 2010s, which is why Toshiba is taking the risk of promoting 3D without the need for glasses,” the Yankee Group’s Howe said. “Consumers have invested too much in new flat-panel TVs in the last few years to go out and buy 3D TVs except in limited quantities. 3D TV isn’t going to be the breakout hit technology of the holidays for 2010,” he added.

“The 3D TVs will likely do well in space-constrained Japan, but will likely have difficulty getting accepted outside of that country due to their small size and relatively high price,” Enderle predicted.

“Right now, the diversity of technologies, the high prices, the distinct lack of good 3D content, and the lack of widespread of 3D conversion technology like that used by Cyberlink are the major barriers to adoption,” Enderle said.