Toshiba on Monday unveiled the Libretto W100, a limited-edition ultra-mobile concept PC. It has dual touchscreens and runs Windows 7. 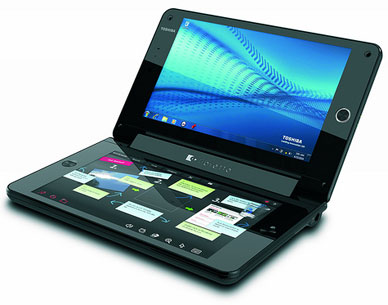 The W100 is the latest in Toshiba’s Libretto line of subnotebooks. It has two 7-inch diagonal multitouch displays with a resolution of 1,024 x 600 pixels and a six-mode virtual keyboard with haptic response.

Haptics is a tactile feedback technology, which means the virtual keyboard provides users sensory feedback when it’s typed on.

The multitouch screens can work independently or together, Toshiba said. For example, users can check email on one screen while surfing the Web on the other, or view two separate documents simultaneously, or view a webpage across both.

Based on a 1.2 GHz Intel Pentium U5400 processor, the W100 has 2 GB of DDR3 memory, a 62 GB solid-state drive, and a 1-megapixel webcam with face recognition. It has a built-in 3-D accelerometer that lets users rotate it into portrait or landscape modes.

The W100 is about eight inches wide, nearly five inches deep, and just over an inch high. It weighs 1.8 pounds and has an eight-cell battery.

It’s All in the Mind

Toshiba has labeled the W100 a “concept” PC and will have only a limited production run for the device.

“Products in this class are unique and very distinctive,” Rob Enderle, principal analyst at the Enderle Group, told TechNewsWorld. “They aren’t typically sold in high volume, but they let people get hold of something that otherwise might not exist.”

The W100 will be released in August, Toshiba spokesperson Jared Leavitt told TechNewsWorld. However, he declined to say how many will be produced. It will be priced between US$1,000 and $1,300, Leavitt said. The W100 will only be available in a brushed metallic finish.

Toshiba is aiming the W100 at the technologically savvy customer.

“Getting this concept PC out into the hands of early technology adopters will allow us to gather invaluable feedback that we can filter into future product developments,” said Carl Pinto, vice president of product development at Toshiba America Information Systems.

Customers for this device would be developers rather than consumers, pointed out Carl Howe, director of anywhere consumer research at the Yankee Group.

“It’s a clever idea, it’s interesting, and it’s probably a prototype Toshiba wants to get into the hands of developers,” he said.

The W100 can run “just about any application users have on their standard PCs,” Toshiba spokesperson Leavitt said. 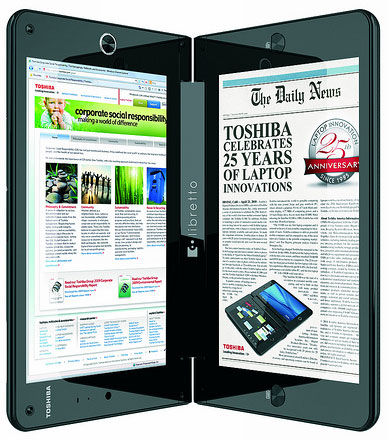 However, Win7 may not be the best choice for a device of this kind, the Yankee Group’s Howe said.

“Windows 7 isn’t really designed for a dual-segmented screen concept,” Howe told TechNewsWorld. “The W100 might have more success with the Android operating system.”

Some early reviewers have panned the W100’s lack of a physical keyboard. However, Enderle thinks this is not all bad.

“As people get used to iPhones and iPads, they are becoming comfortable with virtual keyboards, but it remains annoying to have to type on the screen you are looking at if you’re creating more than a short note,” Enderle explained. “On the other hand, when browsing the Web or reviewing content, the extra real estate the physical keyboard uses could come in handy if you could put in a screen there,” he said.

“The lack of a physical keyboard hasn’t seemed to hurt the iPad or iPhone,” Enderle pointed out.