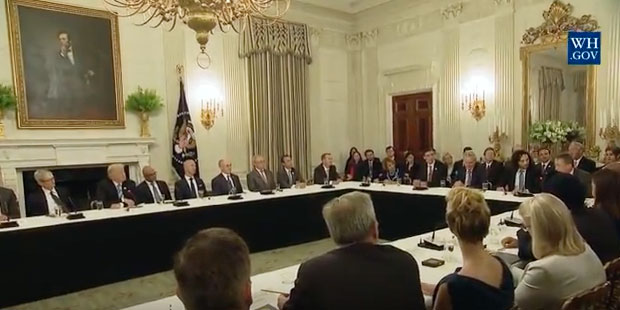 President Donald Trump aims to save taxpayers US$1 trillion over the next 10 years with a little help from America’s high-tech industry.

“Our goal is to lead a sweeping transformation of the federal government’s technology that will deliver dramatically better services for citizens,” the president said Monday at a roundtable session of the American Technology Council, composed of the leaders of 18 U.S. tech firms including Apple, Amazon and Microsoft.

“We’re embracing big change, bold thinking and outsider perspectives to transform government and make it the way it should be, and at far less cost,” he declared.

Outdated federal IT is a big problem, the president acknowledged, but “we’re going to be working on it and we’re going to solve the problem, and up to a trillion dollars in savings for taxpayers over the next 10 years. Over a trillion.”

Although savings from upgrading federal IT could be substantial, the $1 trillion number may be overly optimistic.

“The president’s estimate of $1 trillion in savings over a decade sounds like it was made up in the fly,” Charles King, principal analyst at Pund-IT, told TechNewsWorld.

The president also told participants in the roundtable discussion that his administration is fixing airport systems, upgrading Defense Department and Veterans Administration systems for seamless transfer of information between the agencies, and working diligently on immigration so tech companies can get the foreign workers they need to continue to innovate.

The president last month signed an executive order calling for modernization of federal IT.

“The modernization plan required by that order isn’t due until August, so we’ll have to wait for that to learn what, specifically, ‘modernization’ entails,” said Julian Sanchez, a senior fellow at the Cato Institute.

“It will be months, if not years, from there before we can assess whether it’s actually being implemented effectively,” he told TechNewsWorld.

The focus of the order is on upgrading antiquated federal hardware and software. That will require money — money that appears to be absent from the president’s budget.

“If you’re talking about an IT overhaul of the federal government, I didn’t see a comprehensive plan in any of the budget documents that I went through,” said Chris Bronk, an assistant professor in the College of Technology at the University of Houston.

An IT overhaul also would require leaders, which seem to be missing at the moment.

“You’re not going to get results from big changes if you don’t have federal executives with a mandate to make the changes,” Bronk told TechNewsWorld.

The executive order also calls for moving to shared IT infrastructure and cloud services, a process started by the Obama administration.

Moving to shared infrastructure and cloud services “entails up-front costs, but has the potential to save the government a decent amount of change in the long run by exploiting economies of scale — and by scaling better as the demands of individual agencies change — as well as making it easier to harden federal systems against cyberattack,” Cato’s Sanchez noted.

Sweeping changes in federal IT have been proposed before, but they tend to lose steam quickly.

“Consider that the government maintains a massive underground facility where federal employee records are still maintained on paper after decades of failed efforts at a digital transition,” Sanchez observed.

“You have all the usual hurdles of sweeping technology changes in large institutions coupled with the red tape — some of it there for sound reasons, like avoiding corruption or ensuring the privacy of citizens’ sensitive data — that makes federal procurement a slower and more cumbersome process than most businesses have to deal with,” he added.

Archaic hardware and software is just part of the problem.

“There is no central ‘buyer’ of IT solutions and services. That means individual institutions, agencies and groups negotiate with vendors they choose,” explained Pund-IT’s King.

“That tends to make systems costlier and more complex than necessary, and stymies integration efforts,” he continued. “Unless those issues are also targeted by the president’s plan, its hoped-for benefits will be difficult or impossible to achieve.”

The president’s attempt to give the nation’s tech industry a bigger role in transforming federal IT has promise, said Jim McGregor, principal analyst at Tirias Research.

What’s more, a government-industry partnership could help close the virtual divide between the sectors.

“We hope that divide closes, because it’s important they cooperate,” McGregor said.

“Drawing on insights from Silicon Valley — something the previous administration also tried to emphasize — could yield real gains if there’s the will and focus to follow through on a transformative approach,” Cato’s Sanchez added.

However, “it could also easily become an excuse for annual photo ops with tech celebrities, which doesn’t yield anything concrete,” he acknowledged.

“I’ll hope for the former,” said Sanchez, “but I won’t be shocked if we get the latter.”