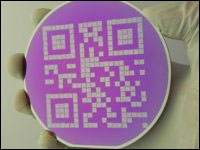 Jeroen de Vries, a Ph.D. candidate at the University of Twente, has developed a prototype storage system that might last for up to 1 million years.

This might be needed if the planet were devastated by a natural disaster, or as a reference for future intelligent life on Earth — or for visiting aliens.

“You must then think about archival storage of between 1 million and 1 billion years,” De Vries said.

“We should be storing the wealth of human knowledge, but [that] needs to evolve with the technology,” Jim McGregor, principal analyst at Tirias Research, told TechNewsWorld.”It should be passed from one storage technology to the next as it becomes available, and we should find secure ways to store it.”

What De Vries Did

De Vries used a tungsten wafer for the storage medium because tungsten can withstand extreme temperatures.

QR codes containing data were etched into the wafer. The end result was a giant QR code, each pixel of which was itself a QR code that contained data.

The wafer was then coated in silicon nitride for protection.

Silicon nitride has been widely used in high-temperature applications, and it is one of the few monolithic ceramic materials that can survive the severe thermal shock and thermal gradients generated in hydrogen/oxygen rocket engines.

“Instead of storing an electrical state and a bit, it is storing a physical state and, presumably, a certain number of bits of data,” McGregor said. “It’s almost like recreating a record album, but a million times more durable.”

The project “is very creative work,” remarkerd Dave Hill, principal at the Mesabi Group. “If this proves practical, cost-effective and scalable, then it will prove useful.”

The wafers should be stored in a stable place such as a nuclear storage facility, he suggested.

He plans to conduct more research into whether they can withstand higher temperatures such as those encountered in a house fire.

Issues With the Technology

“We could get into how much data will need to be preserved for many, many years, how to migrate from one media to another, and how to read data when software becomes obsolete,” Mesabi Group’s Hill pointed out.

QR code is a data representation standard and not a form of information, Jay Heiser, a research vice president at Gartner, told TechNewsWorld.

“It would take a lot of work, and there would have to be some clues, to enable some future society to reverse-engineer arbitrary representations of data,” Heiser continued.

Language is an arbitrary representation.

We would have to figure out a way to maintain the equipment to read and output the stored data, and to ensure electricity to power it was available for 1 million years as well.

Failing that, Og the Caveman v2.0 would be unable to read the data stored on the discs after 1 million years even if the language and cultural references somehow remained unchanged.

“He would have some really artistic plates and each one will be unique,” Tirias’ McGregor said.

The Next Million Years

“The notion of substantially elongated media is in theory intriguing,” said David Russell, a vice president and distinguished analyst at Gartner.

Having the media without a player would not be effective, although if the format remains viable from a financial perspective, players are more likely to be available, he suggested. “Given our history, the odds of this would seem very low, and only self-describing media such as hieroglyphics remains readable over long periods of time.”

“You won’t see it in storage in 50 years,” Zhang predicted.