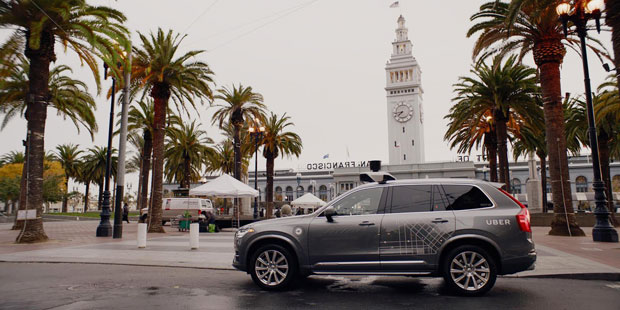 Uber on Wednesday rolled out a fleet of self-driving cars in San Francisco, the second U.S. city to participate in its pilot project. Pittsburgh was the first.

Riders who request an UberX — the lowest-priced Uber vehicle — will be matched with one of the self-driving Volvo XC90 SUVs if one is available and if the customers are willing, according to Anthony Levandowski, head of Uber’s Advanced Technology Group. They can accommodate three passengers.

San Francisco “comes with its own nuances, including more bikes on the road, high traffic density and narrow lanes,” Levandowski noted.

San Francisco “is one of the most challenging cities for an autonomous car … because there are lots of obstacles, including cable cars, which are unique to the city,” said Rob Enderle, principal analyst at the Enderle Group.

Further, “the hills are particularly steep,” he pointed out.

“The buildings are close and high, blocking GPS signals and challenging GPS accuracy, and pedestrians generally don’t follow traffic signals or use crosswalks,” Enderle told TechNewsWorld. “There’s an argument that if you can handle San Francisco, you likely can handle any city in the United States.”

The self-driving Uber vehicles have drivers on board who can take control if need be.

Volvo built the vehicles and sold them to Uber, which added its own self-driving hardware and software.

They are developed on Volvo’s fully modular Scalable Product Architecture, which is used on the XC90 SUV, and on Volvo’s S90 and V90 premium vehicles.

The control apparatus is mounted on the vehicles’ roofs.

Uber’s technology consists of the sensor pod and the compute stack in the trunk — CPUs and GPUs in a blade architecture that allows easy swapping of failing parts, TechCrunch reported.

The cars reportedly have optical cameras, radar, LiDAR and ultrasonic detectors. Their iPad-based display lets users take a selfie and share the image from their ride.

Self-driving service vehicles “dramatically reduce the cost and increase the revenue” of operators, Enderle said, “because analytics can put the cars where the most demand is, they can be utilized 24×7, and they don’t require drivers — so you have vastly lower wages, benefits and insurance premiums.”

That said, the pilot project may engender opposition from cabbies and Uber drivers in San Francisco, who might “go out of their way to cause accidents with [the self-driving vehicles] to force the failure of these tests and preserve their jobs,” Enderle cautioned. “That has happened before.”

Uber began running its vehicles on San Francisco roads some weeks ago, but it has yet to obtain a permit from California’s Department of Motor Vehicles, or register with the Department as required by law.

It doesn’t believe it needs a testing permit, Levandowski argued, because “we are not planning to operate any differently than in Pittsburgh, where our pilot has been running successfully for several months.”

Also, the rules “apply to cars that can drive without someone controlling or monitoring them,” he said, and Uber’s vehicles aren’t ready to do so yet.

“We have a permitting process in place to ensure public safety as this [self-driving] technology is being tested, said California DMV spokesperson Cristina Aguilar.

“Twenty manufacturers have already obtained permits,” she told TechNewsWorld, and “Uber shall do the same.”

A key reason for the DMV regulations is “to ensure that important data like crash and disengagement reports are filed and made public,” he told TechNewsWorld.

“Google had test vehicles on the roads long before they even told the DMV they were doing this,” Enderle pointed out. “Until you start manufacturing, prevention is left to law enforcement, which is currently ill-equipped to even identify a self-driving vehicle, let alone do something about it. ”