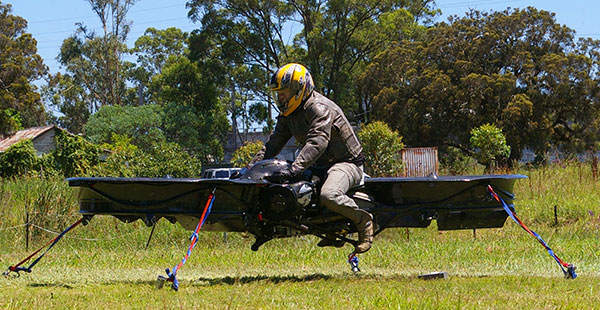 Malloy has partnered with Survice on the hoverbike project.

The U.S. Army intends to operate the hoverbike as a new class of tactical reconnaissance vehicle.

“This isn’t for jungles or mountains, but could be ideal for patrols over deserts, swamps, or other open areas with mixed terrain,” suggested Rob Enderle, principal at the Enderle Group.

“Think of it as a potentially much faster alternative to a motorcycle that can go fast where a motorcycle might bog down,” he told TechNewsWorld.

The vehicle has a ceiling of more than 10,000 feet and a top speed of about 170mph, according to Malloy.

A new, quad-based hoverbike is in the works, but the current version has a flat twin 1,170cc 4-stroke engine with one camshaft and four valves per cylinder, and a central balancer shaft.

The quad-fan design will be more stable, because the extra fans “provide far better protection against rolling, which could be fatal at speed, or if the pilot and fan made contact,” Enderle said. “That’s likely to occur very quickly if you had a power failure.”

The engine is aircooled. The hoverbike has an electronic ignition and uses electronic intake pipe injection. It runs on regular unleaded gasoline. Fuel tank capacity is 30 liters without secondary tanks and 60L with them.

The drive shafts are custom carbon fiber, and the hoverbike has a custom gearbox with 1:5:1 reduction.

The propeller has two oak blades with carbon fiber leading edges, and the airframe is carbon fiber with Kevlar reinforcement and a foam core.

The hoverbike is a little over four feet wide, about 10 feet long, and about two feet high. It weighs 230 lb.

Maximum takeoff weight is about 600 lb. It gives 45 minutes of flight time with a rider weighing 286 lb.

The next version will have a five-blade propeller.

“Fifty thousand dollars?” asked Jim McGregor, principal analyst at Tirias Research. “I thought it would be much more expensive. I want one!”

What’s a Hoverbike Good For?

The device will be invaluable for military use because “if you can travel at 75 mph without worrying about topology, it’s pretty significant,” McGregor told TechNewsWorld. “It allows troopers a lot of capabilities in various scenarios — you can swoop in from above, from the side.”

The hoverbike will come in handy in search-and-rescue scenario. It also will be useful for geologists and others who have to cover large areas of land in the course of their jobs, McGregor suggested.

Wind is not likely to be a problem, Enderle said, and the hoverbikes typically will fly at relatively low altitudes, which will make them “potentially safer” than helicopters.

Possibly inspired by the Star Wars movies, other organizations have come up with their own hoverbikes.

The FLIKE, an all-electric manned tricopter, also has been taken for a test flight.

Safety always will be an issue, and fear of lawsuits may be a serious obstacle to development, McGregor said. “Any time someone crashes or falls or hits someone, you’ll see the lawyers.”