The Android gaming market is becoming increasingly crowded, but on Thursday Sunflex announced a fresh contender: the Unu, a combination console, tablet and home entertainment device that will arrive at retail next month. 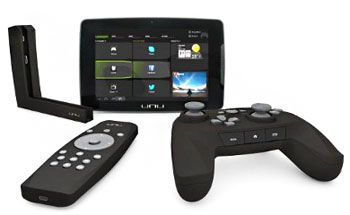 The Unu offers the promise of bringing virtually any game from Google Play to the living room TV via a TV-connected dock. The tablet device can also be used independently, offering living room as well as mobile gaming options.

“We built a custom smart TV user interface and two different controllers to match up with every entertainment experience found on the Google Play store,” said Nicki Repenning, Sunflex’s vice president of business development. “That’s how Unu was born.”

The Unu will be available in two versions, both providing full access to more than one million games and apps from the Google Play store. The Unu Media Edition will ship with a TV docking station and an air mouse controller with keyboard for US$199.99, while the “fully loaded” Unu Gaming Edition will provide players with an advanced game controller that supports tens of thousands of video games for $249.99.

The tablet device features a 7-inch full HD 1080p display and runs on Android 4.2; docked to a TV, it transforms the set into a smart TV. The Unu is powered by a 1.6GHz quad-core processor and connects via Bluetooth to an air mouse, the back side of which also includes a keyboard for browsing the Web, typing emails and texting.

Unu is now accepting preorders through GameStop, which lists the release date as Oct. 29, and Newegg, which notes a Nov. 8 release day.

A Sunflex spokesperson was not immediately available to provide further details.

Competition in the Marketplace

Sunflex is bringing out its system in a very competitive marketplace, and next month will see the release of big-name next-generation video game hardware from Microsoft — with the Xbox One — and Sony, which will bring out its PlayStation 4.

The market for Android devices has also increased with the release of the Green Throttle in April, Ouya in June, Nvidia Shield in July, GameStick in September and with Mad Catz M.O.J.O. scheduled for December.

“I’m skeptical that any microconsole-type device like Unu will get a lot of traction in the near term,” Lewis Ward, IDC’s research manager for gaming, told TechNewsWorld. “Not only are there several other microconsoles out there competing for much the same market, but with the PS4 and Xbox One waiting in the wings, I think a lot of the marketing oxygen around games will be sucked up by Sony and Microsoft in the U.S. in particular for the next six months.”

Then, too, there’s the fact that the ability to run on Google’s relatively open Android platform makes for a “lower barrier of entry right now,” noted independent video game industry analyst Billy Pidgeon. “This is an interesting play, as they are going to a mid-priced option.”

The Unu “could be squeezed when the new versions of Google TV or Apple TV arrive,” Pidgeon told TechNewsWorld. “Unu has a cool interface that could make it stand out for a time, but the conversation to smart TV features that this device offers is only going to diminish as more smart TVs come out.”

The biggest distinction that the Unu offers may also not be enough to sway some consumers.

“The Unu is distinct in that one of the two bundles ships with a unique, pre-paired controller and docking station, and the company has a stronger European orientation,” said Ward. “But until I see competing products/services like GameStick or Ouya break trough and make significant inroads from a sales perspective, I’ll remain equally skeptical on the prospects for Unu.”

The Unu’s pricing may not help it, either.

“It is $50 less than the Nvidia Shield or a PlayStation 4, and it really can’t even be a replacement for the PS3 at this point,” said Pidgeon. “This is more for the consumer who isn’t in that hardcore gaming arena.”

At the same time, “that’s the problem with gaming-centric tablets, because other things can come in that market a lot cheaper,” he added. “That gaming-centric consumer might not be satisfied with this device.”