US Navy Will Soon Pack Laser Heat in Persian Gulf 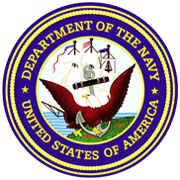 For the first time, the U.S. Navy plans to deploy a solid-state laser weapon on board one of its vessels, with the laser’s debut scheduled for the Persian Gulf during fiscal year 2014. In a press release, the Navy said development and testing have resulted in a weapon that can “perform actions ranging from non-lethal disabling and deterrence all the way up to destruction.” 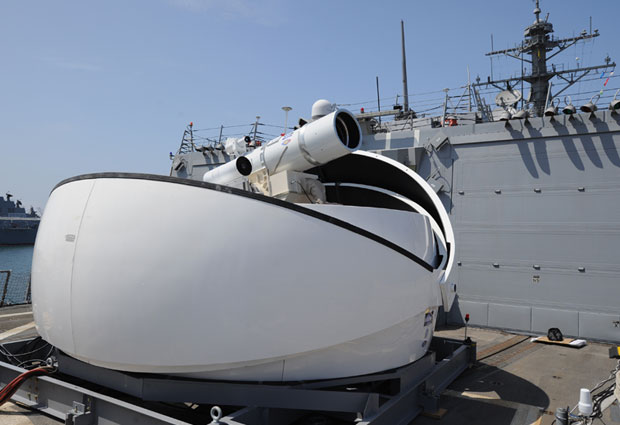 The laser will be deployed on board the USS Ponce, an Austin-class amphibious transport dock that was retrofitted in 2012 as a staging base for helicopters and vessels that take countermeasures against mines.

The Ponce is now in the Persian Gulf. It will serve as a testbed platform for the Laser Weapon System (LaWS) when a prototype weapon system is installed on it sometime after October. However, some reports state the LaWS weapon is undergoing field tests on the Ponce.

The Navy did not respond to our request to comment for this story.

The LaWS weapon was temporarily installed in 2012 on the guided-missile destroyer USS Dewey for tests against various targets.

LaWS is built from commercial fiber solid-state lasers strung together, controlled and directed onto targets by an MK 15 Phalanx Close-In Weapon System (CIWS), according to the U.S. Naval Institute.

The Phalanx CIWS was designed and manufactured by defense contractor General Dynamics. It consists of a radar-guided 20mm Gatling gun mounted on a swiveling base, and is used on every class of surface combat ship by the Navy, as well as on some U.S. Coast Guard vessels. Phalanx CIWS units are nicknamed “R2-D2” because of their shape, which resembles the robot character in the Star Wars movies.

The LaWS prototype reportedly cost US$32 million to build, but the Navy claims the weapon is cost-effective because each shot of directed energy costs less than $1, compared to the hundreds of thousands of dollars it costs to fire a missile.

“That’s like saying it costs only $1 to do an MRI scan, so you should only be charged $1 when they scan you at the hospital,” said Allen Nogee, a senior analyst at Strategies Unlimited. “But that’s not the whole picture.”

The Good, The Bad and The Ugly of Laser Weapons

A working laser weapon “would turn the world upside down because you can kill the target at the speed of light,” Brad Curran, a senior industry analyst at Frost & Sullivan, told TechNewsWorld. “How are you going to defend against something that goes at the speed of light?”

A laser weapon can kill “every target except fighters and submarines,” and that would include satellites, Curran said. “The only defense is a swarming tactic, but the laser can engage first one target, then another and another.”

Mounting a laser on a ship “is a good application, because weight is not a problem and you have water on hand so you can cool the laser effectively,” Nogee told TechNewsWorld. “A ship is a natural home for this type of system.”

However, sand, dust and bad weather affect the weapon, Curran noted. Further, “we don’t know how powerful the lasers are, or how long they have to be held on the target to burn through them.”

Yet another problem is that lasers are not 100 percent efficient, so a lot of power will be wasted. “If you get 20 to 30 percent efficiency, you’re doing quite well,” Nogee said. “Sometimes just throwing a bomb at your enemy could be more effective.”

Nonetheless, the era of laser weapons is here, Curran emphasized. “They will totally change the face of warfare and, in the long run, they’re no more expensive than any other weapons system.”