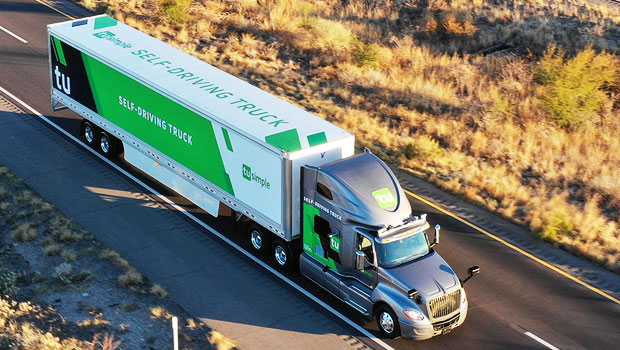 The U.S. Postal Service on Tuesday announced a pilot project using self-driving trucks. It will conduct the two-week experiment in collaboration with TuSimple, an autonomous driving technology company based in San Diego.

TuSimple’s contract with the postal service calls for one of the company’s self-driving trucks to make five round trips hauling USPS trailers between Dallas and Phoenix.

Although the truck’s operation will be automated, humans won’t be left out of the picture entirely. A safety engineer and driver will be aboard to monitor vehicle performance and maintain public safety.

Cargo will travel along the I-10, I-20 and I-30 corridor through Texas, Arizona and New Mexico, a route that accounts for about 60 percent of the total economic activity in the United States.

“You’re not going to see us on I-90,” he told TechNewsWorld. “We can handle high winds, darkness and rain, but we have not mastered snow yet.”

They Drive by Night

The pilot is just one of the many ways the postal service is innovating and investing in its future, according to a statement provided to TechNewsWorld by spokesperson Kim Frum.

“We are conducting research and testing as part of our efforts to operate a future class of vehicles which will incorporate new technology to accommodate a diverse mail mix, enhance safety, improve service, reduce emissions, and produce operational savings,” the USPS notes.

Long-haul routes with short turnaround times, such as the 22-hour journey in the pilot, are well suited for self-driving trucks, according to TuSimple.

“Right now, human drivers are constrained by 11 hours a day,” TuSimple’s Brown said. “We can stretch that out with these trucks.”

One of biggest challenges facing TuSimple now is finding teams to accompany its automated trucks. Overnight requirements and close quarters aren’t an attractive combination, especially in the middle of a truck driver shortage. The American Trucking Association estimates that shortage will reach 175,000 by 2024.

“Right now we have a truck driver on the left seat and a safety engineer riding right seat,” Brown explained. “Eventually we’ll be able to pull those folks out.”

No Sleep or Bathroom Breaks

“Unlike human drivers hauling freight across a region as large as the American Southwest, where this is being tested, computers don’t need sleep, or food, or bathroom breaks,” he told TechNewsWorld.

“There’s also legal limits on how much a commercial driver can drive in one day, which in modern 18-wheelers are enforced by computer and GPS tracking,” Yaverbaum said.

“Finding a way to move freight across state lines without those friction points is sort of the Holy Grail of logistics,” he added, “so we’re looking at both faster delivery and a higher-capacity pipeline, which means more freight delivered even more quickly — assuming this pilot program goes well.”

Safety is also a big benefit of self-driving vehicles, observed Sam Abuelsamid, a senior research analyst for Navigant Research, a market research and advisory company based in Boulder, Colorado.

“Automation doesn’t get fatigued or distracted,” he told TechNewsWorld.

In the near term, highway driving will be one of the main areas tackled by automation of heavy-duty vehicles, said Abuelsamid.

“However, these systems will likely still require human operators in urban areas,” he noted. “Automation could be triggered for a long highway run, and then a human driver may take over when the truck exits the highway to provide last-mile operation. Humans will likely remain involved loading and unloading and other functions at depots.”

At the moment, conditions favor labor in the trucking market. There’s a shortage of drivers and it’s growing. In this climate, self-driving trucks can fill the gaps created by those shortages. However, that won’t always be the case.

“As the efficiency and cost-effectiveness of autonomous vehicles begins to show itself, we can absolutely expect layoffs,” Ericho’s Yaverbaum said. They’re likely to occur “first, in response to new companies that use autonomous vehicles at the outset; and second, as companies become unable to compete while still providing their drivers with any benefits at all.”

The impact on jobs may not be too severe, though, suggested Navigant’s Abuelsamid .

“In local urban applications, the drivers may be displaced, but there will likely still be people on board for many years to handle the last 100-foot problem of actually delivering products to people’s doors,” he explained. “As e-commerce grows, the net job losses may end up being a wash.”

Meanwhile, the Partnership for Transportation Innovation & Opportunity, which focuses on the impact of autonomous vehicles on workers, voiced support for projects like the USPS-TuSimple pilot. Its members include the American Trucking Associations, Daimler, FedEx, Ford, Lyft, Toyota Motor North America, Uber and Waymo.

“PTIO fully supports collaboration between government and business, educators, and other stakeholders, in addressing key questions as we work to identify policies and programs that connect workers to expanding and new opportunities,” said Maureen Westphal, director of the organization.

Among those key questions: How will the introduction of autonomous vehicles impact the role of the worker? How will their roles stay the same? How will they evolve? What new career opportunities will be available?

“Through these focused efforts, we can ensure that workers are supported as our communities transition to an AV future,” Westphal told TechNewsWorld.

As beneficial as autonomous vehicles may prove to be, they’re also very vulnerable.

“Vandalism is a real threat. If malicious actors decide to spray paint or smash the sensors, it could easily disable automated vehicles,” Abuelsamid said.

“Cybersecurity is also a very real issue. Since automated vehicles will all be connected, there is always the potential that bad actors may find a way to attack either the vehicles or the corresponding data centers to cause issues either for monetary gain or to create havoc,” he pointed out.

“Luddites that decide to simply step out in front of AVs could also bring things to a halt,” Abuelsamid added, “although that’s something that can happen now with human-driven vehicles.”