WAN Optimization: Getting the Most Bang for the Buck

The importance of creating synergies between the deliverance of business-critical data over the wide area network (WAN) to support remote employees is increasingly important to business because more than half of the total workforce works outside the corporate headquarters’ structure.

According to Aberdeen’s February 2008 Benchmark report, “The Roadmap to the Next generation Branch Office Networks,” the number of end-user organizations expect the number to increase by 7 percent by the end of 2008.

These increases in remote employees, coupled with the fact that a survey of over 170 organizations between July and August 2008 revealed that 62 percent of the servers and 65 percent of enterprise applications have been centralized, shows the need to optimize these network systems. Aberdeen’s research has also found that the need to centralize and consolidate data storage stems from an organization’s average savings of 11 percent in operational costs.

As shown, corporate data is becoming increasingly centralized, and workforces are becoming increasingly remote, which is causing organizations to find a cost effective way to seamlessly deliver corporate data to their remote employees. Because of this duality, organizations are expecting bandwidth capacity to increase by an average of 108 percent over the next 12 months.

This increase is a must because, as one network architect from a financial services company put it, “Once you combine voice, video and data on the same network, the bandwidth consumption will explode. You need to have the right set of tools in place to ensure that your network will be able to handle that.”

Organizations are increasingly concerned about delivering rich content (video, Web 2.0, Java, etc.) to their remote employees, as these applications could drive significant increases in bandwidth consumption and cause issues with application protocols.

Best-in-Class organizations, on average, showed a 79 percent improvement in bandwidth utilization, improved average response times for business critical applications by 12.5 times, and had a 38 percent decrease in WAN latency.

The Impact of WAN Optimization Initiatives

Aberdeen’s June 2008 Benchmark Report, “Application Performance Management: The Lifecycle Approach Brings IT and Business Together,” reveals that 72 percent of network-related issues with application performance involve delivering corporate data over the WAN. Additionally, Aberdeen’s Benchmark Report from October of 2007, “Optimizing WAN for Application Acceleration,” revealed that 47 percent of organizations that conducted bandwidth updates of their WANs experienced no improvements in application performance.

Organizations are realizing that increasing bandwidth capacity is not necessarily the most effective solution for dealing with issues with application performance over the WAN, and they are looking to significantly increase their spending on WAN optimization and application delivery solutions over the next 12 months.

Aberdeen’s research shows that the top pressures driving the adoption of WAN optimization and application delivery solutions are the following:

Figure 1 shows that interdependencies between applications on the network and applications, and the network itself, are the top obstacles for delivering corporate data over the WAN. 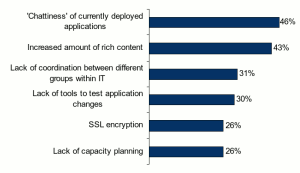 The Importance of Building a Business Case

Aberdeen’s June 2008 Benchmark Report, “Application Performance: The Lifecycle Approach Brings IT and Business Together,” found that issues with application performance could impact overall revenues by up to 9 percent.

While organizations could experience significant business benefits from infrastructure projects such as data center consolidation, server virtualization and VoIP (voice over Internet protocol) deployments, it should be noted these initiatives could pose some additional challenges for delivering corporate data to remote users because of the inability to create a business case, as revealed in Aberdeen’s February 2008 Benchmark Report, The Roadmap to the Next Generation Branch Office Networks. In order to create a business case for WAN optimization initiatives, organizations need to assess the impact of performance issues on their business processes.

“With respect to network performance and troubleshooting, I would recommend the selection of one of the tools that provides visibility of traffic by protocol and by well known application,” said a network manager for a professional services company as part of the Aberdeen survey. “The best tool is one that will graphically indicate transaction times divided into network time, platform (server) time, and application time. If such a tool is adopted by the support teams responsible for these different areas, incident and problem related downtime can be reduced. Such tools are, of course, expensive. A business case needs to be built.”

Organizations are becoming increasingly concerned about the impact that VoIP deployments, virtualization, data center consolidation and business continuity and disaster recovery initiatives are having on performance of their WAN. As compared to what was reported in 2007, organizations are still seeing VoIP deployments as the top concern in ensuring optimal performance of other business-critical applications over the WAN. With VoIP being bandwidth-intensive and time-sensitive technology, these deployments are causing additional challenges with prioritizing network traffic and effectively assigning classes-of-service to other applications that are running on the network.

Additionally, Aberdeen’s research shows a 75 percent increase in number of organizations that are concerned about the impact of server and desktop virtualization projects on the performance of their business-critical applications. This increase that occurred over the period of 11 months also shows that some of the WAN optimization and application delivery solutions that organizations are currently using are not effectively addressing this issue, and organizations are looking to deploy solutions that would include features and functionalities that would be specific to optimizing application performance while conducting virtualization projects.

Aberdeen’s June 2008 Benchmark Report, “Application Performance Management, The Lifecycle Approach Brings IT and Business Together,” found that organizations could lose up to US$117 million due to issues with application performance. The report also revealed that 72 percent of network-related issues involve delivering corporate data over the WAN.

Organizations are realizing that issues with application performance have a strong impact on key business processes, but the majority of organizations find it difficult to quantify that impact and include in their ROI calculations when making purchasing decisions about solutions for optimizing application delivery over the WAN.

The good news is that more than a half of end-users in Aberdeen’s survey reported they are taking actions to evaluate the impact of application performance issues on business goals. In order to effectively complete that task, organizations needs to develop a set of capabilities to maximize utilization of their network and business resources.

As a result, these organizations were able to outperform their peers around achieving their common goals while spending slightly less on WAN optimization and application delivery solutions and bandwidth services.

Bojan Simic is a senior research analyst in network management at the Aberdeen Group. Andrew Stamer is an IT research associate.
Get Permission to License or Reproduce this Article