Was 2013 the Run-Up to Nineteen Eighty-Four?

As we approach the end of the year, it is time to look back on 2013 and consider what we’ve learned about technology and human nature. Both Apple and Dell were massively changed; HP, Yahoo and other companies were in various stages of being turned around; and Google went from a company that wanted our private information to one that wanted our jobs.

The U.S. government decided, through the NSA, that laws don’t apply to it. Those who brought this to our attention (Manning and Snowden) got bigger punishments than the folks in government breaking the law. In 2013, the U.S. government became the least productive in history, with its biggest accomplishment shutting itself down.

Rather than ranting about all the screwups, I’ll focus instead on lessons learned.

I’ll close with my product of the week: a new blended office smartphone headset from Plantronics that could be ideal for folks working from home.

We had great hopes for President Obama and technology, but they proved to be misplaced. What gave us these hopes was the brilliant way he used technology to win elections, but that brilliance didn’t translate into actually running the government.

His signature Affordable Healthcare program was crippled by the technology behind it; the NSA illegally used technology against U.S. citizens; and the data center at the core of the NSA mess kept crashing, which means its program wasn’t really working anyway.

The lessons learned are that if you have a fantastic team, keep it together and focus it on other critical pursuits. Make sure your internal information mechanisms are reporting to the office of the CEO effectively, so that the CEO is aware of problems and not constantly blindsided (Obama was unaware of both the Healthcare.gov and the NSA issues until too late).

Make sure there is a strong internal process for reporting bad activity so that employees don’t feel the need to go directly to Wikileaks.

As anticipated, Apple stock cratered this year largely because Steve Jobs was not effectively backfilled. This is a repetitive problem when an iconic CEO leaves a company, and it is adversely impacting Microsoft’s CEO search.

The board needs to fully analyze why a company is successful. As much as we talked about magic surrounding Apple’s success, it wasn’t magic — it was the result of a uniquely strong team that focused like a laser on margins and customer satisfaction. There are actually better ways to do much of what Apple did, but instead of using Jobs’ departure to improve Apple, the apparent inability to understand Apple’s success led the firm down what still appears to be a decline similar to the one that occurred the first time Jobs left.

This goes outside Apple, because if you truly understand why a company wins, then you can emulate it and create a much more successful firm yourself. I’m still bothered by the fact that both Bill Gates and Steve Jobs never would have been hired into Microsoft, Apple, or most other firms when they started their own companies.

The interesting thing to watch for next year is Lenovo’s experiment to use Ashton Kutcher as a Steve Jobs-like character. The guy has actually been rather astute with technology investments, and unlike the other celebrities I’ve seen in similar roles, he really has rolled up his sleeves and gotten into the development process. If this works, it’ll be one for the textbooks.

We also learned that the effectiveness of attack ads isn’t limited to politics. They work on vendors, too. Both Samsung and Microsoft attacked the view that iProducts were the ideal, and they did damage. Of the two firms, Samsung got the most benefit, but Surface 2 tablets have been selling out, of late, suggesting Microsoft is doing better as well.

Google showcased that it could pretty much do anything it wanted and get away with it. It survived stealing information from large numbers of people and even survived stealing from Apple. The NSA’s efforts overshadowed its own, though.

Google put self-driving cars on the road and didn’t get sued into next century (yet). Now it’s working on robots that would displace Google users’ jobs. I still think it has a death wish, but it is kind of amazing how hard it has to work to commit suicide. It will certainly change the world, in any case, and we should likely be prepared to bow to our coming Google masters.

I remain fascinated by the difference between Intel and Google, though. While Intel focuses on ensuring technology is used to benefit humans, Google appears to be on a hell-bent mission to see if Terminator actually will become real.

However, Google clearly showcased that when we called Microsoft “the Evil Empire,” we clearly didn’t have a clue. Where is Luke Skywalker when you need him?

Dell showcased that even a very large public company actually could go back to being private. The massive increase in pressure from stockholders that drive CEOs to do stupid things like Mark Hurd did at HP often have me questioning why firms go public in the first place.

Google has found a way to isolate itself from stockholder pressure for now, but I imagine most public company founders look back longingly to their private days when things were far simpler.

There was a path back for Dell, and painful as it was, it was also successful. I had a chance to talk to Michael Dell this month, and going private has both freed up more than a billion dollars in profit and removed the shackles that were constraining him.

He can now make big bets and seems much happier, and the Dell employees generally seem much happier as well. I’ll bet there are a ton of other CEOs who are now wondering if their lives and their firms’ profitability could be improved by similar moves.

Given the aggravation Carl Icahn is causing for Tim Cook, I’ll bet Tim wishes he could go private, even though he isn’t an Apple founder. If Jobs were still running Apple, I’d bet he would find a way to take the company private — or at least explore a path that would take it in Google’s more protected corporate direction.

Jobs really didn’t think much of most analysts, and having them in a position to tell him what to do likely drove him nuts.

Wrapping Up: An Interesting Year

There is a Chinese curse that translates into something like “may you be born in interesting times” that reflects the pain that comes with change. 2013 was an interesting year; we experienced a massive amount of change — some of it very good and some kind of scary.

Most troubling is the path we seem to be on to emulate the book Nineteen Eighty-Four, with either the U.S. government or Google as Big Brother. In that battle, I’d likely back Google, because at least it is competent — but it would be an ugly choice. Anyway, something to noodle on over the holidays. Have a Merry Christmas!

I’m a big fan of the Voyager Legend mobile phone headset. It is elegant and simple, and it has bidirectional noise cancellation, which makes both outgoing and incoming sound cleaner and easier to understand.

It sits comfortably behind the ear, and it has days of battery life. The problem is, I’m always having to switch between cellphone and desktop wireless headsets, which I find annoying.

Well the Voyager Legend CS fixes this. It bridges your desktop and mobile phone so you can use one headset to connect to both phones. 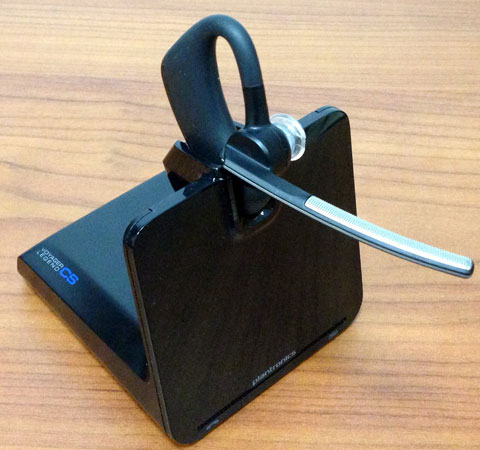 At some point, we’ll likely stop using regular office phones and live off our smartphones. I’ll bet BlackBerry figures this out first. Until then, the Voyager Legend is an excellent bridge, and that’s why it’s my product of the week.