Wearables Just Don’t Do It for Nike 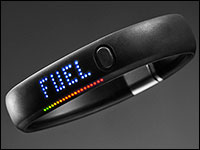 Nike appears to be retreating from its vanguard position in the computer wearables market.

The company has begun slashing the engineers working on its FuelBand product, a fitness computer that can be worn on a wrist, based on reports that surfaced late last week.

As many as 55 of the 70-person team working on FuelBand were laid off on Thursday, according to CNET.

However, Nike subsequently insisted the FuelBand was still an important part of its business, Re/code reported, telling the publication that it would continue to improve the product, offer it in new colors, and sell and support it for the foreseeable future.

Nike did not respond to our request for comment for this story.

Nike intends to “leverage partnerships” to expand its product and service offerings, it also told Re/code, which could be code for a retreat from developing wearable technology.

“It implies that they would rather have a technology company develop the technology, and Nike can do what it does well, which is create products that are going to appeal to consumers in the sport clothing domain,” Roger L. Kay, president of Endpoint Technologies Associates, told TechNewsWorld.

Nike may just be realizing that developing and sustaining a technology product is too far removed from the company’s core business.

“If the technology market didn’t move so fast, it might not be a problem for Nike, but it could put together a product that worked fine now, but within six months it would be out of date and they’d have to come up with another one, and that team they had aboard may not be capable of moving that fast,” Kay said.

That certainly seems to be the case with the FuelBand. Introduced in 2012, it has remained largely unchanged except for the addition of Bluetooth and new colors last fall.

Moreover, the FuelBand has remained an Apple-only device, which ignores the majority of mobile phone users who have Android phones.

Nike’s strategy could be influenced by Apple CEO Tim Cook.

“With Tim Cook as a member of Nike’s board, it may have seen a reason to withdraw from the device space and build on others’ products,” Ross Rubin, principal analyst with Reticle Research, told TechNewsWorld.

Apart from the influence Apple’s CEO may have had on Nike’s decision, there were plenty of reasons for the company to reassess its wearable strategy.

Deliberations have been going on for months over what to do with the FuelBand business because the devices are expensive to make, have low margins and are hard to manufacture, Re/code reported, citing anonymous sources.

What’s more, Nike, which does not have a reputation as a technology company, was having trouble attracting talent to the business. In fact, FuelBand’s design director was poached by Apple to work on its wearable technology.

However, Nike’s retreat from wearables won’t hurt the market for the devices.

“It’s not a bad omen for the potential of wearables,” Rubin said. “It represents Nike’s belief that it didn’t have a strong future as a device maker in wearables.”

“The market will double this year. The momentum is still there.” said NPD Group analyst Ben Arnold.

“I don’t view Nike’s news as something that suggests the wearables market is in decline — I view it as a strategy move by Nike,” he told TechNewsWorld.

“Nike will reemerge in the market somewhere else,” he added. “Maybe it will be as the software basis of someone else’s device. There’s more to this story than Nike getting out of the market.”