What if EMC’s Joe Tucci Were US President?

I’ve been noodling on this question ever since I attended an EMC analyst event last month and was astounded by the number of analysts who wanted its CEO to run for office. They started with president but seemed to feel no matter where he ended up in government, he would make things better.

Joe Tucci is one of the few statesman CEOs and has a rather unique skill set, almost secretly creating a very unique entity in EMC with not only a novel organizational structure for technology, but also an almost unreasonable focus on customers and partners.

At a time when confidence in all branches of government is at historic lows and partner countries are wondering if the U.S. is their enemy, someone who would focus on building government and partner confidence seems ideal. It won’t happen — but it’s worthwhile to explore the hypothetical of what someone like Tucci, with a greater focus on doing what’s right, could mean for the U.S. or any country.

I’ll close with my product of the week: the refreshed XPS 12 with Intel’s Haswell processor, which I’m using to write this column.

The US Government’s Core Problem

It isn’t Obamacare, gay marriage, guns or abortion — these are just sideshows that tend to cover up the fact that the U.S. is dysfunctional in large part because too many folks in government lack the competence to do their jobs. While there is always going to be some incompetence in any large, complex entity, the level of incompetence among U.S. elected officials is unprecedented — and it seems to cover all branches of government.

This isn’t one party or the other — this is both parties. The Democrats drove through a healthcare program that is excessively complex, unaffordable, and so badly executed it is an embarrassment. The Republicans thought it would be a great idea to shoot down government, in effect making things vastly worse, in order to stop it with no real interest in fixing the program, which does address a clear national need.

The judicial branch appears to be made up largely of folks who are so disconnected from today’s realities that they form the best example to illustrate why mandatory retirement is a good idea in most industries, and the executive branch is run by a guy who clearly lacks the skills to manage anything at this scale and doesn’t seem to want to hire anyone who does.

We are constantly reminded that the administration is either incompetent or crooked. For instance, the latest NSA scandal — spying on allies — was presented as something the president didn’t know about. Given that Obama micromanages drone strikes, this seems unbelievable unless his staff believes him to be incompetent. That’s binary: His administration is either lying or lacks competence, and the practice alone is incredibly stupid.

So, to fix the core problem, which is one of competence and focus, what is needed is someone who isn’t necessarily right or left, but who is basically competent and will use a unique brand of innovation and creativity to fix problems rather than to create new ones.

EMC is a very unique entity, and it is the brainchild of its CEO. Each unit is uniquely designed to serve a targeted customer and perform a specific function. For instance, VCE is a funded partnership with Cisco, Intel, and VMware to create large scale integrated systems for the biggest of companies; Pivotal is a partnership with GE to create enterprise software that both fixes GE’s problems and can be sold to other large firms in GE’s class. Both entities are unique in the market and represent an innovative approach to organizational structure.

Tucci implemented analytics programs to understand not only what customers wanted and weren’t getting, but also what they were going to need in the future. He then took this to partners and created one of the most powerful partner programs I’ve ever seen, because he focused on ensuring their success and, by proxy, his own. It wasn’t a “them or us” project, which seems to be at the core of any political engagement — its focus was on making the partnership successful.

Even in product terms, EMC has executed some interesting approaches. For instance, there is a lot of tension between public and private cloud, and EMC is the only vendor that decided to try to combine the advantages in both, an offering called “Project Nile.” Given U.S. healthcare costs rank as the highest in the world, it is likely that focusing first on getting those costs down could result in a program of affordable healthcare that would reduce government costs, making both sides happy.

At the core of Tucci’s success is a concept that I first ran into at Intel, called “disagree and execute.” It promotes argument, but it also ensures that once a decision is made, people get on board. This occurs regularly at EMC, because the entities are very different. For instance, at VCE Cisco and VMware were at odds over software-defined networks, but the decision was made to go with Cisco. VCE is executing with VMware’s team on board — they’re not happy, but they aren’t shutting down VCE either.

Wrapping Up: Joe Tucci for President?

Tucci isn’t going to run for U.S. president, and I know full well that if he did and was elected, almost all career politicians would put Tucci in their crosshairs and try to ensure his failure. That’s unfortunately true of anyone who comes into government from business, no matter how skilled. In fact, the more skilled they are, the more at risk they likely will be, because the politicians will see them as a threat to the status quo.

That said, Tucci could be used to supplement a politician who isn’t skilled to ensure the job gets done. Tucci is more interested in getting the job done then in getting credit, which might be suicidal as a politician but would be ideal in a political aide or advisor.

In fact, you may not want Tucci as president. Instead of having him focus on political intrigue, it would be of greater value to have him — or someone with his skills — focus on getting the job done. Lord knows, we need someone in government with the skills and focus both to know what the job is and to get it done. Just saying…

Product of the Week: Haswell XPS 12

What a difference a chip makes. I’ve been using an XPS 12 for more than a year, and it is a good box. However, the battery life on the first set of Windows 8 hybrids sucked, and the first generation XPS 12 was not an exception.

“Haswell,” the code name for Intel’s latest Core processor, provided a massive increase — nearly double — in battery life, and that is why products in the Ultrabook class suddenly have great battery life. 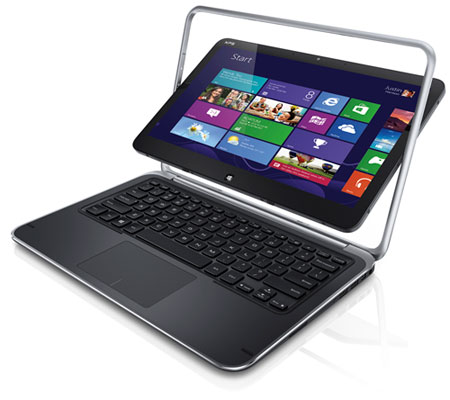 This jump makes all the difference in the world, and for about the cost of a MacBook Air, the XPS 12 is a true hybrid with both tablet and laptop features: lighted keyboard, full set of ports, carbon fiber finish, and a wonderful flip screen. It isn’t the cheapest Ultrabook in the market, but it is one of the best, and with Haswell it just became a ton better.

I’ve been very skeptical that an Ultrabook could really approach a tablet’s battery life and utility, and while I still use the XPS 12 mostly as a laptop, it is far closer in this current iteration than I would have thought possible a few years back. As a result, the Dell XPS 12 with Haswell is my product of the week.