What If Steve Jobs Had Introduced the Zune?

Over the years, I’ve had long “discussions” with Apple fans on why Apple can’t actually put Microsoft out of business. Many seem to think the event is imminent, while I clearly believe it is impossible. To make a point like this, however, you need a reverse example, and the new Zune is likely the best product for the purpose. By all measures, it is a better media player than Apple has ever produced, but with Apple as dominant as it is in this area, there is virtually no chance that Microsoft will displace it. In this market, the seats are reversed — but the rule still holds. To take out a dominant vendor, building a better product simply won’t get the job done.

I’ll expand that argument and close with my product of the week: the most affordable Ferrari Notebook ever produced.

A World of Difference

There are two parts to owning a market: one is the physical market share, and the other is mindshare. The dominant vendor defines the product class, and challengers are measured against it. So, pretend for a moment that at the latest Apple event, Steve Jobs announced the new Zune, and Bill Gates came back to announce the new nano.

A media player is first and foremost a media player, so you can imagine Steve going on about how the Zune has the best screen in the segment. You can see him pointing out how Apple focused on making the music experience better by improving the audio system and how, for those who really love music, FM HD is the only way to go — and why he waited until he could get that before putting FM into any product.

You can almost hear his voice pointing out that he put a high-end graphics (Nvidia Tegra) system in the Zune similar to that of the entire Mac line because, what is video if it isn’t fantastic? You can picture him going on about the subscription service and making the point that only his device plays regular MP3s, works with ripped songs and has a subscription service — making it the most capable of the music players. Finally, he points out that the product’s UI is both simple and elegant.

Ever the competitor, you can picture him making fun of Microsoft for putting a camera into the Microsoft nano because, OMG, isn’t the camera market completely different? He’d likely go on about the fact he has worked with really good cameras, he knows a lot of photographers who use really good cameras, and that the Nano, sir, is no good camera (nice reuse of a classic political comeback).

How about that FM radio, he would probably wonder aloud? Why would Microsoft ever put standard definition audio into an otherwise nice product? I mean, OMG, don’t they get it’s the sound of music that’s important?

And games. The nano is stuck with a few lame things, while the Apple Zune has games that come from the same folks who build them for friggin game consoles. Now those are games, They are PSP level games — something Microsoft simply doesn’t seem to get with its lame nano.

He’d probably close with some statement to the effect that Apple built the best damn portable media player ever, while Microsoft built a bad cross between a geriatric Flip and a Zune wannabe.

But Steve Jobs didn’t announce the Zune — he announced the nano, and that makes all the difference in the world.

Due to its incredible dominance, Apple — which has its customers locked into its technology through a variety of means — can dictate the ideal product requirements. Right now, they include iTunes, an App Store with lots of applications, a camera, connectivity to iPod accessories, and, to be honest, a little picture of an Apple on the back of every product.

It doesn’t really matter how good the Zune (see a great summary of new Zune reviews here) or any other non-iPod is. At the end of the day, no matter how good it is, it won’t be an iPod — and being an iPod is currently a market requirement.

If Microsoft had simply built a better version of 1-2-3 without first embracing the dominant product, it would have ended up like Apple, with a niche position in the market. That position is likely to remain the same unless Apple first embraces Windows.

Zune will suffer the same fate for the very same reasons. It is arguably a better product than the touch, but if you own an iPod, you simply will not consider the Zune a viable alternative — and that effectively locks Microsoft out.

It’s interesting to note that starting with Jaguar, which arguably has better active directory support than the consumer versions of Windows, and ending with Snow Leopard, which got Exchange support, Apple has been quietly embracing Windows. That may help (I did say help) explain why it has been able to grow from 3 percent to nearly 10 percent over the last decade and has nearly 70 percent of the premium consumer PC market today.

Apple may not be able to take the market away from Microsoft at the moment, but it is taking an impressive percentage of the high-margin customers by increasingly and quietly embracing Windows.

For anyone not tied to the hip to Apple’s dominant iPod, the Zune is a better media player — if you define “media players” as things that play media (which I kind of do). If you define them as the bastard child of an iPod and the first Flip, then the Zune isn’t even in the running.

Strangely enough, with that definition, neither are most iPods. And since Apple defines this market, well, the Zune is kind of screwed. Now, if Microsoft had just built a product like this new Zune the first time around… . (I still remember the first time I saw the first-generation Zune presented by the soon-to-be-fired Microsoft exec. After I told him the product sucked, he said, “Well, it takes us three times to get it right.” Indeed.) For jollies, here is a chart on Apple’s market valuation with commentary on Microsoft’s.

Product of the Week: Acer Ferrari One

I love the Ferrari notebooks, and I’ve had three of them over the last few years. Not very practical, but relatively fast — and they never fail to get a lot of attention.

The new Acer Ferrari One may be the most desirable of the netbook class, primarily because it isn’t really a netbook in anything but its small, portable size and, surprisingly, its price. 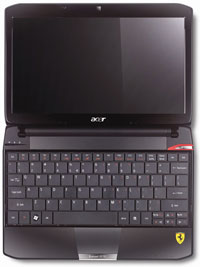 Let’s start with that as this product has a target price below US$730, according to some sites, depending on configuration. (Acer told me it would be around $500, but I can’t believe they will sell it that cheap.)

You can add a WAN 3G card for wireless connectivity if the Draft-n WiFi built into the product isn’t enough.

This will be a screaming, small, distinctive Windows 7 box.

It has an 11.6-inch screen, a rare and unique XGP expansion port for high-end desktop graphics, and an almost full-sized keyboard with a multitouch touchpad (like Apple offers in its MacBooks, costing twice as much).

Like the majority of products launching over the next few weeks, this product won’t be available in stores until October 22.

At $1,500 to $2,000, the old, big Ferrari notebooks were an incredible bargain if you considered the value of the Ferrari brand and the exclusivity that came with it. At well below $1,000, a product like this would be a steal.

A steal is a natural for product of the week, and the Acer Ferrari One — which I saw two weeks ago in person — makes the grade.