What Lies Beneath the Surface Tablet’s Screen 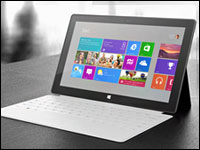 The last thing people probably consider when buying a new gizmo or gadget is how hard it might be to fix, but according to the teardown team at iFixit, Microsoft’s shiny new Surface tablet is easier to repair than the latest iPad, but it is still difficult to take apart.

After removing a total of 17 T5 Torx screws — 10 under the kickstand and 7 under the camera cover — the rear case comes right off — almost. (Credit: iFixit)
(click image to enlarge)

The online teardown site rated the Surface’s “repairability” a 4 on a scale of 1 to 10, with 10 being the easiest. That is a marked improvement over the iPad’s 2 rating, but far short of the Amazon Kindle Fire’s 8.

Getting inside the device was where the Surface scored over the iPad.

“Microsoft made the Surface’s internals accessible through the back — like the Kindle Fire and Nexus 7 — as opposed to through the front glass/LCD — like the iPad 3,” said Miroslav Djuric, chief information architect at iFixit.

“Aside from the original iPad’s clip system — which allowed the user to open the tablet without having to use a heat gun to unglue the glass — making the tablet guts accessible from the rear panel usually makes for an easier opening procedure,” he explained.

“The Surface falls somewhere in the middle: Users won’t have to risk shattering the glass to open it, but they’ll have to carefully remove a long, plastic bezel, a tamper-evident sticker, and tons of screws to do anything inside,” Djuric told TechNewsWorld. “Thankfully, the battery replacement is quite easy once you’re inside. The user just needs to disconnect a ribbon cable and carefully pry the battery off the rear case in order to remove it.”

Adventures Through the Tablet Glass

After getting into the device, however, the would-be repairer would still have a ways to go to make those repairs.

“The glass and LCD, which will undoubtedly be the most-broken part of the tablet, is strongly adhered to the VaporMG frame, requiring lots of guitar picks, patience, and heat gun action in order to separate,” said Djuric. “It also doesn’t help that all of the Surface’s other guts are placed on top of the glass/LCD/Vapor MG frame, but that’s the usual trade-off with having a tablet accessible from the rear.”

This also isn’t really all that unexpected. The devices aren’t made, as is still the case with desktop computers, to be upgraded or even repaired by the end user. These are devices — much like a television — that should be left to the professional to service.

“The more integrated a design is, the harder it is to pull apart,” said Roger L. Kay, principal analyst at Endpoint Technologies Associates. “A removable battery takes up more space than a hard-wired one. But then there’s just plain old good design. Some are better than others.”

One of the reasons that these devices are difficult to repair comes down to consumers often wanting devices that are sleek and lightweight, while still being reliable. It is thus difficult to produce a product that fits all the criteria and can also be easily repaired.

“Consumers consistently are pushing manufacturers toward lighter, sleeker and more portable devices,” said Chris Silva, industry analyst at the Altimeter Group. “We’ve seen with things like iPhone and Macbooks, the more the manufacturers do to make these items sleek and lightweight, the less user-serviceable they are.”

That, plus the accelerating pace of innovation among these devices, adds up to a dire electronics-waste impact on the environment, Silva told TechNewsWorld.

“While feature phone innovation did not have as high a correlation to handset replacement every 18-24 months, on the smartphone front devices innovate so fast that users are swapping out devices at least that fast, if not more quickly. Tablets innovate even more rapidly, meaning that the ability to fix one of these devices is less important than our likelihood as consumers to attempt to repair vs. upgrade these items.”

In the case of the Surface, this could be a reflection of Microsoft’s newness to hardware in this class of products, but it also comes back to the cost to repair vs. the cost to simply replace.

“Their prior experience was the Xbox, which was generally just cheaper to replace, even though it was repairable,” said Rob Enderle, principal analyst at the Enderle Group. “As you get to (US)$1,000, it makes more sense to design a product to repair, but as you get to $500, the added cost to make a product easy to repair starts to exceed the benefit.”

With the Surface, very little should go wrong — but if anything were to break, it likely wouldn’t be something that an average user could readily fix, so it falls into the replace category.

“This is a solid state device, and the kinds of things that fail on this class of device are generally due to misuse and not because the part itself fails,” Enderle told TechNewsWorld. “If the user mistreats the device, the warranty doesn’t cover the repair, and if a component fails because it is bad, that cost is passed back to the component supplier.”

The issue with the difficulty of repairing is that clearly the companies see this as something that could, or even should be replaced rather than repaired. In these cases, the efficiency of manufacture means that repairing something that has a seemingly minor fault requires major effort. The question is whether consumers should consider this when buying such a product.

“There are lots of different e-recyclers out there,” noted Djuric. “Some strip devices to their most basic materials, different metals, plastics, etc., while others refurbish a portion of their devices and make them sellable again.”

The overarching problem is how to separate all the parts in an electronic device cost-effectively, Djuric stressed.

“Increasing the difficulty of separating the components hurts the e-recyclers’ bottom line, and makes some devices cost-infeasible to refurbish,” he said. “Those devices will eventually end up in a pile of raw materials — at best — instead of being used elsewhere by another person who can’t afford the latest-and-greatest gadget.”