What Trump Should Do With Air Force One

I’m starting to get the idea that for the next eight or so years, a lot of what many of us are going to write will have something to do with what Donald Trump tweeted. Granted, since that has been the case for much of the last year, we have gotten comfortable with it.

However, when Trump said he would kill the deal for an updated Air Force One — which would cost billions and still be based on the now-obsolete 747 — it hit me that we’ve completely lost track of what Air Force One should be. It should be a physical representation of the United States’ capability as it exists today — not a homage to the Ronald Reagan White House, which first introduced the 747 as the plane of presidents.

I’ll share my thoughts on why the next Air Force One should showcase innovation, agility and technology, rather than how the U.S. can’t spend taxpayer money wisely, and how incredibly long it takes the U.S. bureaucracy to get anything done. I’ll close with my product of the week, the Lenovo Book, which is likely the most innovative laptop in the world. It’s an innovation showcase itself and breaks the mold on notebook design.

Air Force One today is a bit of a disappointment. Donald Trump’s own plane is more distinctive, more advanced, more efficient, and likely far more comfortable to fly in. It’s newer, so it likely is also a better representation of what the U.S. can do than the official presidential plane.

The plane is hardened against nuclear attack — something very likely in Reagan’s time but not at all very likely now — but it is not hardened well against cyberattack. Given that it uses really old tech, that currently may not be a huge problem.

When it was created, it needed to defend against a variety of state-based attacks, because small groups couldn’t afford jet fighters or good ground-to-air missiles. Now it needs to defend against weaponized drones and lots of relatively current generation U.S. ordnance that has found its way into the hands of relatively small and independent anti-U.S. Organizations, thanks to the mess the Middle East has become.

Back in Reagan’s time, there was a relatively low likelihood that an airport rapidly could fall to a hostile mob, blocking and holding a plane and its occupants hostage. Now, with social media, huge numbers of people can be mobilized very quickly, both domestically and abroad. The president-elect has a tendency to offend large numbers of people, suddenly making such an event almost certain. This means the plane needs capabilities like vertical take-off and landing, so it can get out of Dodge even if the runway is compromised.

Add this up, and the result is that a big, slow-moving, largely obsolete plane would seem to be the last kind of plane you’d want to give a current-generation president. The 747 was advanced in the 1960s, and the new plane is expected to remain in service till the 2050s. Can you imagine even flying yourself in a plane with technology 90 years old, let alone putting the most powerful leader in the world in one?

What Air Force One Should Be

Air Force One should be a symbol of U.S. capability. Rather than lagging the U.S. aerospace industry by more than 50 years, it should lead it — or at least be up to date. In effect, it is the flying brand for the company, and it currently can’t even drop off the president without help, which China showcased by embarrassing President Obama a few weeks back.

It should be designed to protect the president from today’s threats, not the threats of the cold war. It needs to be fast, agile, and better able to elude attacks than anything conceived 50 years ago. It needs to be a showcase for U.S. technology that helps sell the idea of buying from the U.S. In other words, rather than using a largely obsolete airframe, it should use one that a U.S. plane builder would be proud to sell — more a flagship product and less an obsolete one.

Aerospace companies should compete to build the plane, and at least create the possibility of someone providing it for free or below cost just for the related publicity, rather than running up massive bills retrofitting an ancient design. Wouldn’t it be great if companies like SpaceX were bidding for the new plane rather than just Boeing and Airbus? (And why would we even consider a European company to build the president’s plane?)

Given how rapidly technology is changing, the plan to a design that is 50 years old, take more than a decade to build the plane, and then keep the design in place for 25 years is just insane. We should start with military specification that is designed to deploy in 2025 and expected to have a service life of something closer to a decade.

The world is changing too quickly, and the loss of a president would be so disruptive we should place protecting against it as a vastly higher priority than we clearly do. (I still can’t get over putting the leader of the free world in a plane that was designed in the 1960s). So, the plane not only should start out being more current — so it is designed to defend against the threats we will have in 2025 rather than the threats we had in the 1970s — but also should be replaced more aggressively.

It should be a showcase for military technology that speaks to the need to put forces quickly anywhere in the world. For instance, if there were another Benghazi, a plane like that could get a defensive force to an embassy in minutes rather than days.

Wrapping Up: A Showcase for the US

In the end, I agree that the current plan for Air Force One is stupid. The plane was outdated last century, and it doesn’t address the threats and needs of today — let alone the ones in 2025, when it will be deployed. Also, its expense is insane.

Instead, it should be a forward-looking design that is a showcase for U.S. technology (which could help drive U.S. plane sales). It should be based on a military plane designed for current threats — not a vulnerable civilian design.

In short, the next time a foreign government decides not to provide a stairway for the plane, it would be incredibly cool for its officials to be left standing while the plane flew right to the venue and dropped off the president at the front door.

I was trying to think of a tech product that would go with this column, something that was forward-looking, something that rethought an aging design, and something representative of what the leader of the free world might be proud to carry. What came to mind was the Lenovo Yoga Book. 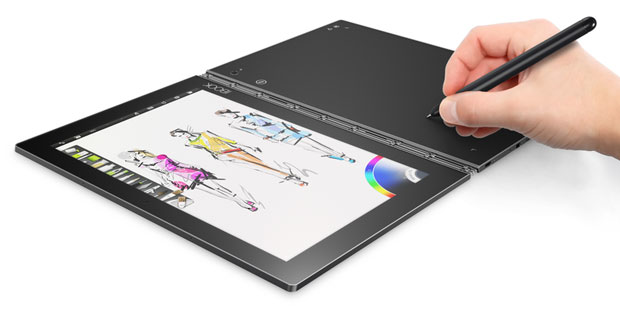 This 2-in-1 computer represents more of what I think the iPad Pro should have been, in that it morphs from notebook to tablet form factor more elegantly. It has a tablet size and weight, and it has a tablet battery life, but it still runs a full desktop operating system rather than a mobile phone OS.

It anticipates the ARM-based Windows products next year, so it is forward-looking rather than based on designs of the past. It has what is basically a large touchpad for a keyboard, coupled with a touchscreen, so it is perfect for the Windows 10 Creators Update, because it is perfect for those who like to draw. In fact, people who like to draw rave about this thing because you can use a stylus on the keyboard and see the result unobstructed on the screen in real time (check out this video).

My mother was an artist, and were she still alive, she would have loved this thing (the art gene didn’t pass to me, unfortunately). I should point out that this product seems to work best with those who grew up with smartphones and screen keyboards. It takes us older folks a bit longer to get used to keys that don’t move.

At US$550 for Windows, it doesn’t break the bank, and the product is gorgeous with the signature Lenovo watch band hinge. (There is an Android version, but that really doesn’t make much sense for a notebook configuration, given that Google likes Chrome for notebooks.)

Because this thing is sexy, thin, light, has great battery life, and represents more of the future of notebooks than the past — and also because my mother would have loved this for Christmas — the Lenovo Yoga Book is my product of the week.