Who Will Win the 4G Race?

Many entities have used the term “4G” to refer to a next-generation technology that delivers much better performance than the current 3G standards. For example, Sprint is referring to its planned Mobile WiMax launch as a “4G” deployment.

The truth is, unlike 3G, which is clearly defined in IMT-2000 (International Mobile Telecommunications 2000), no standard body has yet to offer a clear definition of what comprises 4G. IMT-Advanced is the closest thing we could find that offers a glimpse of the requirement of a 4G network. IMT-Advanced is defined as the following:

“Systems beyond IMT-2000, for which there may be a need for a new wireless access technology to be developed around the year 2010, capable of supporting high data rates with high mobility. High mobility here covers high speed on highways or fast trains (60 kilometers/hour to 250 km/h, or more). It is predicted that potential new radio interfaces will need to support data rates of up to approximately 100 Mbps (megabits per second) for high mobility such as mobile access and up to approximately 1 Gbps (gigabit per second) for low mobility such as nomadic/local wireless access, by around the year 2010.”

In addition, it should have the following characteristics:

From our perspective, unlike 1G, 2G and 3G, 4G will not be about air interface technologies. On the contrary, 4G will be agnostic to the types of underlying air interfaces. Although, in order to support the targeted throughput as outlined by the ITU (International Telecommunication Union), it is likely to be based on OFDMA (Orthogonal Frequency Division Multiple Access) modulation with MIMO (multiple input, multiple output) and other smart antenna enhancements. 4G is a vision of an all-IP based, heterogeneous mobile broadband network that supports multiple air interfaces, converged fixed-mobile networks, and multiple device form factors and provides consumers with an always-best-connected, low latency, high QoS (quality of service) broadband experience.

The Path to 4G

Although WiMax supporters claim that 4G is WiMax, we believe this is a wrongful assertion. Future versions of WiMax may become potential 4G candidates, and OFDM (Orthogonal Frequency Division Multiplexing) modulation will be a key component of 4G, but 4G is definitely not WiMax. WiMax has served as a catalyst for 3GPP (Third Generation Partnership Project) and 3GPP2 to accelerate their next round of innovation, adopting OFDM modulation and implementing MIMO and other smart antenna technologies. Both camps have clearly defined their paths toward 4G. 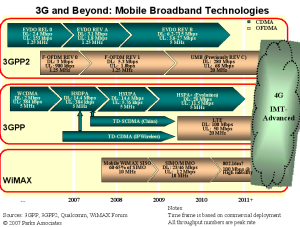 The WiMax supporters advertise several advantages, including cost, time-to-market and a strong ecosystem. With Mobile WiMax being commercialized in 2007, it does seem to have a time-to-market advantage over LTE (Long Term Evolution) and UMB (Ultra Mobile Broadband). However, the first generation of mobile WiMax technologies, without MIMO enhancements, will not be able to deliver significantly higher throughput than 3.5G technologies such as HSDPA (High-Speed Downlink Packet Access), which has already been deployed commercially.

The cost advantages advertised by WiMax vendors have yet to be proven in a commercial network rollout. Sprint claims that Mobile WiMax will deliver a cost-per-bit performance of 10 times EVDO (Evolution-Data Optimized), but a lot of the gain will come from the broader spectrum band used by Mobile WiMax. Mobile WiMax has better spectral efficiency but is likely to deliver a smaller coverage area, possibly at only half to one-quarter the cell radius of an equivalent HSPA (High-Speed Packet Access) cell. According to technology experts, CAPEX (capital expenditure) for current WiMax technology can be up to five to 10 times that of HSDPA CAPEX on a like-for-like basis. The initial results from SKT and KT’s commercial network in South Korea, albeit a relatively small-scale rollout, do not support either the cost or performance claims made by WiMax supporters. Samsung representative Kiho Kim presented field test results in Seoul with Korea Telecom on WiBro, and he showed that the sector capacity for real-world WiBro deployment was 2.8 Mbps on downlink and 1 Mbps on uplink.

WiMax will improve over time, but 3GPP and 3GPP2 technologies are also evolving to support higher throughput, lower latency and better economics by leveraging MIMO and other smart antenna technologies, wider spectrum bands and eventually OFDM modulation. In terms of ecosystem, 3GPP and 3GPP2 still enjoy stronger support from technology companies, and they are already being integrated into laptops and other embedded devices.

Some WiMax vendors compare Mobile WiMax with HSDPA and EVDO Rev. A, but such a comparison can be unfair. The comparison may make sense for new market entrants who do not have an existing wireless network, but not for most of the existing cellular carriers. The migrations from WCDMA to HSDPA and EVDO to EVDO Rev. A are quite smooth and cost-effective, and service providers do not need to build a new network. To upgrade from a WCDMA network to an HSPA network, the additional CAPEX will be less than 10 percent of the deployment cost for the 3G network.

Most service providers will continue to invest in 3G and 3.5G networks to deliver better voice and data services. They have yet to recoup their 3G investments and are not yet convinced that consumer demand exists for unlimited mobile broadband access in the near term. Both 3GPP and 3GPP2 are planning to provide continuous enhancements for HSPA and EVDO to deliver higher bandwidth and better economics. Many service providers may indeed choose such a migration instead of building a new parallel network.

Both 3GPP and 3GPP2 will eventually switch to OFDMA-based technologies such as LTE and UMB. Mobile WiMax will be competing against these two technologies, and it does have a time-to-market advantage in terms of standards and commercial availability. However, most service providers are not ready to deploy mobile broadband yet, and as a result the time advantage is mitigated. Even if they do eventually decide to build out a parallel mobile broadband network to support data demand in densely populated markets, they may still choose LTE over Mobile WiMax. According to 3G Americas, several technology vendors have announced plans to make their current infrastructure reusable for Long Term Evolution, for example, by introducing new modules that can be integrated into the existing base stations. These future network infrastructure architectures will find their way into the market around 2008 or 2009.

Most of the service providers that have IMT-2000 spectrum bands are likely to adopt HSPA and eventually LTE technologies. Faithful CDMA carriers like Verizon Wireless will also follow the 3GPP2 migration path, although it is unclear which OFDMA technology they will choose in the future. Either way, Qualcomm will survive with its technology portfolio and strong expertise in multi-mode network and devices.

Mobile WiMax is likely to have the most success among new market entrants looking to enter the market in the near term, such as landline operators seeking to include mobility in their service bundles. The potential of such markets should not be underestimated. Parks Associates forecasts more than 80 million subscribers worldwide will be using mobile WiMax by 2012.

Another key question is whether there is significant demand among the vendors’ existing and potential customers for building a new overlay WiMax network. For those who do not have a strong position in 3G, WiMax can be used as an entry point to gain higher share in the overall wireless market. For those dominant in 3GPP, such as Ericsson, the best strategy might be focusing on further enhancing HSDPA technologies and in the meantime investing heavily in LTE, multi-mode support, and LTE/HSDPA network integration.

Yuanzhe (Michael) Cai is director of broadband and gaming for Parks Associates.
Get Permission to License or Reproduce this Article

It’s All About the ‘Experience’