Will GE’s Handheld Ultrasound Become the Next Stethoscope?

Although not quite the equivalent of Star Trek’s tricorder, GE’s Vscan represents a long step forward in mobile medical technology. The handheld device does on-the-go ultrasound readings only, but those readings can give doctors faster, more in-depth info than the best of preliminary doctor exam routines.

Indeed, the BlackBerry-sized unit will likely “become as prevalent as the stethoscope,” said GE CEO Jeff Immelt, as he unveiled the Vscan at the Web 2.0 Summit this week.

Because of its mobile, real-time nature, Vscan can conceivably be useful in hundreds of scenarios.

If a patient should complain of a stomach problem, the doctor could look for an abdominal mass or obstruction right there in the exam room instead of waiting for the patient to get expensive testing, with results perhaps delayed for weeks.

Doctors on the scene at mass trauma events — from hurricanes to plane crashes — could quickly ascertain which patients were most in need of immediate care.

Physicians in the emergency room could quickly identify problems lurking beneath the patient’s noticeable injuries or symptoms.

The life-, time- and cost-savings potential from the use of this device seems virtually endless. If nothing else, Vscan underscores the vital role of mobile technology in medical care, an argument made loudly at the Web 2.0 summit.

GE’s vision is to use mobile devices to save lives and drive down healthcare costs. That vision is currently undergoing a reality check in 12 different facilities around the world.

“We have already completed the clinical testing,” says Arvind Gopalratnam, spokesperson for GE. “Now, we’re in the discovery phase with clinicians to get their input.”

The technology may be tweaked at the end of the discovery phase to better match doctor preferences, he said.

That’s one reason GE is not saying much about the technology. Some of the specs may not be final. Even so, the device is scheduled for commercial release “sometime in 2010,” according to Gopalratnam. 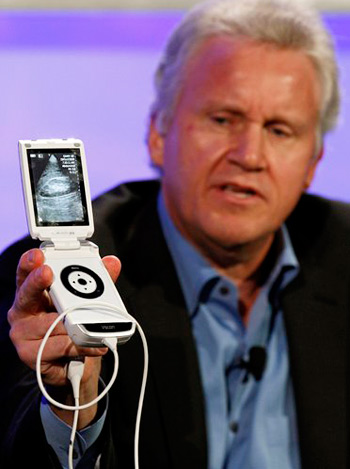 The Vscan is close enough to showtime-ready that Immelt was happy to discuss it at Web 2.0, and Mike Barber, vice president of healthyimagination at GE, was comfortable enough to demonstrate it in a video.

The ultra-thin, clamshell device closely resembles a mobile phone. It has an easy toggle wheel, presents real-time imagery in color, as well as black and white, and has an intuitive interface.

A small wand is attached to it by cable. When the wand is passed over a body part, an image immediately appears on the screen. The doctor can choose whether to view the image in color or black and white.

The Vscan is “very digitally capable,” according to Immelt, but it does not yet have WiFi access.

Nevertheless, the digital capability is significant. One of the areas most often hailed by the healthcare industry and politicians alike as the most sensible place to cut healthcare costs is diagnostics. As a result, digital diagnostics is headed for an extreme growth spurt. GE’s Vscan debut could not be timed more perfectly.

Pricing for the unit is yet undetermined. So is the pricing for the scan at the doctor’s office. Will it be included in the office visit fee? Or, will there be an additional charge?

On the doctor’s side of the equation: Will Vscan use become commonplace in the growing pay-per-performance schedules? Can it be a safeguard against malpractice suits?

Of course, all of this leaves wide open the whole question of how the health insurance industry will handle the information obtained from the scans.