Windows 8.1 Could Get Some Love

Microsoft on Thursday began rolling out Windows 8.1 worldwide over the Internet.

Win 8.1 will be available Friday both preinstalled on new devices and on DVDs at retail locations worldwide. 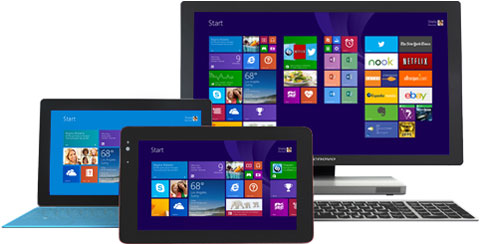 This latest update to its flagship OS has improved multitasking, improved search, a redesigned Windows Store, and new and updated apps.

The Start button, which users have been clamoring for since Windows 8 was released, has been restored.

“Windows 8.1 makes several important changes to the way the product is used that could translate to more user acceptance — or even see users embrace it,” Al Hilwa, a program director at IDC, told TechNewsWorld.

There has been some criticism of the Start menu among early Win 8.1 users.

“With new touch-enabled devices, the Start menu navigation makes no sense,” Mark Bowker, an analyst at the Enterprise Strategy Group, pointed out.

What 8.1 Brings to the Table

The Start screen in Win 8.1 is more customizable. The Apps view lets users see all their apps at once, and Win 8.1 has a Help app.

Win 8.1 lets users display and use up to four apps side by side. Each app can be sized independently, and one app can launch another.

A New & Rising section in the Windows Store notifies users of the latest apps available. The store now has a live tile and makes personalized app recommendations.

Bing search is enhanced in Win 8.1.

“I think the biggest thing Microsoft missed was a terrible mail client for its RT OS,” the ESG’s Bowker told TechNewsWorld. “Now that is fixed and it’s way better, with a full Outlook experience.”

User pezzonovante complained that Win 8.1 would not download, and said the same problem cropped up with Windows 8.1 Preview.

UK user butlerat complained of getting a 403 response when clicking the link to upgrade.

India-based users Karthikeyanp and nitesh.luharuka complained they could not get the update, although the former managed to download it after a while.

What About the Apps?

Microsoft has added several new apps to the Win 8.1 ecosystem, and “they have made good progress, but Apple and Google still have an impressive app marketplace in comparison,” suggested ESG’s Bowker.

“The long tail of apps will always go to the platform with the most units on the market,” IDC’s Hilwa pointed out. “As Windows touch devices make inroads in adoption, this will help the app ecosystem.”

The touch interface is likely to help drive Win 8 adoption in the enterprise, Bowker opined.

“There are also desktop management, security and access capabilities that get real interesting with Win 8, and the enterprise should look into them,” he suggested.

Microsoft’s problem is that Windows is trying to tackle both the mobile and enterprise segments with one OS, Roger Kay, founder and principal at Endpoint Technologies Associates, told TechNewsWorld.

“Windows 8 was serving legacy customers with backwards support, and the high-mobility world which is dominated by iOS and Android,” Kay remarked.

Windows 8.1 continues to do so.