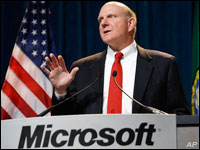 Carol Bartz recently showcased what happens to CEOs who don’t meet expectations — and, given Yahoo’s board may be fired as well, what can happen if a board acts too slowly. Steve Ballmer has been under fire for some time for underperforming as CEO, but one hit could change him from bozo to star if it is big enough, and Windows 8 is big enough. I’ll share my thoughts on Windows 8 and the Intel Ultrabook hardware that could make it into a market star, and what Steve Ballmer could do to either ensure it wins or ensure it loses this week.

I’ll close with my product of the week: a little known non-Apple tablet that the vendor that makes it isn’t talking about but has actually become better alternative for many than the iPad. It may also be the ideal platform for the Windows 9 alpha build.

I got to play with this product last week on a Samsung tablet and to say that I was impressed would be a massive understatement. While it crashed on the stage in demoes, it didn’t crash on me once — and the boot time and performance on an ultra-light product were just amazing. The Metro interface, which I’d grown used to on my Windows Phone 7, felt better than either Android or iOS devices (it should, as it is much newer) and it really felt like a good blend of the Windows stuff I still had to live with and the tablet stuff I wanted to move to.

I covered the Windows 95 launch back in 1995 while working for Dun & Bradstreet’s research division, and this product, for its time in the development cycle, is far more capable and complete than Windows 95 was, suggesting it will hit its launch dates.

Coupled with new hardware from a wider selection of vendors, including Nvidia, Intel, Qualcomm, and AMD, Windows 8 has far greater potential to excite more people who prefer choice than Windows 95 did.

Now, folks who don’t like change will find it less attractive, but that has been true of any major change made by Microsoft, Apple or, most recently, Facebook, so this should be no surprise. Things I’m particularly excited about are: the sub 4-second cold boot time, instant suspend/resume, and massive improvements in power efficiency (providing for lighter weight and longer battery life).

Migration improvements, tighter ties to cloud services (Windows Live), vastly stronger security, and the ability to store and restore settings from the cloud should also appeal to many who use Windows. With the right backing, this product could easily outperform any other product that Microsoft has ever built, and the team behind it is known for high quality and hitting release dates.

Intel’s IDF was also this week, and there they showcased Ultrabooks — a platform that will start showing up in a few weeks but will likely be tied to what we will remember about Windows 8. However, even with Windows 7, these products are showing sub 10-second cold boot times, near-instant suspend and resume, and sub 3-lb. carry weights.

Coupled with new screen technology that caches static images from companies like LG, this will eventually lead to significant improvements in battery life and all-day power usage models in ultra-light products.

If you haven’t seen one, these are stunning products, often made of brushed aluminum (Alcoa evidently wants thousands of them for employees), and they could forever kill our memory of what a laptop computer is.

And that is only Intel. AMD, NVIDIA and Qualcomm all have products they are positioning against the Windows 8 opportunity for a massed resource that is unmatched in Microsoft’s history, providing an unprecedented opportunity for Microsoft to hit this one out of the park. However, there is a good chance it won’t.

The greatest losers in military history are often connected to underfunding. Vietnam was underfunded. When a general suggested that the post portion of the Iraq War was underfunded, he was fired. However, the most memorable case was the British war against the Zulu nation. In the definitive battle, the bean counters nearly killed off their own military by putting cost controls on ammunition.

It is a quick story that I was taught as a child. You see, the military at that time was largely static. There were concerns about cost, so ammunition had to be requisitioned in small quantities, and it was locked in containers like sardines. Only the pursers (and there weren’t many of them) had keys.

When the Zulu nation revolted, its warriors only had spears, but they outnumbered the British army by 10 to one. Against modern weapons, that wouldn’t have been near enough; however, against soldiers who had no more than bullets each and had to requisition ammunition, it ended badly. Many of the pursers were shot before the army was overrun and virtually killed to the man in one of the biggest massacres in history.

The inflation-adjusted budget for Windows 95 was around US$300 million, and it didn’t face anything like the iPad or Google. It also ran out about halfway through the launch, suggesting that for Windows 8 — since that product faces more of an uphill competitive battle — the budget should be close to a $1 billion to ensure success (a fraction of what Yahoo would have cost to buy and fix, or what Microsoft spends on its less-strategic search offering). I’ll bet it’s less than a third of that.

Wrapping Up: Winners and Losers

Over the years, I’ve seen a lot of things separate losers from winners. One of the biggest is the tendency to spend what they think the effort is worth and not first find out what it would cost to ensure success, and thus waste what they do spend.

A lot of large companies fail not because they don’t have the potential for success, but because they are doing too many things and can’t afford to properly fund all of them. The result is they don’t properly fund any. This is true in personal life as well; if you calculate what it costs to do things well and prioritize those things you really want to do, you’ll likely have more successes and waste far less time and money. I can think of at least one government that needs to learn this lesson as well.

For Steve, this will mean the difference between having a meeting like Paul Ottellini had recently with Andy Grove, where Grove announce Paul had out executed anything he had done, to one far less enjoyable with his friend Bill Gates. I still believe Steve could be remembered as a great CEO, but I increasingly doubt that outcome. This may be his last real chance to step up.

I ran into this by accident while I was running between meetings last week. Most of us have been lamenting the poor performance of Android-based tablets, with the possible exception of the Samsung Galaxy, which is almost an exact copy of the iPad (and has been blocked by Apple in a number of countries because of this).

The funny thing is, there is actually another tablet that has quietly been selling in decent numbers, for a non-iPad. It won’t scare Apple, but it has done well largely because it will run Windows applications and handle Flash (and you’d be surprised how many websites still use Flash). 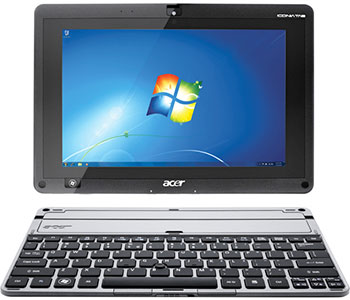 It is the Acer Iconia Tab W500, which retails for as low as a modest $498 (at the time of this writing on Amazon) and fits into the general iPad usage model (on couches and in bed).

Unlike the iPad, it includes a keyboard dock, so you can actually use it like a laptop if you want. You are looking at a sub 5-hour battery life, but it has a keyboard option, it is priced in the iPad’s range, and you don’t have to learn a new OS. Plus, all of your Windows stuff works on it — it will even run the full Windows Live client for games).

If you want to mess with the Windows 8 alpha product, this could be the ideal hardware for it (I haven’t tried this yet myself). You know, I had to pick something that might work with Windows 8 as my product of the week, and the Acer W500 tablet makes the grade.