As I write this, the U.S. has deployed a battle group to Syria in preparation for a missile strike against the government there, and Russia has deployed what appears to be a counter force. What most seem not to be factoring in is that Syria has already fired its warning shot with attacks on Twitter and The New York Times, at least.

I say “at least,” because reporting of attacks isn’t comprehensive, and other attempts may have failed, so Syria’s first strike may have been far larger than initially reported. (Update: Many other attempts have now been reported.)

The U.S. has a tendency to overreact, and it is clear there’s insufficient preparation for the infrastructure collapse that could occur when Syria responds to a missile attack — and Russia exists as a wild card that could cause the conflict to spread rapidly out of control.

It’s been common knowledge for some time that the U.S. infrastructure is vulnerable to outside attack and that governments like Syria and China have been probing it and probably know exactly where and how to do the most damage. There’s a very real likelihood that this time the U.S. won’t go unscathed, and it may be prudent to have a plan in place should things go very, very wrong.

I’ll close with my product of the week: the US$159 Kindle Fire.

The war in Iraq was a perfect example of confirmation bias. This occurs when you make a decision based on inadequate information and actively attack any other information, real or false, that disagrees with it. The war in Iraq was started to eliminate WMDs that we should have known didn’t exist in the first place. This is why I think Syria’s attacks on The New York Times and Twitter haven’t been covered as a warning shot, even though they were sourced to Syria’s military.

The services that were hit, which included the domain provider for The New York Times, are relatively more secure than much of the U.S. infrastructure. They are comparatively well funded and they are regularly subjected to unsuccessful attacks. The latest attacks did no lasting damage and didn’t appear to have any other real purpose than to show capability. The likely reason they didn’t target infrastructure is that Syria didn’t want to provoke a response, given that the U.S. had already said that such an act would amount to a declaration of war.

However, once missiles are fired or bombs are dropped, that would become a moot point, and Syria’s officials would be fighting for their lives and more likely to do real damage in order to get the destruction to stop. That means the U.S. would need to remove the capability. If the Syrian government is smart, it will have distributed that capability into population centers, making it nearly impossible to stop it without eliminating the country’s communications infrastructure — something Russia is likely to object violently to.

I doubt anyone wants this to escalate to a full-on war, but if you recall that the Second World War — at least, the Japanese part — was largely the result of series of mistakes, you’ll see a reason for concern. Japan, which had been blockaded by the U.S., wanted the U.S. to remove the blockade and knew it couldn’t win a protracted war against the U.S. Its intent in striking Pearl Harbor was not to start a war but to warn the U.S. off.

However, because U.S. aircraft carriers weren’t in the harbor, and because the U.S. had prepared for a terrorist type of attack, the damage — while very personal — didn’t significantly reduce its capabilities. So, due to mistakes on both sides, the U.S. got really pissed, and both countries lost a lot of lives. Strangely, you could argue that both countries later ended up stronger together than they were separate, but you couldn’t argue this path or result was part of a plan — only an accidental benefit following massive costs.

The U.S. infrastructure is very fragile, and a cyberstrike could darken much of the country, scaring a lot of people badly and resulting in a loss of life that would be staggering. (According to recent studies, the power grid is so fragile it may fail anyway). For instance, if you take out a significant enough portion of the power grid, you will likely overload much of the rest, and transformers tend to explosively fail when put under this kind of strain. So Syria might intend to darken New York or Washington as a further warning but end up taking out a good chunk of the U.S. — and the opportunity for massive retaliation would go through the roof.

Now Syria isn’t Japan, but we live in an Internet world where there are a lot of things that are connected and not properly secured. Air Traffic control, power and water, even street lights are increasingly connected, but not secured against a government-class threat, and Syria isn’t the only country with this capability that has a bone to pick with the U.S. Iran (I’m clearly not the only one concerned about this) or North Korea could use this as an opportunity to extend the damage under the belief that Syria would take the blame and Russia would aggressively step in.

I do think that in the next days/weeks this is likely to go really sideways, and it may be wise to be prepared.

If you live in places where earthquakes, hurricanes or tornadoes are a fact of life, you probably have a disaster kit. This is a good time to check and make sure nothing is out of date. Water should also be checked, and you should review with your family rally points and the location of shelters should telecommunications go down.

I’d expect the outage to be days to weeks, and in places with high crime rates, such as Oakland, Calif., there may be large-scale looting and the potential for violent riots. You don’t want to be on the wrong end of those things, so knowing where not to be should be communicated.

Have a radio that runs on batteries and know what your local PBS station or emergency broadcast station is so you can get updates. If folks are out of town, rushing home could be a mistake, as the outages will likely cascade and you could find yourself stuck in-transit. You are probably better off to get someplace close that is safe and then when more is known, form a plan based on what you find out.

What you don’t want to do is panic. If you have a plan, you will be better able to protect both your life and the lives of your family. It goes without saying that if the government is going to aggressively attack foreign states in this Internet age, it should do more to harden the country and have broad drills to prepare for likely outages. Until the government gets a clue, it may be wise to be prepared. By the way, as a side note, I’m told that every store in my area has been sold out of ammunition for some time — every shipment that comes in sells out in hours — which I take to be a bad sign.

Product of the Week: The $159 Kindle Fire

I love a bargain, and given that we all may be enjoying our Kindles by firelight soon, when I saw the price for the Kindle Fire drop to $159, this just seemed like a huge deal. 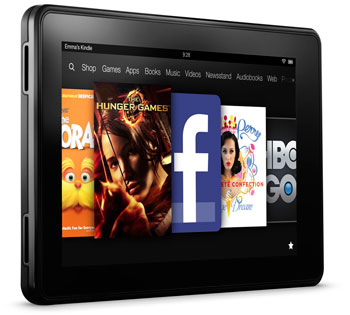 Now I’m a Kindle addict — I own every one ever made, and you’ll never see me without one of them. Granted, we are likely weeks away from Amazon launching a new one, but I know folks who are still on the first generation (this is the second) and they are perfectly happy.

Apps have expanded a great deal over the years, and I now get my email on my Kindle, do much of my Amazon shopping, and regularly watch movies from Netflix or Amazon Prime. I don’t game on it yet (preferring the Nvidia Shield device for that), and I’m still impressed with battery life in the 8-hour range. Even though I read a lot, I’m charging mine every two or three days.

I was thinking of the two things I’m likely to grab if I have to run to a shelter, and they are my Nokia 1020 phone and my Kindle Fire. At $159, it’s pretty cheap for a product I simply can’t seem to live without. As a result, the price-reduced Kindle Fire is my product of the week.