Xbox One vs. Shield: Evolution vs. Revolution

There is an interesting battle forming between the most powerful game console with the most potential, Microsoft’s Xbox One, and Nvidia’s Shield — a rebel platform that I think is worth a look.

Both platforms are going after a gaming opportunity, but they are approaching this market very differently. Microsoft is pushing the envelope on the breadth of things a console can support and variety in the user interface, while Nvidia is creating a device focused on gaming in a wide variety of modes — moving from mobile gaming to console-like gaming, to remote control for personal drones and remote-control vehicles new to this segment.

This last creates a potential augmented-reality bridge we haven’t seen attempted at this scale. You may wonder why I didn’t pick the PS4 since it is more of a pure gaming play than the Xbox One, and I’ll answer that first as we drift toward the battle between gaming/entertainment evolution vs. gaming revolution.

I’ll close with my product of the week: a technology that could revolutionize cellphones and tablets that is one big step closer to coming to market — the Qualcomm Mirasol display.

The reason I’ll be focusing on the Xbox One as the segment leader rather than the PS4 — or the Nintendo Wii, for that matter — is that the Wii just seems to have missed the market and Sony is simply too weak to take on Microsoft now.

Sony is still in the midst of a recovery, and its huge mistake with the PS3 damn near took it out of the market, allowing first Nintendo and then Microsoft to beat it handily. Sony literally took a product that was at one time more profitable than Apple’s iPod and turned it into an unprofitable liability, and you don’t jump back from that overnight.

Microsoft’s Xbox currently is the most successful console in the gaming segment. True, Microsoft is also far from its peak — but with billions of dollars in reserve, it is vastly more powerful than both Nintendo and Sony, and consequently is able to be far more aggressive with technology and content. It will be the one to beat in the traditional console segment.

The Xbox One is an impressive piece of work with one disappointment. That disappointment is the inability to play older games, but this tradeoff was likely necessary given how old the Xbox 360 is. In the last eight years, PC technology has changed massively, and with the likelihood the Xbox One will need to be in market for years, it has to anticipate future technology needs.

The gap between systems was just too large to bridge reliably, and given that anyone who wants to play an old game has an Xbox, and that switching between systems is easy on current receivers and TVs, Microsoft took a reasonable risk.

There are some impressive advancements in the Xbox One, including major improvements to the Kinect controller in both cost and capability. The most obvious improvement is the ability to measure your pulse, which is critical to exercise games. In addition, there’s improved voice command support, which should improve interaction with the system. Microsoft has had several decades to fine-tune microphones and voice command technology, so it should work reasonably well.

Game support is strong, with a variety of top titles coming to the platform either exclusively or in conjunction with PS4 titles. The use of a common AMD-based hardware architecture should lower the cost of developing for both of these platforms and strengthen both the number and quality of games as a result of the related cost reduction and risk.

Most interesting is a set of exclusive live action shows and blended games that very closely tie together gaming and TV watching, which could evolve into a very different experience. This is a major step up from what we have been able to do with consoles, and it takes the idea of a smart set-top box to another level, creating what could be — depending on content — the broadest alternative to the traditional cable service we have yet seen.

However Shield, also coming out this year, is a whole different animal. This is a handheld gaming system that can emulate a console experience and can either use your TV or its own display in-home or on the road.

While this too can play media, it is more of a gaming pure-play and is designed around a gaming controller. Think of a whole different kind of gaming — one in which each player has a first-person pilot’s or driver’s view out of the controller screen and can see the game board, track or strategic map on the TV, and one in which multiple players can play very different roles.

For instance, one player in a Dungeons and Dragons format could be the Dungeon Master, defining the game the other players are playing in real time and making God-like decisions that affect them. You could even have competing masters playing Satan- and God-like roles with in-game players on good and evil sides for the kind of game play that would be very difficult to experience with more traditional consoles.

In addition, Shield is arguably the best drone/remote control vehicle controller ever created, because the screen, coupled with a camera in the remote vehicle, puts you into the driver’s or pilot’s seat. With augmented reality, you could be flying drones but seeing dragons. You could have battles with damage recorded digitally, leaving your expensive remote-control vehicles unharmed but letting you experience a level of reality that you couldn’t get in a game alone, because you are actually flying real things.

Shield is a revolution as a result, and it will likely take years for developers to explore the full gamut of the system’s capabilities.

Wrapping Up: Xbox One vs. Shield

If this were three years ago, the contest would be a no-brainer, and Microsoft would win. It’s not, though, and developers have been leaving the consoles in droves or taking their efforts to iOS and Android with limited success.

That means Shield, which runs Android, is where they are now. Still, to make Shield shine, it needs games developed for it — not rehashed Android phone or tablet games.

Xbox One has to entice developers back and convince buyers both to leave their Xbox 360 in place and to buy a new gaming system to work with it . There is no obvious synergy in having both an Xbox 360 and Xbox One; nor is there an easy way to leave both versions of Kinect installed. So the transition will be ugly.

It likely will come down to which system gets that one game or experience most people must have. We’ll see — but the race will be fascinating to watch, because this is evolution against revolution, and that kind of competition can be very exciting.

If you want to talk about a technology I want so bad I can taste it, the product is the Qualcomm Mirasol display. This is the transflective screen technology that promises the flexibility of the original Kindle in terms of outdoor compatibility and massive battery life, with the capability of the Kindle Fire in terms of video and gaming. 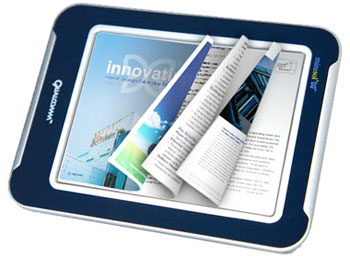 In short, Mirasol promises a Kindle that is the best of both ePaper and LCD. The problem is this display class has been a combination of too expensive and underperforming in terms of both speed and color depth.

Well, last week Qualcomm demonstrated it could create a 5.1-inch Mirasol display that approached the color capabilities of an LCD and the speed of an LCD, with resolution approaching the stunning Apple Retina Display.

While the colors still are likely not bright enough to replace a traditional tablet or cellphone, for a reader-focused product like the Kindle, where outdoor capability would have a higher priority, it could be ideal.

Smartwatches are pretty worthless if they wash out in the sun, so here too the Mirasol display could shine.

Getting this right could take us back to the days when our cellphone batteries lasted more than eight hours. Plus, we could use our laptops, tablets and e-readers while sitting in the sun, and have smartwatches we could use outside. Even in-car displays in convertibles would become far more useful — the one in my car washes out when the top is down.

I so want this product to work that even though it isn’t shipping in final form, I’m making the Qualcomm Mirasol display my product of the week.