HP on Thursday announced that its research arm, HP Labs, has discovered that the “memristor” — a resistor with memory — can perform logic. 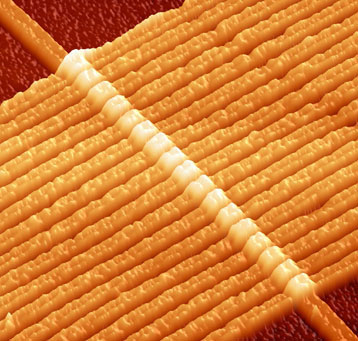 A circuit with 17 memristors

HP researchers have designed a new architecture that stacks multiple layers of memristor memory on top of each other in a single chip. Together with the taking over of computation from specialized CPUs, this could be used to create handheld devices with 10 times the memory of today’s products, among other things.

Memristors express memristance, which is a property of an electronic component that “remembers” the last resistance an electrical circuit had before it was switched off.

Here’s the really cool thing about memristors: Memristance strength is in inverse proportion to the size of the circuit. In other words, the smaller the circuit, the stronger the memristance and the more powerful the memristor.

This is one of the features that make memristors so attractive to manufacturers, because they can offer increasing capability in smaller devices, and these devices require less power.

“The technology has the potential to scale down to the molecular level, so it would certainly help us scale chips down to continue Moore’s Law,” Carl Howe, director of anywhere research at the Yankee Group, told TechNewsWorld.

Other memristor features that manufacturers like are their speed (memristors are faster than solid-state storage technologies such as flash memory), their capacity (they can store at least twice as much data in the same area as flash technology), their durability (they are almost immune to radiation), and their memory retention (they let manufacturers build computers that turn on and off like a light switch because they do not forget).

Memristive devices can operate in digital or analog modes. Each of these has different applications.

In digital mode, they could replace solid-state flash memory with faster, less expensive non-volatile random access memory. This could enable the creation of digital cameras that don’t need to pause between taking photographs, or computers that save power by turning themselves off when they’re not needed and turning themselves on again when in use, without losing memory.

In analog mode, memristors may let manufacturers build computers that learn what users want through pattern-matching abilities that would let it change its user interface according to how the owner uses the device.

HP has already created development-ready architectures for memory chips using memristors. It believes such chips could become commercially available within the next few years.

Perhaps HP is being too optimistic about the timeframe. “Like any other memory architecture or memory solution, it takes high volumes and large amounts of investment before it makes sense to go to manufacturing,” Jim McGregor, chief technology strategist at In-Stat, pointed out. “Any time somebody says something is feasible in the next X number of years, you can probably double or triple that figure.”

Still, HP Labs has already come out with a nanoscale memristor switch, which it built in June of 2008, showing that it has the capacity to build out memristive devices. Measuring 50 nanometers square, the switch contained a layer of titanium dioxide between two nanowires.

Titanium dioxide is the stuff used in sunscreen and white paint. Its molecules consist of one titanium atom bonded to two oxygen atoms. HP Labs scientist Jianhua Yang found that by subtly manipulating the distribution of the oxygen atoms, he could control how the device functioned.

HP is initially targeting handheld devices. Eventually, memristor-based processors may replace the silicon in e-reader screens, and might succeed silicon on a larger scale, HP contended.

That might just work, McGregor told TechNewsWorld. “The market for handheld devices, which is a billion-unit market, is the biggest driver of silicon today,” he explained. “To remain competitive, you have to keep handheld devices very small.” This might drive the adoption of memristive chips.

Taking Memristors to the Next Level

HP also has designed a new architecture within which multiple layers of memristor memory can be stacked on top of each other in a single chip. In five years, such chips could be used to create handheld devices with 10 times the embedded memory of their counterparts today. They could also be used in supercomputers.

Here too, as it’s doing with its plans for memory chips based on memristors, HP may be aiming a little too high.”I think the achievement is incredible, but I still doubt that we have any concept of if or when it would be used in manufacturing,” McGregor said. “This is one of several technologies that could advance semiconductor design and manufacturing if it can pass the manufacturability test.”