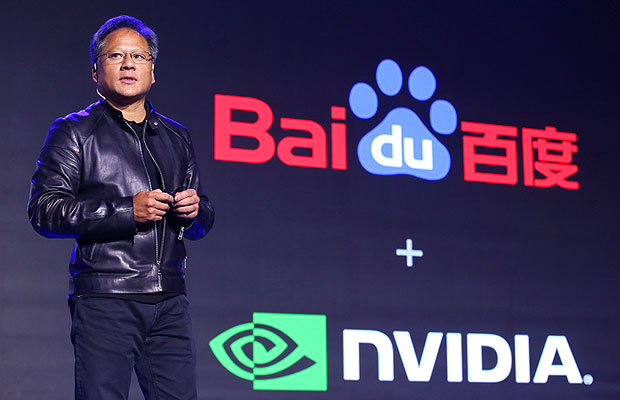 Nvidia and Baidu have agreed to collaborate on the incorporation of artificial intelligence in a cloud-to-car autonomous vehicle platform, Nvidia CEO Jen-Hsun Huang said Wednesday at the Baidu World Conference in Beijing.

The companies plan to integrate Baidu’s cloud platform and mapping technology with Nvidia’s self-driving computing platform. They will work together to create solutions for high-definition maps, Level 3 autonomous vehicle control and automated parking.

“We’re going to bring together the technical capabilities and the expertise in AI and the scale of two world-class AI companies to build the self-driving car architecture from end-to-end, from top-to-bottom, from the cloud to the car,” Jen-Hsun said.

Baidu likely could utilize the technology for its own taxi fleet as well, as it recently invested in Didi Chuxing, which last month announced a deal to take over the Chinese operations of Uber.

Nvidia acquired its reputation in the tech world for developing graphic processing units (GPUs) and systems on a chip (SoCs) for mobile computing. However, the company in recent years has expanded into the automotive market. It transitioned two years ago into a platform company focused on four markets: gaming, professional visualization, data centers and automotive.

As part of that transition, Nvidia already had developed a working partnership with Baidu to develop AI technology for vehicles, including advances with in-car supercomputers and AI algorithms. The latest step could result in even greater convergence of the two firms’ technologies.

“The partnership between these two giants is to bring a high-quality 3D Map that is connected to cloud and continuously updated to support highly automated and fully autonomous driving,” said Frost & Sullivan Mobility Research Manager Praveen Chandrasekar.

“Baidu brings its cloud and mapping capabilities, and Nvidia will be using its Drive PX2 supercomputer AI platform to co-create this framework,” he told TechNewsWorld.

“Essentially the two entities are creating a support framework that will provide a highly localized mapping system that will enable the vehicles to plan for a longer distance beyond the reach of the conventional sensors,” Chandrasekar added.

This move could allow Baidu to expand outside out of Asia.

“Baidu dominates China much in the same way Google dominates the Web in the rest of the world,” said Rob Enderle, principal analyst at the Enderle Group.

“Google is heavily invested in autonomous cars and pictures a future where we no longer drive but ride in cars largely entertained by Google properties consuming ads Google makes money from,” he told TechNewsWorld.

“Baidu clearly wants into that vision, and partnering with the leader in car-builder-independent technology should be a faster way to get there than going on their own,” Enderle added. “Like Google, Baidu not only wants to provide entertainment but this critical back end, because they know that one could easily lead to the other.”

The reason so many tech firms have become involved in the self-driving space is that the ones crossing the finish line will have some serious rewards to reap. However, the exact goals and rewards may differ across the firms.

“Basically, OEMs get another choice for HD maps beyond the conventional ones like HERE, TomTom and startups like GeoDigital and Sanborn,” explained Chandraeskar.

As with Google, Apple and other players, Nvidia likely will face challenges that are unique to the automotive world.

“For Nvidia, the biggest problem is that — outside of some supercars — the auto industry tends to like to develop their own technology and not rely on third players,” said Enderle.

However, “that has been changing of late,” he added, “particularly with ever-more-computerized cars.”

Baidu is largely new to this space, and “that will make for a very sharp learning curve for them,” Enderle pointed out. “Chinese companies, with few exceptions, aren’t good at taking their products to the Western world, so growing out of China could be problematic.”

Another significant hurdle is the time required to get these solutions to market.

“HD maps curating and developing takes a long time, because every segment of the road network needs to be mapped,” Chandraeskar noted.

“Companies like Google and HERE have been doing this for years and accumulated over one million miles in coverage,” he said, “but since Baidu has an amazing presence in China and that is the first focal market, this partnership can essentially get up to speed very fast and deliver a product real fast.”