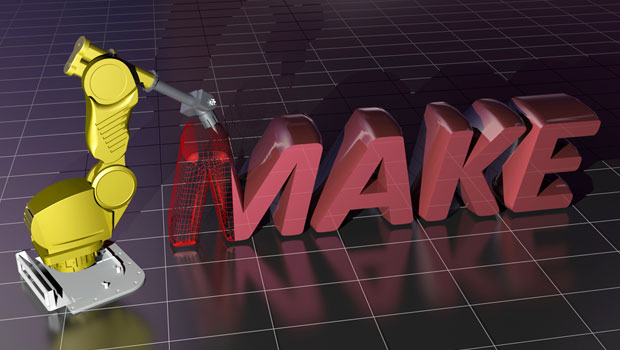 While hobbyists, inventors and innovators alike have been experimenting and producing a variety of do-it-yourself projects, their world is expected to undergo a hard shift as DIY moves to the next level.

3D printing is the cornerstone of the coming shift, and its effect on our daily lives will be multiplied by several converging forces: the collaborative economy, the jobless economy and the age of personalization.

As these three very different economic forces bear down on DIYers and their tools — especially 3D printing and related tools — the market will shudder hard and eventually reboot. Here’s how that will work.

“It’s the economy, stupid,” Bill Clinton famously said in his first presidential campaign. It’s true: Economic forces are fueling and forging the next level of DIY.

What’s the difference? The sharing economy subset is about sharing or renting goods rather than buying them. Examples of that are ride-sharing company Uber and home-sharing company Airbnb. The overall collaborative economy encompasses the sharing economy plus other collaborative, peer-to-peer activities such as crowdfunding, peer-to-peer lending, and task-sharing, such as TaskRabbit and Instacart.

So, yes, technology made these companies possible, but it was the recession and its aftermath of uncertainty that made the new business models attractive. It’s common for such services tosave users 25 percent or more over the total cost of ownership of traditional services.

Another recession likely would spur developments in the collaborative economy.

A similar dismal economic force afoot could add to both overall economic uncertainty and the rising rolls of the poverty-stricken: the new jobless economy. While it’s true that the U.S. has beenadding jobs steadily since the recession, it is also true that job growth is slowing as increased use of automation replaces human workers.

Eventually, job growth could stall and fall in the wake of mass automation. Machine learning and eventually artificial intelligence would see a dramatic erosion of even more jobs.

Already,an algorithm is serving as a board director. No job is safe from automation — hence the term “jobless economy.”

As more people have trouble finding work that pays enough to survive on now, many of their needs remain unmet. Further, government has yet to address what comes next: what to do in the face of mass unemployment brought about by a jobless, fully automated economy.

There would be a lag before government could reform the economic structure to meet basic human needs, most likely through the establishment of auniversal paycheck. Meanwhile, more people would struggle and more needs, even the basics, could go unmet.

The next level of DIY likely will take the form of meeting the new market demand for essentials.

“The biggest impact will come when digital DIY is allowed or pushed to move down the pyramid of needs, from gadgets for first-world problems to agriculture and mass customization of low-tech objects that everybody already needs and use,” said Marco Fioretti, leader of Work Package 8: dissemination, future road map and sustainability atDigital Do It Yourself. He spoke on his own and not in his capacity at DiDIY.

The DiDIY Project is a European initiative partially funded by the European Union’s Horizon 2020 research and innovation program and consisting ofseven partners, all European universities and research institutions.

Fioretti has spent his career in Silicon Valley and Italy and is both an engineer and a tech writer.

Hence, we’ll see the expansion of DIY to include the production of goods and parts for everyday needs.

From Virtual Store to Personal Factory

“DIY 3D printing is part of a growing trend towards the personal factory,” saidLykle Schepers, co-owner of Zesty Technology.

“This is shown not only in 3D printing, but also in the proliferation of small CNC machines,” or computer-controlled machining tools, “desktop laser cutters, and there are now even small injection-molding machines. The 3D printer fits perfectly into this trend,” he told TechNewsWorld.

Schepers has his own personal factory at home. Previous to the startup, he was an engineer designer and worked in the CAD sales department at IBM. He’s been designing and modeling all his life, he said. 3D printing is just a natural extension of his skills.

“I use my printer to print shapes that I use as molds for aluminum casting I do in the backyard. I use the aluminum parts for a custom bike I am building,” he said.

That’s the gist of a personal factory — home manufacturing tools that enable you to create and produce whatever you desire or need. Necessity is the mother of invention, so invention will spring forth from areas that are suffering the most.

“The most relevant applications of 3D printing and other digital DIY in general may very well come not from Silicon Valley, but from places in dire straits, like Greece,” Fioretti told TechNewsWorld.

Personal factories will exist for reasons of survival and artistic expressions, and they might become income generators and micro or small businesses.

“Digital DIY does not necessarily create more economic activity — not of the kind that increases GDP at least — but for people who live paycheck to paycheck or off their pensions, it can be a big help,” Fioretti said.

“In other words, digital DIY can increase resiliency, both at the personal and community level, from DIY Internet access network in rural areas to increasing local food production through hydroponics, crop and cattle monitoring, and other things such as telemedicine, etc.,” he added.

“Social makerspaces — that is, places that 3D print, CNC mill, etc., on-demand — would also create service jobs that cannot be outsourced and are cool,” Fioretti said. They would “give youngsters both help to stay in the local area and not migrate to find a job, and skills they may reuse later on in other jobs.”

From Personal Factory to Community Factory

Given the economic forces at work here, personal factories also may be out of reach for the people who need them most.

“To make sure that it is accessible to everyone, even and especially senior citizens, disabled people, working single mothers with children — who for a lot of valid reasons could never afford to spend time in a fab lab or could never realistically do it because they don’t have the right skills, nor can they realistically acquire them — makerspaces and fab labs instead should help these people too and make things as needed for the community,” Fioretti said.

The shift from DIY as we know it to creating things to help neighbors, family and friends is what he called “digitally do it for others.”

“A 3D printer in every home would be a terrible waste of resources! But an on-demand making space on every block that everybody could use to make copies of objects, much like we already do today at any copy shop, … would be a game-changer,” Fioretti said.

The Age of Personalization

However, DIY’s next level will be not just about survival in a jobless economy or another recession, because something else is afoot. The third economic force affecting DIY is the age of personalization, wherein consumers prefer unique items over mass-produced, identical products. The trend is much of the reason for success in the DIY space for artisans.

Even wealthy patrons areshunning logos and brand names on merchandise, in part because they don’t wish to appear gauche when so many are struggling financially, but also because they too want to express individuality rather than conformity.

Commercial companies are trying to capitalize on the trend by allowing customers to add their personal touches to otherwise mass-produced goods, such asNike has done with its NIKEiD line of products.

However, commercial interests will find it much tougher to compete with personal factories.

Outsourcing too is slated for a tough challenge ahead.

“Imagine the potential for those DIY robotics individuals who can now print simple circuitry with conductive filaments. With this wide range of filaments available at affordable prices, we’re going to see a lot of new innovation in personal workshops without having to waste precious time outsourcing parts to manufacturing companies,” he told TechNewsWorld.

As a result, DIYers soon may profit as much in the brick-and-mortar space as in virtual marketplaces.

“3D printing is going to get faster, cheaper, will increase the size of the output and be able to print in full color with various materials,” said Tim Lynch, CEO atPsychsoftpc.

“This will lead to a much more diverse use for 3D printing. Products will be customizable and made on demand. There will be shops or mall carts springing up offering individualized, on-demand, highly customized 3D printed items,” he told TechNewsWorld.

The next level for DIY is distributed manufacturing at scale and the birth of an entirely new market force. Indeed, it already looks to be a hard reboot of the economy.